The Reds have signed right-hander Walker Lockett to a minor league contract, Bobby Nightengale Jr. of The Cincinnati Enquirer reports (Twitter link).  After working as a starter and a reliever during his MLB career, Lockett will be built up for rotation work for Cincy.

Lockett has a 7.67 ERA over 54 MLB innings, appearing with the Padres, Mets, and Mariners from 2018-20.  Primarily a groundball pitcher who didn’t generate many whiffs in either the minors or majors, Lockett had trouble keeping the ball on the grass in the big leagues, allowing 12 home runs over his 54 frames of work.

There were signs of improvement for Lockett in 2021, however, after he signed a one-year deal with The Korea Baseball Organization’s Doosan Bears.  The right-hander posted a 2.98 ERA, 20.74% strikeout rate, and only five homers allowed over 124 innings of KBO League action.

Lockett started all 21 of his games for the Bears, and he has worked primarily as a starter throughout his minor league career.  It makes sense that the Reds would keep him stretched out to see what he can provide as possible rotation depth for some point this season.  In what is already looking like a lost year for Cincinnati, some rotation vacancies could open up should the likes of Luis Castillo or Tyler Mahle be traded before the deadline.

Dec.  22: Lockett and the Bears are in agreement on a one-year contract, MLBTR’s Tim Dierkes reports. The agreement is still pending completion of a physical.

Dec. 20: Right-hander Walker Lockett is close to signing a deal with the Doosan Bears of the Korea Baseball Organization, according to multiple Korean media outlets (hat tip to Daniel Kim of ESPN and DKTV).  The Blue Jays hold Lockett’s MLB rights, as Kim notes, so there will likely be some money changing hands between the Bears and Jays to complete the transaction.  Lockett is represented by O’Connell Sports Management.

The move to Seoul will send Lockett to his fourth different organization in as many months, as the Mariners claimed the righty away from the Mets in September, and Toronto claimed him from Seattle two weeks ago.  Lockett is coming off a season that saw him post a 4.96 ERA, 2.75 K/BB, and 6.1 K/9 over 16 1/3 combined innings with the Mets and Mariners.

Modest as those numbers are, they represented a big improvement over the 8.84 ERA Lockett delivered in his first 37 2/3 innings in the Show (with the Padres and Mets in 2018-19).  After allowing home runs at a 2.4 HR/9 pace in those first two seasons, Lockett had a somewhat more palatable 1.1 HR/9 in 2020, and he also allowed much less hard contact than in 2018-19.  Lockett made the cutter into a much more prominent part of his arsenal in 2020, throwing the pitch over 20 percent of the time.

Lockett started eight of his 20 career MLB games and was a regular starter in the minors (97 of 114 games), so it seems probable that the Bears will give him another look out of their rotation.  A fourth-round pick for the Padres back in the 2012 draft, Lockett is still only 26, and has posted decent numbers over nine minor league seasons, relying on lots of grounders rather than big strikeout totals.

The Blue Jays have claimed right-hander Anthony Castro off waivers from the Tigers, per an announcement out of Detroit. The move drops the Tigers’ 40-man roster down to 39 players. Toronto has also claimed fellow righty Walker Lockett from the Mariners, according to Seattle. The Jays now have a full 40-man roster.

Castro, 25, made his Major League debut with the Tigers this past season, albeit pitching in just one inning with a pair of runs allowed. Scouting reports on Castro tout his plus fastball and a potentially plus slider, but his command (or lack thereof) has proven a notable issue to this point in his pro career. Castro has 112 1/3 innings under his belt at the Double-A level but has issued 77 walks in that time. He logged a more palatable 3.3 BB/9 in 116 2/3 innings at Class-A Advanced in 2018, but he also plunked a dozen batters in that time

Castro had Tommy John surgery in 2015, wiping out that entire season for him in addition to part of the 2016 campaign. The Tigers have used him primarily as a starter, but as FanGraphs’ Eric Longenhagen pointed out in his scouting report last year, there’s some belief that he could maintain a heater in the upper 90s with that promising slider if used in a short relief role. It’s not clear how the Jays plan to utilize Castro, but he has a pair of minor league options remaining, so they can be patient with him if they keep him on the roster into the 2021 season.

Lockett was a waiver claim from the Mets on Sept. 1, but the 26-year-old didn’t last long in Seattle. He did throw 8 1/3 innings of four-run ball in the Mariners’ uniform, but that wasn’t enough to convince the club to retain him. Before his short Mariners tenure, Lockett – a fourth-round pick of the Padres in 2012 – had difficulty as a swingman with the Pads and the Mets. So far, Lockett has pitched to a 7.67 ERA/5.91 FIP with 6.5 K/9 and 3.33 BB/9 in 54 innings in the bigs.

The Mariners have claimed righty Walker Lockett off waivers from the Mets, as per a Mariners press release.  New York designated Lockett for assignment earlier this week.

The long ball has plagued Lockett over his brief MLB tenure, as a 2.2 HR/9 over 45 2/3 career innings is largely responsible for the 8.28 ERA he has posted over parts of three seasons with the Mets and Padres.  Lockett consistently posted strong ground-ball rates over his minor league career but has yet to translate that skill at the big league level, with just a modest 44.9% grounder rate in the Show.

Lockett is out of options, so Seattle will have to include him on its active roster or risk exposing him to the DFA wire once more.  There’s little harm for the rebuilding Mariners in seeing if Lockett could fit into their future plans, as he has a solid track record as a starter in the minors and could also be potentially deployed for relief work.

The Mets have designated right-hander Walker Lockett for assignment, Tim Healey of Newsday was among those to report. His roster spot will go to lefty David Peterson, who’s coming off the 10-day injured list.

In what could go down as his final Mets appearance, Lockett threw two scoreless innings to pick up a win over the Yankees on Friday. For the most part, though, success has eluded Lockett as a Met. Since they acquired him from the Indians in a deal for catcher Kevin Plawecki before 2019, the 26-year-old Lockett has recorded an 8.16 ERA/5.96 FIP with 6.59 K/9 and 2.51 BB/9 in 30 1/3 innings. Lockett did pitch well last year at Triple-A (3.66 ERA with 5.9 K/9 and 1.7 BB/9 over 59 frames), but as someone who’s out of minor league options, he may have a harder time latching on elsewhere in the next week.

Meanwhile, the return of Peterson will be a welcome one for the Mets, as the rookie began his career with a 2.91 ERA/4.03 FIP and 7.06 K/9 against 3.32 BB/9 across 21 2/3 innings before going to the IL on Aug. 18 with shoulder fatigue. Peterson has been the Mets’ top complement to ace Jacob deGrom so far this season.

Infielder Jed Lowrie and pitcher Walker Lockett will open the season on the injured list, the Mets informed reporters including MLB.com’s Anthony DiComo (Twitter links). The former will be placed on the 10-day list, while the latter will go on the 15-day list under the newly tweaked rules.

Lowrie’s left leg remains shrouded in both mystery and braces. The 36-year-old veteran has not yet contributed to the Mets since signing a two-year deal in the 2018-19 offseason. He has finally made some progress but obviously still isn’t in game shape.

As for Lockett, he’s said to be dealing with a lower back ailment. It’s not yet clear just how long he might be sidelined. Lockett has yet to fully establish himself in the majors but had seemed to be lined up for an active roster spot to open the year. He’s out of options, so will need to be moved onto the active roster or exposed to waivers once he’s healthy.

While dealing with the news that Robert Gsellman is likely done for the year, the Mets have made another roster move. Veteran Rajai Davis was added to the 25-man roster, tweets The Athletic’s Tim Britton. Signed to a minor-league deal, the 38-year-old Davis hit .287/.334/.410 in 84 games for Triple-A Syracuse. This will be his second stint with the team this season after appearing in four games in late May, which included a big pinch-hit, three-run home run to down the Nationals on May 22nd. Let’s check in on a corresponding move, as well as some injury updates coming out of Queens…

After being generally harangued for their win-next-year approach at July’s trade deadline, the Mets have ripped off an 11-5 record this August. At 63-60, New York sits just 2.0 games back in the NL Wild Card race. But if the Mets are going to summon a truly amazing late-season turnaround, they will be doing so, at least temporarily, without the late-inning services of reliever Robert Gsellman. As a report from Newsday’s Tim Healey intimates, Gsellman has been moved to the 10-day injured list with a tight right triceps. The 10-day IL stint is retroactive to Wednesday, so Gsellman will be eligible to return next weekend when the Mets host the Braves.

As has been noted here and in most other corners of the internet, New York’s bullpen has been entirely unreliable this year, with a 5.22 collective ERA that ranks third-worst in the majors. Gsellman hasn’t exactly helped matters with consistency, as his 4.66 ERA and 4.13 FIP through 63.2 innings would indicate. The righty had been on a good run of late though, with a 2.97 ERA in his last seven appearances dating back to July 26th.

In the immediate term, the Mets will recall Walker Lockett to take Gsellman’s space on the active roster. This is Lockett’s fourth recall of the 2019 season. Dating back to last year’s debut with the Padres, Lockett has a 8.63 ERA in 32.1 innings at the game’s highest level.

The Mets will call up righty Walker Lockett to take the ball in tomorrow’s contest, according to Mike Puma of the New York Post (via Twitter). The corresponding roster move isn’t yet known.

Lockett, 25, was passed around over the offseason after making his MLB debut in 2018 with the Padres. He was first dealt to the Indians and then on to the Mets in the swap that shipped catcher Kevin Plawecki to Cleveland.

Slowed by injury to open the year, Lockett has now spun 24 2/3 frames of 3.28 ERA ball for the Mets’ top affiliate, handing out only four walks but also recording a mere nine strikeouts. When he toes the rubber tomorrow evening at Wrigley, he’ll be looking to improve upon his initial showing last year in San Diego. Over 15 innings, Lockett coughed up 16 earned runs on 22 hits with a 12:10 K/BB ratio. 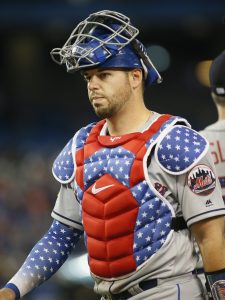