3:03PM: The Royals have officially announced the signing.

1:06PM: The Royals have agreed to a two-year deal with free agent first baseman Carlos Santana, MLB Network’s Jon Heyman reports (via Twitter).  The contract is worth $17.5MM in guaranteed money, according to ESPN’s Jeff Passan (Twitter link), with another $1MM available in incentives.  The majority of the money will come in 2022, as the New York Post’s Joel Sherman reports that Santana will earn $7MM in 2021 and then $10.5MM in the second year of the deal.  Santana is represented by Octagon’s Ulises Cabrera and Brian Mejia.

The $17.5MM matches what Santana would have earned in 2021 had the Indians exercised their club option on his services.  Instead, Cleveland declined the option and bought Santana out for $500K, sending him into free agency. 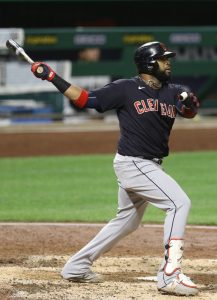 This is the Royals’ second notable two-year free agent contract in as many weeks, following their two-year pact with Mike Minor worth $19MM in guaranteed money.  Kansas City had over $23.5MM coming off their books in the form of expired contracts for Ian Kennedy and Alex Gordon and Maikel Franco being non-tendered, and now just about all of that money has been reinvested in the form of Santana, Minor, and Michael A. Taylor.

As a smaller-market team facing a bigger financial hit than most clubs in 2020 given the lack of revenue-sharing funds, this type of aggressive spending from the Royals is a little surprising, yet it signals that owner John Sherman (who bought the team last offseason) is willing to green-light some significant roster upgrades.  GM Dayton Moore openly said that he plans to field a competitive team in 2021, and while the Twins, White Sox and (even likely without Francisco Lindor) Indians still loom as powers in the AL Central, the organization clearly feels it is possible to contend.

Kansas City is very familiar with Santana over his years in Cleveland, and Santana has more career home runs (31) and RBI (93) against the Royals than any other opponent over his 11 Major League seasons.  2020, however, was a down year for veteran, as he hit .199/.349/.350 over 255 plate appearances for the Tribe — the lowest numbers Santana has ever posted in all three slash-line categories.  While he still led the American League with 47 walks, Santana’s power numbers dropped significantly, and he posted his lowest hard-hit ball and barrel percentage (as per Statcast) of the last six seasons.

It isn’t what you want to see out of a player entering his age-35 season, making it somewhat surprising that Santana was able to land such a healthy two-year guarantee in free agency.  (MLBTR projected Santana for a one-year, $6MM deal.)  Still, Santana had only a .212 BABIP last season and his .360 xwOBA far outpaced his .311 wOBA, so some misfortune was baked into his lackluster results.  Combine this lack of batted-ball luck with the small sample size of the shortened 2020 season, and there’s certainly reason to imagine Santana could look like his old self next year.  It was just in 2019 that Santana hit .281/.397/.515 with 34 homers for Cleveland, earning the first All-Star and Silver Slugger nods of his long career.

Santana played all 60 games at first base last season, with somewhat mixed reviews (+5 Defensive Runs Saved, but -2.0 UZR./150 and -2 Outs Above Average) depending on the metric.  Still, Santana has long been at least an average defender at first base, so he is likely to get the bulk of playing time at the position in 2021, with likely a fair number of DH days included to keep him fresh.

With Santana at first base and Franco gone, it now looks at if Hunter Dozier will slide back across the diamond to play third base.  Dozier didn’t exactly shine defensively in his previous stints at third base, so there is some possible room for flexibility within the Royals’ lineups.  Speculatively, Dozier could see some time in the outfield and Whit Merrifield could get some time at the hot corner, though Merrifield hasn’t played third base since 2017.  If Bobby Witt Jr. is called up at some point in 2021, K.C. could also deploy the star prospect at third base.