The Cubs have activated Jason Heyward from the IL, per a team announcement. In a corresponding move, Greg Deichmann has been optioned to Triple-A. This is the inverse of the roster move from 10 days ago, when Deichmann was called up as Heyward went onto the IL.

Heyward is now one of the few household names remaining after the Cubs’ deadline fire sale. Along with Kyle Hendricks and David Bote, he’s one of just three players on the team with a guaranteed contract for next season. He’ll make $22MM in 2022 and 2023 as he finishes out the eight-year contract he signed prior to the 2016 season. After an excellent 2020 campaign, he’s crashed back to earth this year, with a slash line of .198/.271/.322, a wRC+ of 63.

The Cubs have placed outfielder Jason Heyward on the 10-day IL due to a left hand injury and recalled outfield prospect Greg Deichmann for his Major League debut, per a club announcement.

Deichmann, 26, only recently joined the organization when he was traded over from the A’s in the deal that send lefty Andrew Chafin to Oakland. He’s had a slow start in seven Triple-A games with the Cubs, but his overall body of work this season has been quite strong; in 285 plate appearances, Deichmann is batting .291/.425/.439 with four homers, 16 doubles, three triples and eight steals (in ten tries). He’s walked at a gaudy 18.9 percent clip that’s more than double the current MLB average and punched out at a 22.8 percent rate that would sit below today’s MLB average.

That keen eye at the plate is one of Deichmann’s calling cards and one of the reasons he’s been a fairly well regarded prospect in the A’s system despite not yet tapping into his considerable raw power. Deichmann has drawn a free pass in 13.2 percent of his career minor league plate appearances since being selected out of Louisiana State University by the A’s in the second round of the 2017 draft.

While Deichmann has never topped 11 home runs in a minor league season, he did swat nine long balls in just 95 plate appearances in the 2019 Arizona Fall League. He ranks as the Cubs’ 20th prospect at MLB.com and at FanGraphs, where Eric Longenhagen puts a hefty 70 grade (on the 20-80 scale) on his raw power. Deichmann has been used exclusively in right field this year, though he saw very brief spells at first base and in center earlier in his career. He’s not a burner on the bases or in the outfield, but scouting reports peg him for an average or slightly better arm.

Moving forward, Deichmann has the makings of a left-handed-hitting corner outfielder with some pop and strong OBP skills, though given his sub-.600 OPS against lefties over the past three minor league seasons, he may benefit from a platoon partner. The Cubs can certainly afford to give him consistent at-bats for the rest of the season, particularly with Heyward on the injured list. At the moment, Deichmann joins Ian Happ and Rafael Ortega in a largely overhauled Cubs outfield scene.

There’s no indication as to how long Heyward is expected to miss, but there ought to be room for a two-month Deichmann audition even if it’s a minimal absence for the soon-to-be 32-year-old Heyward. In 284 plate appearances this season, he’s batted just .198/.271/.322. The Cubs still owe Heyward a $22MM salary in both 2022 and 2023.

The A’s have made their first upgrade of deadline season, acquiring veteran left-handed reliever Andrew Chafin from the Cubs in exchange for minor league outfielder Greg Deichmann and minor league right-hander Daniel Palencia, per a club announcement. 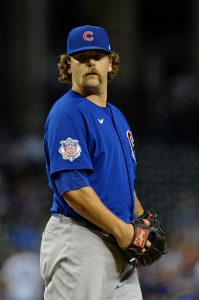 Chafin, 31, inked a one-year, $2.75MM deal over the winter. It contains a $5.25MM mutual option for the 2022 season ($500K buyout), though it’s exceedingly rare for both parties to pick up their side of a mutual option. Generally speaking, if the team exercises their end of a mutual option, it’s because the player has performed well enough to make that price a bargain, which prompts the player to decline and return to free agency. If the player picks up his half, it’s usually due to poor performance or injury, and the team will subsequently decline its half. More often than not, mutual options are simple accounting measures. The A’s likely view him as a rental reliever for the remainder of the season, though the option technically creates the chance that he’ll return.

The Cubs have consistently taken a frugal approach to their offseason bullpen construction in recent years, but Chafin is one of their better low-cost signings. The longtime D-backs lefty has a 2.06 ERA with a 24.7 percent strikeout rate, an eight percent walk rate and a 50 percent ground-ball rate in 39 1/3 innings. It’s the best season of what has quietly been a solid career for Chafin, who carries a 3.14 ERA and strong 24.9 percent strikeout rate through 314 innings at the big league level.

Oakland relievers rank tenth in the Majors with a collective 3.78 ERA and 12th with a 4.16 FIP, and adding Chafin will only further strengthen an already solid group. There’s value beyond simply adding another effective arm, though. Jake Diekman has been the only consistent left-handed presence in manager Bob Melvin’s bullpen, so adding Chafin to the bunch will give the A’s an easier time matching up late in games. Athletics relievers also have the second-lowest combined strikeout percentage of any bullpen in MLB (20.6 percent), and Chafin will give them a solid boost in that department.

From a payroll standpoint, the A’s are only on the hook for about $835K of Chafin’s remaining base salary, although there are other factors to consider. The mutual option comes with a $500K buyout, and Chafin’s deal also comes with $500K worth of incentives that are fairly easy to unlock. He can earn a quartet of $125K bonuses based on games pitched, beginning with his 50th appearance of the season. Chafin, who has pitched in 43 games already, would then earn an additional $125K for each of his 55th, 60th and 65th appearances of the year.

Deichmann is a solid get in a deal for a rental reliever, as he’s a largely MLB-ready prospect enjoying a strong 2021 season in Triple-A. The 2017 second-rounder ranks ninth among Oakland farmhands at FanGraphs and at MLB.com, and he’s currently batting .300/.432/.449 (127 wRC+) in 257 plate appearances with Las Vegas.

There have been concerns about his bat-to-ball skills in the past — understandably so after he whiffed at a 34.1 percent clip in Class-A Advanced in 2018 — but Deichmann’s 23 percent punchout rate so far in Triple-A is the lowest of his career. Those strikeouts are also part of the expected package for a player with this type of pop; FanGraphs’ Eric Longenhagen pegs Deichmann’s raw power at a 70 (on the 20-80 scale), but he’s yet to unlock that prodigious power in games. Deichmann’s career-high in home runs is 11, and he’s connected on four so far in 2021. It’s worth noting that he’s had some injuries that might’ve impacted that, including a broken hamate bone and a shoulder injury sustained on a diving catch (link via MLB.com’s Jim Callis).

Palencia, 21, signed as an amateur free agent out of Venezuela in 2020 and has only recently made his professional debut. He’s tossed 14 1/3 innings for the Athletics’ Low-A affiliate in Stockton, yielding 11 runs on 17 hits, six walks and three hit batters with 14 strikeouts. FanGraphs pegs him 12th in the Oakland system, noting that his plus fastball and above-average breaking ball impressed in a short look this spring before he was sent out of camp. Obviously, with last year’s scratched minor league season and the fact that Palencia only signed in early 2020, scouts haven’t gotten long looks at him, though the Cubs clearly saw enough to pique their interest despite some rough surface-level numbers in Stockton.

MLB.com’s Mark Feinsand had first indicated that the Cubs were closing in on a trade involving Chafin (Twitter link). Ken Rosenthal of The Athletic reported the A’s were the second team and that Deichmann was going back to Chicago (Twitter links). The Chicago Tribune’s Meghan Montemurro first reported Palencia’s inclusion.