The latest minor moves from around the league:

Each of Romero, Charles and Deichmann was in Oakland’s 60-man player pool for the truncated 2020 regular season, but none of the three made his big league debut this year. Both Deichmann (No. 13) and Romero (No. 25) currently rank among the Athletics’ Top 30 prospects at MLB.com.

Deichmann was a second-round pick out of LSU in 2017 and has struggled at the plate in the minors due to wrist injuries, but he erupted with nine homers, two doubles and a triple in just 95 Arizona Fall League plate appearances in 2019. Romero, 26, averaged 10 K/9 and kept his ERA south of 4.00 in an outrageously hitter-friendly Triple-A setting in 2019 — a far more difficult task than one might expect at first glance. Just 28 of the 143 Triple-A pitchers with at least 70 innings managed a sub-4.00 mark thanks to the introduction of what was widely believed to be a juiced ball in an already hitter-friendly setting.

Among the non-roster invitees, Kozma jumps out at the most recognizable name. The former Cardinals shortstop has long been touted as a defensive wizard but has never been able to provide much in the way of offense to accompany his proficiency with the leather. DuRapau’s agents announced his signing last week, as we previously covered. The 34-year-old Schlitter is a well-traveled journeyman who logged 9 2/3 frames with the A’s in ’19. Supak was once a well-regarded prospect with both the Brewers and Pirates but will look for a fresh start with the Oakland org. Schwindel, a right-handed-hitting first baseman, got a very small cup of coffee with the 2019 Royals.

The Athletics have designated righty Brian Schlitter for assignment, per a club announcement. His roster spot goes to the just-acquired Jake Diekman.

Additionally, the Oakland org announced that right-hander Jharel Cotton has been activated from the 60-day injured list. He was optioned down to Triple-A.

Schlitter, 33, has seen sporadic MLB action since his 2010 debut, appearing in parts of four seasons. This year, with Oakland, he allowed four runs on a dozen hits with six walks and four strikeouts in 9 2/3 innings of work. Schlitter has spent most of the season at Triple-A, where he carries a 3.89 ERA in 34 2/3 frames with 7.0 K/9 and 1.3 BB/9.

The Athletics have selected the contract of right-hander Brian Schlitter from Triple-A Las Vegas, the team announced. He’ll take the 25-man spot of closer Blake Treinen, whom the A’s placed on the injured list Saturday, and give the club a full 40-man roster.

Now 33, Schlitter spent 2018 with the Dodgers’ Triple-A affiliate before he joined the A’s on a minor league deal in the offseason. Despite pitching the first couple months of this season in an environment that’s unkind to hurlers, he managed playable results over 34 2/3 innings before his call-up. Schlitter has posted a 3.89 ERA/4.54 FIP with 7.01 K/9, 1.3 BB/9 and a tremendous 67.9 percent grounder mark in Vegas.

The Mariners announced that they’ve traded right-hander Fernando Rodney to the Cubs in exchange for cash considerations (Twitter link). Lefty Zac Rosscup has been optioned to Triple-A, while righty Brian Schlitter has been designated for assignment, according to an announcement from the Cubs, which states that either a player to be named later or cash will head to Seattle in the deal. 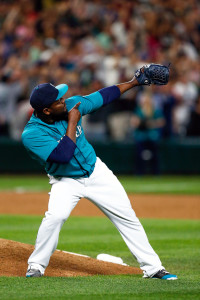 His 2015 struggles notwithstanding, Rodney enjoyed a late career resurgence from 2012-14, posting a 2.21 ERA in 207 2/3 innings. The Cubs will hope they can bring out some of that form to help what has been an up and down season for the team’s relief corps. The team is currently without Jason Motte, Neil Ramirez and Rafael Soriano, each of whom is on the disabled list, so Rodney will provide manager Joe Maddon with another veteran relief arm. Maddon, for that matter, is quite familiar with Rodney, having managed him in 2012-13 when Rodney posted a record-setting 0.60 ERA in 74 2/3 innings. While Rodney’s velocity isn’t as strong as the 96.3 mph he averaged over the course of those two seasons, he’s still averaged a very healthy 94.8 mph on his heater this season. Because he’s been acquired prior to Sept. 1, Rodney will be eligible for the Cubs’ postseason roster.