Presented below is the list of players who have qualified for Super Two status for arbitration purposes this year. (Service time in parentheses.) As MLBTR’s Tim Dierkes recently tweeted, the service time cutoff is 2.130. You can find arbitration salary projections for these players right here.

Click here to read more about how the Super Two concept works. Note that, as the link shows, the originally projected service time cutoff moved down as things played out over the course of the season. That brought some notable names into early arbitration qualification — namely, Calhoun and Rendon — which could have a big impact on their earning power in potential extension scenarios.

It’s also important to bear in mind that several of the players listed above have already agreed to long-term extensions: Gyorko, Lagares, and Archer. Notably, the size of the guarantee provided by Archer’s contract is dependent upon his Super Two status. By reaching it (as had been expected), he keeps a $25.5MM overall guarantee. That total would have been reduced to $20MM otherwise.

That contract structure reflects the importance of reaching Super Two status. Doing so not only bumps a player’s salary a year early, but sets a higher floor for future paydays.

The Cubs’ pitching staff is having trouble this month, and it’s unclear where help will come from, Jesse Rogers of ESPN Chicago writes. It isn’t the best time of the year to make trades. While the Phillies likely don’t feel they have to wait until the trade deadline to make a Cole Hamels deal, such a trade might be easier for the Cubs to strike after some time to make sure they’re contenders. And finding relief help in the trade market will likely be more straightfoward later in the summer. Rafael Soriano is available via free agency, but the Cubs aren’t likely to sign him unless they’re more impressed with him than other teams have been. Here’s more from around the big leagues.

Newly-inked Dodgers righty Freddy Garcia is now a client of the Praver/Shapiro agency, MLBTR has learned. It was reported last night that the long-time big leaguer was coming back from Taiwan to join the Los Angeles organization. As Dylan Hernandez of the Los Angeles Times explains things (on Twitter), injuries to Erik Bedard and Chad Gaudin opened up a need for innings and depth in the upper minors.

Here’s more from out west:

Some might be worried about James Shields’ mileage catching up to him but Padres GM A.J. Preller doesn’t agree with that assessment, Jerry Crasnick of ESPN.com writes.

“You say, ’OK, eight years with 200 innings pitched,’ and you can look at it both ways,” said Preller. “We debated it when we were talking about James, and obviously we’re betting that there are quite a few more years of that left…When you study it, there’s nothing definitive that says, ’Once you turn 33 and have a certain amount of innings, that’s the end of the day.’ You look up and see guys — whether it’s Tim Hudson or Mark Buehrle or a lot of guys — and they’re still doing it. We think with James’ makeup and athleticism, he’s going to be a guy who’ll take the ball for us the next four years in San Diego.”

Here’s more from the NL West..

The Dodgers and Marlins have announced a blockbuster deal that sends middle infielder Dee Gordon, veteran right-hander Dan Haren, infielder Miguel Rojas and a player to be named later or cash to Miami in exchange for left-hander Andrew Heaney, second baseman Enrique Hernandez, righty reliever Chris Hatcher and catching prospect Austin Barnes.  (Heaney has since been traded to the Angels for Howie Kendrick.) 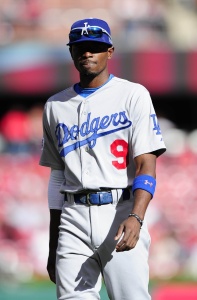 With the Dodgers reportedly open to dealing Gordon and the Marlins open to trading from their surplus of young arms, the two made sense as trade partners, especially with Miami rather thin in the middle infield.  Gordon is an upgrade over the Marlins’ current second base options (Donovan Solano and Derek Dietrich), though Gordon could also return to his original shortstop position and supplant Adeiny Hechavarria, who has been a negative fWAR player over the last two seasons.

Gordon broke out with an All-Star campaign in 2014, hitting .289/.326/.378 over 650 plate appearances while leading the league in both steals (64) and triples (12).  He is controlled through the 2018 season, though he’ll start getting expensive this winter as he is arbitration-eligible for the first of four times (as a Super Two player).  MLBTR’s Matt Swartz projects Gordon to earn $2.5MM in 2015.

Haren said last month that he could retire if he was pitching anywhere other than with the Dodgers or Angels.  The righty exercised his $10MM player option for the 2015 season, so now the question seems to be whether Haren will have a change of heart about playing outside of southern California, or if he’ll indeed hang up his glove and walk away from that $10MM.  Haren posted a 4.02 ERA, 7.0 K/9 and a 4.03 K/BB rate over 186 innings last season, so he’d fit the Marlins’ desire for a veteran arm if he did continue to pitch.  ESPN’s Buster Olney did hear that a third team could be involved in the trade talks, which could be a precursor to another Marlins trade that could send Haren to a more preferred destination. The Marlins’ Michael Hill says (via the Los Angeles Times’ Bill Shaikin on Twitter) that the Marlins will not receive additional compensation depending on what happens with Haren.

Whether or not Haren retires, the Dodgers will still send $10MM to Miami as part of the trade, Clark Spencer of the Miami Herald reports (Twitter links).  L.A. will also cover the projected $2.5MM that Gordon will earn in arbitration.  The Marlins plan to use the money from the Dodgers on a first baseman or a starting pitcher.

Rojas, 25, made his Major League debut in 2014, posting a .464 OPS over 162 PA and mostly playing shortstop.  Rojas also received some significant playing time at second and third during his nine-year minor league career, which saw him post a .238/.305/.297 line over 2639 plate appearances in the Dodgers, Reds and Rays farm systems.

From the Dodgers’ perspective, they’ve overhauled their middle infield in a matter of hours between this deal, the Kendrick swap and the seemingly impending Jimmy Rollins trade. Heaney is already gone, but USA Bob Nightengale points out that L.A. could also use some of these youngsters as trade bait to acquire a top starter such as Cole Hamels.  It’s also possible that some of these players could be going to the Phils to complete the Rollins deal, as per Matt Gelb of the Philadelphia Inquirer.

This is Hernandez’s second trade in less than five months, as he came to the Marlins from the Astros in July as part of the Jarred Cosart deal.  Hernandez also made his MLB debut in 2014, posting a .248/.321/.421 slash line and a 110 wRC+ over 134 PA with Houston and Miami.  He played mostly as a second baseman in the minors and will join Alex Guerrero, Darwin Barney and Justin Turner in battling for a backup role in Los Angeles.  Hernandez also has experience at third, short and all three outfield positions, so he could be a valuable bench piece.

Hatcher enjoyed a breakout season in 2014, posting a 3.38 ERA, 9.6 K/9 and a 5:1 strikeout-to-walk rate over 56 innings last season.  He’s a solid addition to a Dodgers bullpen that was looking to upgrade at a low cost, given the large salaries already committed to the likes of Brandon League, Brian Wilson and J.P. Howell, not to mention Kenley Jansen’s projected $8.2MM arbitration salary.

Andy Martino of the New York Daily News reported the deal had been agreed upon, pending some paperwork.  ESPN’s Buster Olney (Twitter links) was the first to report that the two sides were having “serious talks” about a Gordon/Heaney trade and Haren’s possible involvement, and Olney described the deal as being “close to done.”  Clark Spencer of the Miami Herald (Twitter link) added that Hernandez, Barnes and Hatcher were included in the deal. MLB.com’s Joe Frisaro tweeted that Rojas was involved.