The Twins have signed veteran infielder Daniel Descalso to a minor league contract, their Triple-A affiliate in St. Paul announced.

This is the first we’ve heard about Descalso since the Cubs declined their $3.5MM option for 2021 in favor of a $1MM buyout after last season. It was an easy decision for the Cubs, who signed Descalso to a two-year, $5MM guarantee entering 2019. That deal couldn’t have worked out much worse for Chicago, as Descalso struggled to a .173/.271/.250 line with two home runs in 194 plate appearances in 2019 and then missed all of last season as a result of a left ankle injury.

The 34-year-old Descalso has typically been a below-average hitter during his career, as evidenced by the .235/.320/.362 line he has posted in a combined 2,893 plate appearances with the Cubs, Cardinals, Rockies and Diamondbacks. But he has played all over the infield throughout his career, and he did slash a career-best .238/.353/.436 with 13 home runs in 423 PA with the D-backs in 2018, so perhaps he’ll prove to be a useful addition for the Twins.

The Cubs have declined their $3.5MM club option on infielder Daniel Descalso for the 2021 season, the team announced.  Descalso will instead receive a $1MM buyout and head into free agency.

Descalso was inked to a two-year, $5MM contract in December 2018 with the expectation that he would provide Chicago with multi-positional depth and some of the left-handed hitting pop he displayed with the Diamondbacks during the 2018 season.  Unfortunately for the Cubs, Descalso hit only .173/.271/.250 over 194 plate appearances in 2019 and missed all of 2020 recovering due to an ankle injury.

A veteran of 10 big league seasons, the 34-year-old Descalso will surely have to settle for a minor league contract if he catches on with another team this winter.  A career .235/.320/.362 hitter over 2893 career PA with the Cubs, D’Backs, Rockies, and Cardinals, Descalso has played mostly second base and third base in recent years, with some other experience as a first baseman, shortstop, and left fielder on his resume.

The Cubs have settled upon their roster to open the 2020 campaign. Catcher Josh Phegley and reliever Rex Brothers both made the cut, so they’ll be added to the 40-man roster.

To clear room, the Cubs announced several 40-man departures. Utilitymen Robel Garcia and Daniel Descalso are both off of the list; the former was designated for assignment and the latter was placed on the 45-day injured list. Also moving off of the MLB roster was outfielder Mark Zagunis, who opted out of the 2020 season.

Rays left-hander Blake Snell, the recipient of a cortisone shot in his elbow last week, threw 20 fastballs on flat ground Tuesday and came out of it “fine,” according to manager Kevin Cash (via Marc Topkin of the Tampa Bay Times). Snell’s slated to continue working back this week, but even if things go well, it does seem the former Cy Young winner will miss at least the opening week of the regular season, Topkin suggests. Snell’s elbow issues date back to last season, as he underwent an arthroscopic procedure in late July that shelved him for almost two months.

The Cubs started seven different players at second base in 2019 with generally uninspiring results. Addison Russell, Ben Zobrist and Tony Kemp are now gone. Let’s take a look at the options who remain to fill that spot on the north side in 2020.

Also in camp as non-roster invitees are Corban Joseph, Carlos Asuaje and Hernán Pérez. Joseph has intrigued teams recently with quality minor-league numbers, but he’s a 31-year-old with 94 MLB plate appearances to his name. Asuaje, meanwhile, is coming off a disappointing tenure in the KBO, while Pérez has hovered around replacement-level over parts of eight seasons as a utility option. Each would seem to need an eye-opening spring to earn the job. Ditto prospect Trent Giambrone, who is also in camp but was left unprotected for (and went undrafted in) the Rule V draft.

Ian Happ could have added another name to the mix. However, the coaching staff considers Happ more of an option in center field, Mooney reports. Thus, it seems likeliest one of the names above picks up the slack at the keystone in 2020.

3:36pm: Strop’s injury will cost him more than the 10-day minimum, it seems. The right-hander told reporters that an MRI performed earlier today revealed a Grade 2 strain (Twitter link via Gordon Wittenmyer of the Chicago Sun-Times). Strop says that there’s no timeline for his return at this point. For now, he’ll take three to four days to rest the hamstring before he begins working back.

3:20pm: Russell is in tonight’s lineup, playing second base and batting eighth, the team announced. Zobrist has been placed on the restricted list after being granted a leave of absence to deal with a personal matter, per the club.

Chicago also announced that right-hander Pedro Strop has been placed on the 10-day injured list due to a hamstring strain, with lefty Mike Montgomery coming off the injured list in his place.

2:34pm: The Cubs have decided to activate shortstop Addison Russell for tonight’s game, according to David Kaplan of NBC Sports Chicago (Twitter links). He will see his first game action since last September.

It seems that the timing of the decision was driven by the potential unavailability of Ben Zobrist and Daniel Descalso. The former missed yesterday’s game with an undisclosed personal matter while the latter has been nursing an ankle injury.

Russell recently finished a 40-game suspension issued under the MLB-MLBPA Joint Domestic Violence, Sexual Assault and Child Abuse Policy. His former wife has alleged a variety of abusive actions during their marriage.

The Cubs initially optioned Russell to Triple-A, though his stay proved short. A lifetime .242/.313/.392 hitter through nearly two thousand MLB plate appearances, he carries a .222/.357/.467 batting line in 56 PA this year at the highest level of the minors.

Russell is five days away from passing into the 4+ MLB service class. Assuming he stays up, he’ll be eligible for arbitration twice more before qualifying for free agency.

The National League’s Central division projects to be a closely fought contest, making it all the more important for each team to have all of its players available and in top form. Here are the latest notes on a few health situations from the division:

2:02pm: The signing has now been announced. Descalso will earn salaries of $1.5MM and $2.5MM, per MLB.com’s Jordan Bastian (via Twitter).

10:42am: The Cubs have agreed to terms with veteran utilityman Daniel Descalso, according to reports from Ken Rosenthal of The Athletic (Twitter link) and Jon Heyman of Fancred (via Twitter). Descalso, a client of Pro Edge Sports, will be promised $5MM over two seasons, per Rosenthal (Twitter links). There’s a club option as well for the 2021 season, with a $3.5MM price tag and $1MM buyout. 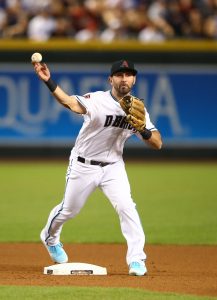 This move, if completed, promises to deliver the Cubbies some of the veteran grit they felt they were missing in a 2018 season in which they came up a bit short of their own lofty expectations. It would also bring Descalso back to the NL Central division after a four-year foray into the NL West.

Descalso will help the Cubs cover for the absence of  Addison Russell over the first month or so of the season, likely seeing quite a bit of action at second while Javy Baez plays short. Once Russell returns to the club from his domestic abuse suspension, as now seems to be the plan, Descalso will in all likelihood step back into the utility role to which he’s best suited.

If that’s all that takes place, the Cubs would feature a variety of versatile position players to work with. Russell and especially Baez would occupy a fair bit of the middle-infield action, with Descalso filling in there and at third base. Presumably, Ben Zobrist and Ian Happ will spend the majority of their time in the outfield, though both have ample experience on the dirt as well. Just where David Bote will fit in all of this isn’t clear, but the Cubs certainly won’t mind having the depth and he’s optionable as well.

Of course, there could yet be further roster tweaks still to come. The Cubs have engaged the market in a surprisingly spartan manner thus far, with the club sending signal after signal that it’s not going to add much payroll. But there could still be trade possibilities to work through and it’s still reasonable to wonder whether the Chicago organization has a big strike still in it if the right opportunity arises.

Descalso, of course, spent the early portion of his career with the bitter-rival Cardinals. He earned his playing time as a gritty, pesky, versatile player who did enough in the field and on the bases to overlook his generally subpar bat.

In recent years, though, the 32-year-old Descalso has opened up some new aspects to his game. Beyond getting acquainted in the corner outfield, he has become an increasingly aggressive flyball hitter. The initial returns have been impressive, as Descalso has turned into a lite version of a three-true-outcomes hitter.

Descalso hasn’t played much shortstop in recent seasons, though that is in part no doubt a reflection of the needs of his former teams. It’s also not a primary concern for the Cubs, who can utilize Baez and Russell at the position.

The Cubs are “in strong pursuit” of Daniel Descalso, according to Ken Rosenthal of The Athletic (Twitter link). They’ll have interesting company in the bidding, though, as the division-rival Cardinals are also involved on their former infielder, as previously rumored and as Bob Nightengale of USA Today Sports tweets.

Descalso, 32, was a mainstay with the Cards for several years, but has spent the past four seasons out west with the Rockies and D-Backs. In that time, the veteran has not only spread his wings a bit defensively but heated up a bit with his left-handed bat.

Known primarily as a utility infielder, Descalso has now spent a fair amount of time in the corner outfield. It’s likely that these and other clubs will mostly value him for his ability to field any position on the dirt, but it surely doesn’t hurt that he’s now familiar with left field.

At the plate, Descalso has earned a rather expansive role in Arizona by producing sturdy on-base numbers. He’s still a clearly below-average hitter over the course of his career, but Descalso has also perhaps shown some newfound abilities at the plate as an acolyte of the flyball revolution.

Last year, Descalso popped a career-high 13 long balls and turned in a healthy .198 ISO — well north of anything he had shown previously. An aggressive new approach also resulted in quite a few more strikeouts (26.0%) than usual, but Descalso more than made up for that by setting new career marks (by a wide margin) with a 15.1% walk rate and 43.1% hard-contact rate. The results — a .238/.353/.436 slash — were impressive.

Given those changes, and Descalso’s preexisting reputation as a reliable veteran and generally solid defender, it’s not hard to see why these two contending clubs have interest. Presumably, others do as well, though the infield market is still quite overloaded with possibilities.

A busy day of pitching transactions included Tanner Roark being traded from the Nationals to the Reds, and free agent Lance Lynn nearing an apparent agreement with the Rangers.  Those moves take two potential Giants targets off the board, as Alex Pavlovic of NBC Sports Bay Area reported that San Francisco had interest in its own Roark deal, while The Athletic’s Andrew Baggarly noted that the Giants had interest in Lynn before his reported price tag (three years and $30MM from Texas) rose too high for their liking.  The Giants are known to be exploring reinforcements for a rotation that has still has Madison Bumgarner as the ace, but a lot of inexperience and question marks in the rest of the starting five.

Some more from around the NL West…