The Cardinals made a monumental move this week when they acquired superstar first baseman Paul Goldschmidt from the Diamondbacks, but the Redbirds certainly aren’t done yet. Currently mired in their first three-year playoff drought since the late 1990s, the Cardinals are emphasizing the need for immediate improvement, president of baseball operations John Mozeliak revealed after the Goldschmidt trade (via Derrick Goold of the St. Louis Post-Dispatch).

With the Winter Meetings on the verge of beginning, Goold has the latest on where the 2019-minded Cards could attempt to upgrade next:

Left-hander Patrick Corbin is set for a lucrative trip to free agency in the offseason, having just wrapped up a campaign in which he was somewhat quietly one of the majors’ premier pitchers. Corbin, who reached 200 innings for the first time in his career, ranks third among starters in FIP (2.47), fourth in fWAR (6.3), sixth in K/9 (11.07) and K/BB ratio (5.13), and 14th in ERA (3.15). Those numbers may help price Corbin out of Arizona, and based on his comments Friday, the 29-year-old “seems to believe his time with the Diamondbacks likely is over,” Nick Piecoro of the Arizona Republic writes “I think when the season is over, I’ll look into it more,” Corbin said. “I think I’ll just look back on my time here. The seven years have gone by really quick. A lot of friendships that I’ve had here. I’m not sure what’s going to happen. But the Diamondbacks organization will always have a special part of my heart.”

The Diamondbacks have picked up their club option over utilityman Daniel Descalso, per a club announcement. He’ll earn $2MM for the 2018 season.

Arizona could have parted ways with the veteran while paying a $150K buyout. But the 31-year-old established himself as a steady member of the NL Wild Card-winning club and will again represent an affordable and versatile roster asset.

Descalso was asked to do more than likely was anticipated when he joined the Snakes last winter, moving over from the division-rival Rockies. He ended up seeing action in 131 games, posting a .233/.332/.395 slash with ten home runs over 398 plate appearances.

For the past two seasons, Descalso has drawn walks in about a dozen out of every hundred plate appearances, though he has never ended a MLB season with even an average level of offensive production. Most of all, though, Descalso is valued for his ability to line up all over the diamond, including

Happy birthday to Ichiro Suzuki, as the future Hall-of-Famer turns 44 years old today.  Clark Spencer of the Miami Herald takes a look at Ichiro’s offseason training regimen, though “offseason” may not be the correct term since the outfielder has continued to work out at Marlins Park almost every day since the season ended.  Near-daily training has been a staple of almost every offseason for Suzuki — he took a month off in 2005 but tells Spencer via an interpreter that “my body just didn’t feel like my own body. My body was, like, sick.”  Ichiro has long been known for his incredible fitness regime, and he doesn’t appear to be stopping anytime soon, as he has said that he hopes to keep playing into his 50s.

Here’s the latest from around baseball…

Here’s the latest from around the NL West…

The D-backs announced that they’ve signed infielder Daniel Descalso to a one-year deal and designated fellow infielder Phil Gosselin for assignment in order to clear a spot on the 40-man roster. FOX’s Ken Rosenthal tweets that Descalso will be guaranteed $1.5MM in his new deal — a $1.35MM salary for the 2017 season plus a $150K buyout on a $2MM club option for the 2018 season. 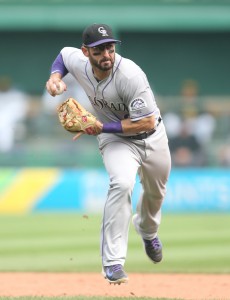 Descalso will give the D-backs a left-handed bat to help balance out a predominantly right-handed roster, and he’ll also provide manager Torey Lovullo with some defensive versatility on the infield. While Descalso doesn’t grade out as a plus defender at any of the four infield spots, he does have more than 1000 innings at second base, third base and shortstop as well as 170 innings at first base in his career.

As for Gosselin, the 28-year-old has spent the past season and a half in Arizona, hitting a combined .283/.338/.409 316 plate appearances. While Gosselin’s bat has been better than that of Descalso over the course of their respective careers, he’s primarily a second baseman with more limited experience at third base and at shortstop.

Rockies infielder Daniel Descalso has a “very small” fracture to his left hand, manager Walt Weiss told reporters, including Patrick Saunders of the Denver Post (Twitter links). He is expected to miss “several weeks” with the injury, Weiss added, as will southpaw Tyler Anderson, who is dealing with an oblique issue but wasn’t expected to challenge for a roster spot.

Descalso was penciled in as the club’s utility infielder, but he’ll now certainly be on the shelf for Opening Day and some stretch beyond. That may help open things up for some younger options. Colorado was already deciding between Christhian Adames and Trevor Story to fill in for Jose Reyes at shortstop, and both now look like good bets to crack the majors (so long as Colorado is willing to put Story on track for Super Two status).

The Rockies will be hopeful of a bounceback from Descalso when he returns. Never much of a threat at the plate, he fell to a paltry .205/.283/.324 batting line in 209 plate appearances last year despite the benefits of hitting at Coors Field. That line was good only for a 43 wRC+. Descalso is most valued for his defensive versatility, of course, and continued to show a playable glove at both middle infield positions last season.

Catcher Eli Whiteside has opted to accept a coaching job with the Giants rather than taking one of several offers he had to continue playing, MLB.com’s Chris Haft reports. The veteran played in parts of six MLB seasons, including a three-year run in which he was a significant contributor for San Francisco. He will retire after getting one last short run in the bigs last year with the Cubs.

More from the NL West:

1:17pm: Descalso will receive a $3.6MM guarantee, agent Steve Cantor tells ESPN.com’s Jerry Crasnick (Twitter link). He will earn $1.5MM this year and $2.1MM next, per SB Nation’s Chris Cotillo (via Twitter). Each contract year also includes up to $500K in attainable incentives.

1:07pm: The Rockies have signed utility infielder Daniel Descalso to a two-year deal, the club announced. Descalso, 28, was non-tendered by the Cardinals earlier in the offseason; he had been projected by MLBTR/Matt Swartz to earn $1.4MM.

Though he has spent most of his time at third and second, Descalso has played over 100 games at short as well. And his left-handed bat also increases his versatility for a club like Colorado, which fields three right-handed-hitting infielders at those positions.

On the other hand, defensive metrics have never been in love with his glove, especially at short. And Descalso owns a lifetime .243/.313/.341 slash over parts of five seasons. He has never finished a campaign with an OPS+ of greater than 91 or lower than 72, and he has settled right in the middle of that range in each of the last two years.

Notably, moreover, Descalso has fairly significant reverse platoon splits over his career: a .643 OPS against righties and a .696 mark versus same-handed pitchers. If that is a reflection of his true talent, then he may be less of a fit than might be seemed at first glance.