NOV. 13: Gutierrez will earn a $1.5MM base salary and can collect up to $4.25MM more via bonuses based on plate appearances, according to Bob Dutton of the Tacoma News Tribune (Twitter link). 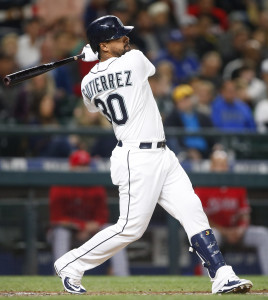 Gutierrez, 32, returned to the Majors in 2015 after missing all of the 2014 season. The oft-injured center fielder signed a four-year, $20MM extension with Seattle prior to the 2010 season but saw that deal turn sour due to a litany of injuries. Over that time, Gutierrez battled a stomach disease (gastritis), a torn pectoral muscle, oblique injuries, a concussion which had long-term lingering effects and a series of hamstring injuries.

Gutierrez, though, made his way back to the Majors midway through the 2015 campaign and delivered unprecedented power numbers, relative to his own standards. The 32-year-old batted .292/.354/.620 with 15 home runs in just 189 plate appearances. While Gutierrez saw far more time against left-handed pitching than he did against right-handers, he posted nearly identical OPS marks of .973 and .978 against lefties and righties, respectively.

Once known as a premier defender in center field, Gutierrez played exclusively corner outfield in 2015 and probably won’t be counted upon for center field defense at this stage of his career, considering his lengthy history of injuries. However, he still graded out quite well in 301 innings of left field duty (+3 Defensive Runs Saved, +3.4 UZR). It’d be unreasonable to expect that Gutierrez can maintain an OPS just shy of 1.000, but he could certainly profile as a capable platoon partner for left fielder Seth Smith, who has historically struggled against left-handed pitching.

The Mariners have made a host of moves involving veteran non-roster invitees, per a team announcement. Seattle has released outfielders Endy Chavez and Franklin Gutierrez along with lefty Joe Saunders, with the latter two players re-signing on new minor league deals.

Chavez, 37, exercised an opt-out clause in his deal to reach the open market. He has spent the last two seasons with the Mariners, combining for 537 plate appearances with a .271/.303/.347 slash.

The 32-year-old Gutierrez, meanwhile, sat out all of 2014 and has seen only five plate appearances in Cactus LeagueÂ action this spring. He has been a productive player at times, though certainly will need to prove his health and productivity if he is to re-establish himself in the big leagues.

Meanwhile, Saunders will figure to provide a depth option for the Mariners’ pitching staff. The lefty has had difficult results in each of the last two seasons, but has a long track record of durability.

The Rays have dramatically improved their farm system since last summer, but they’ve had to do it by trading top talent, Roger Mooney of the Tampa Tribune writes. Steven Souza, who Baseball America deems the system’s best prospect, arrived in the Wil Myers trade, with No. 2 prospect Daniel Robertson joining the system via the Ben Zobrist deal and No. 3 prospect Willy Adames arriving in the David Price trade. The Rays have gotten little talent in the draft lately, so their best young players have come from elsewhere. Souza, Robertson and Adames aren’t the only key prospects in their system they’ve gotten in trades — there’s also Hak-Ju Lee (from the Matt Garza deal), Boog Powell (from the Zobrist trade), Andrew Velazquez and Justin Williams (from the Jeremy Hellickson trade) and Jake Bauers and Burch Smith (from the Myers deal). “It was no secret that our minor league system didn’t have the talent that it has had in past years,” says Rays president of baseball operations Matt Silverman. “A number of players have graduated from our system and are on our major league club or have been part of trades that we made, and that left somewhat of a void that we needed to fill during these transactions.” Here’s more from the American League.

The Astros nearly signed Ryan Vogelsong, but after Vogelsong took his physical with the Astros, he went another direction and re-signed with the Giants. Vogelsong later said he “really wasn’t comfortable with what was going on” with the Astros, as Evan Drellich of the Houston Chronicle notes. Vogelsong’s agent, Dave Meier, later said Vogelsong simply meant he wasn’t comfortable with the fact that negotiations were falling apart. Vogelsong also later added that his wife wanted to stay in San Francisco. As Drellich notes, though, Vogelsong’s phrasing was odd, and it’s unclear exactly why the two parties weren’t able to agree on a deal. “[E]verything that’s happened to me this offseason — and one of these days I’ll tell you guys all about it, when we’re all sitting around having a couple beers 10 years from now when I’m done playing — and you’ll go, ’There’s no way that happened,’ and I’ll say ’Yup,’ and you’ll understand what I’m talking about,” Vogelsong says. Here’s more from the West divisions.

The latest edition of the MLBTR Podcast focuses on the Padres’ busy offseason, as Jeff Todd speaks with MLB.com’s Padres beat writer Corey Brock about all of San Diego’s transactions.  Jeff also spends a few minutes on how the five NL West teams’ winter moves have created a varied set of expectations around the division.  Here’s the latest from around the baseball world…

The Angels have at least a little interest in Red Sox infielder Brock Holt, Gordon Edes of ESPN Boston tweets. After non-tendering Gordon Beckham, the Angels are on the lookout for a backup infielder, and GM Jerry Dipoto has said that a trade for one is a possibility. Holt would be a good get for the Angels — he hit a solid .281/.331/.381 last season while playing seven positions. Here’s more from the American League.

The Mariners have placed outfielder Franklin Gutierrez on the restricted list after he advised the team that he will not play in 2014, reports Bob Dutton of the Tacoma News Tribune (Twitter links). The move clears a 40-man roster spot for Fernando Rodney.

Gutierrez has had a relapse of the gastrointestinal issues that plagued him last year, and says he intends to focus on regaining his health. Soon to turn 31, Gutierrez managed only 141 plate appearances last year, over which he posted a .248/.273/.503 line with ten home runs. He had inked a one-year, $1MM deal with Seattle that included an additional $2MM in incentives.

With an outfield featuring several left-handed bats, Gutierrez had figured to provide an important platoon option from the right side of the plate. His loss could add even greater impetus to Seattle's rumored interest in Nelson Cruz. Of course, the greater issue might be the loss of Gutierrez as an option to share time in center alongside Dustin Ackley or Michael Saunders. While switch-hitter Abraham Almonte had a solid all-around season last year in the upper minors, he is unproven and has generally put up better numbers when hitting from the left side in his recent minor league campaigns. That being said, the list of remaining free agents does not appear to house any obvious solutions.

A look at the AL and NL West..