Infielder Jose Reyes told reporters on Friday that he’d like to finish his career with the Mets, but it doesn’t appear the team will re-sign the impending free agent. Mets officials are “lukewarm” about bringing back the 34-year-old, according to Mike Puma of the New York Post, while Marc Carig of Newsday adds (on Twitter) that he’s unlikely to be in their plans next season. Reyes’ fate with the Mets could ultimately hinge on whether they exercise fellow veteran infielder Asdrubal Cabrera’s $8.5MM option (or buy him out for $2.5MM), writes Puma, who notes that Reyes is immensely popular in their clubhouse. Along with his behind-the-scenes presence, including his close relationship with Amed Rosario, Reyes has recovered from a subpar first half to provide a .288/.355/.468 batting line in 155 post-All-Star break plate appearances to make his case for another Mets contract. He signed his current deal last summer after serving a domestic violence suspension as a member of the Rockies, who released him.

The Dodgers have claimed righty Dylan Floro off waivers from the Cubs, the Los Angeles organization has announced. A 40-man spot was opened by moving Franklin Gutierrez to the 60-day DL.

Still, teams obviously remain interested in Floro’s ability to draw grounders. He has induced worm burners on 61.6% of the balls put in play against him this year at Iowa, where he owns a 3.88 ERA.

Even though he’s facing a six- to nine-month recovery from his torn left ACL, Nationals center fielder Adam Eaton isn’t abandoning hope on playing again this season. “I’m going to work my butt off and give myself the best-case scenario to play,” Eaton told reporters, including Jamal Collier of MLB.com. “This year would be great, and if that is the case, that means we are playing in October, that is for sure.” Cubs left fielder/catcher Kyle Schwarber suffered multiple torn knee ligaments last April but was able to suit up again in late October for the World Series, of course, so it’s not impossible to imagine Eaton returning if the Nats get that far. However, Schwarber got hurt in early April, giving him a three-week head start on Eaton; further, unlike Eaton’s game, Schwarber’s isn’t predicated largely on either speed or defense. It’s also worth noting that Schwarber was not healthy enough to play the field during the Fall Classic, instead serving as a pinch-hitter in Chicago and a designated hitter in Cleveland.

When announcing Eaton’s injury Sunday, Nationals general manager Mike Rizzo mentioned that he’s confident in the team’s in-house center field options. Right fielder Bryce Harper and shortstop Trea Turner, both of whom have center field experience, are not among the possibilities to grab the reins from Eaton, according to manager Dusty Baker. When asked Sunday if he’d consider using either Harper or Turner in center, Baker responded (via Eddie Matz of ESPN.com): “No. Leave my team alone.”

For Washington on Sunday, life without Eaton began with a 23-5 drubbing of the NL East rival Mets. Harper hit a home run and reached base four times, but his performance paled in comparison to Anthony Rendon’s. The third baseman had an afternoon for the ages, going 6 for 6 with three homers and 10 RBI. In the process, Rendon became the 13th player in major league history to knock in double-digit runs in a single game.

Here’s more from the NL:

A pair of struggling teams got the good news that they’ll have key hurlers taking the hill on Sunday. Noah Syndergaard is ready to go after some worry over his biceps, as Anthony DiComo of MLB.com reports on Twitter. Syndergaard is said to have denied a request that he undergo an MRI, saying he feels fully healthy. Also, Aaron Sanchez will return for the Blue Jays, as Ben Nicholson-Smith of Sportsnet.ca tweets.

Yankees pitching prospect James Kaprielian is weighing whether or not to undergo surgery, GM Brian Cashman told reporters including Erik Boland of Newsday (Twitter links). Cashman didn’t make clear just what surgical options might be on the table for the 23-year-old, who is said to have experienced elbow pain recently, but all the hints suggest it could be a significant injury. “The rehab process has not been successful,” said Cashman, “so he’s facing some decisions.” Kaprielian also dealt with elbow problems last year, limiting his ability to gain minor-league experience, but there were still suggestions that the 2015 first-rounder might factor at the MLB level this year.

Here’s more on some health situations from around the game: 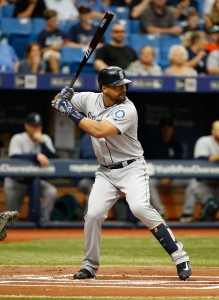 “There’s very little likelihood that both (Valencia and Lee) will fit on the same roster,” Dipoto said. “I (also) don’t think we have to go out and focus on getting a right-handed-hitting outfielder just to have one.”

Valencia expects his role with the Mariners will be “to play first base, probably some right field,” which would make both Lee and Gutierrez superfluous to the club. All three are right-handed hitters, and barring more moves, Valencia is a strong candidate to complement lefty-swingers Dan Vogelbach at first base (previously Lee’s role with now-free agent Adam Lind) and Seth Smith in the outfield (fomerly Gutierrez’s job). Valencia seems likely to see most of his action at first, as Dipoto said Saturday that August acquisition Ben Gamel is slated to start in one outfield corner and Nelson Cruz and Guillermo Heredia will join Valencia in platooning with Smith. However, given that it’s so early in the offseason, Dipoto unsurprisingly isn’t ruling out further acquisitions.

“If we see a good fit, or the ability to go acquire a player who makes us better, we’re not going to hesitate. Valencia’s flexibility allows that,” he commented.

Oakland, having traded an outfielder in Valencia, will now look to strengthen the area, GM David Forst said in the wake of the trade (per Joe Stiglich of CSNBayArea.com).
“We need major league outfielders,” Forst stated. We have to be open to any means of acquiring, whether it’s free agents or trades. It’s certainly not our history to be aggressive at the top end of the free agent market, but we have money to spend and we have some good options. Mark Canha coming back will help fill this gap.”
Canha missed nearly all of 2016 with a hip injury, but he did slash a respectable .254/.315/.426 with 16 home runs and seven steals in a 485-plate appearance 2015 campaign. Oakland also has left fielder Khris Davis, who swatted 42 home runs this year, but the rest of its outfield class is decidedly less impressive. Current options include Brett Eibner, Matt Olson and Jake Smolinski, all of whom are coming off poor seasons. Valencia was far better than those three from an offensive standpoint this past season, though he’s defensively challenged and had clubhouse issues in Oakland. Forst spoke well of Valencia, but he didn’t think the team could pass on a chance to acquire Blackburn.
“He did a nice job in our lineup,” Forst said of Valencia. “This was about an opportunity to get a young starting pitcher we really like.”