“I felt like it wouldn’t be fair to myself, and more importantly to the team that was paying me a lot of money to perform at a high level, if there was a chance my dedication would waver — particularly as the season got longer. I’m honored to have played for as many years as I have, and I feel even luckier to walk away on my own terms instead of having the decision made for me.”

The 35-year-old Willingham (36 in February) was a late bloomer who didn’t become an MLB regular until his age-27 season with the Marlins. However, once he established himself as a presence in their lineup, he quickly became known for his excellent plate discipline and plus right-handed power. He found himself traded to the Nationals and then to the A’s before reaching free agency for the first time, where he ultimately signed a three-year, $21MM contract with the Twins.

Willingham’s best season came in his first year with the Twins, as he batted .260/.366/.524 with a career-high 35 home runs — earning him a Silver Slugger and making him just the third player in Twins franchise history to hit 35 or more homers in a season (along with Hall of Famer Harmon Killebrew and former AL Rookie of the Year Bob Allison). In total, Willingham’s career comes to a close with a .253/.358/.465 batting line, 195 homers and 632 RBIs in 1147 games between the Marlins, Nationals, A’s, Twins and Royals. The “Hammer” earned more than $35MM in his playing career, according to Baseball-Reference.com. MLBTR wishes Willingham and his family luck and happiness in his post-playing days and congratulates him on a very nice career.

Though not available to MLB clubs at present, righty Chihiro Kaneko could become a virtual free agent (in the same manner as Masahiro Tanaka last year) if he is posted by the Orix Buffaloes. The 31-year-old has signed on with agent Arn Tellem of Wasserman, according to a tweet from Liz Mullen of Sports Business Journal.

5:57pm: Willingham says that he has yet to decide whether or not he will play next year, as Berardino tweets.

3:30pm: Right-handed slugger Josh Willingham has decided to retire following the conclusion of the 2014 campaign, according to a report from Mike Berardino of the St. Paul Pioneer Press. According to Berardino, the 35-year-old Willingham has told people close to him that he is “100 percent retiring,” although agent Matt Sosnick tells MLBTR’s Tim Dierkes (Twitter link) that “Josh and [his wife] Ginger haven’t made a definitive decision.”

Willingham has been slowed by a groin injury for much of September, which comes just months after he missed nearly two months with a fractured wrist (suffered when he was hit by a pitch) and a year after he missed a large chunk of the 2013 season with a torn meniscus.

Willingham inked a three-year, $21MM contract with the Twins in the 2011-12 offseason and proceeded to have a career year, mashing 35 homers and posting a very strong .260/.366/.524 batting line in 2012, despite playing in the pitcher-friendly confines of Minneapolis’ Target Field. However, since that time he’s batted .212/.345/.382 as he’s battled those injuries. Minnesota flipped him to the division-rival Royals in exchange for pitching prospect Jason Adam in August.

A late bloomer, Willingham didn’t make his Major League debut until age 25 and didn’t see more than 29 plate appearances in a season until his age-27 campaign with the Marlins. However, he quickly established himself as an on-base machine and a power threat, as he posted an OPS+ and wRC+ of at least 100 (league average) or better in each season from 2006-14 (with the exception of an OPS+ of 96 last year).

In total, Willingham has put together a .253/.359/.465 batting line with 195 home runs in his Major League career. As Berardino notes, his 35-homer campaign in 2012 makes him one of just three players in Twins franchise history with a 35-homer season, joining late Hall of Famer Harmon Killebrew and 1959 Rookie of the Year Bob Allison. With the Royals almost certainly ticketed for the playoffs, Willingham is set to make the first postseason appearance of his 11-year big league career in October. He’s earned $35.6MM as a Major Leaguer, per Baseball-Reference.com.

Corey Kluber’s emergence as the Indians’ ace began on a rainy day with Triple-A Columbus in 2011, MLB.com’s Jordan Bastian writes in a close at why Kluber has been so successful this season. That day in 2011 is when Kluber began experimenting with his two-seam sinker, which has since become the pitch that allows him to set up his cutter and curveball. Kluber also adds that he’s gotten much better at commanding his cutter this season. Here are more notes on the Indians.

Twins GM Terry Ryan was on-hand in New Britain tonight to see top prospect Byron Buxton’s Double-A debut, but the evening took a scary turn for the five-tool center fielder. Buxton collided with right fielder Mike Kvasnicka and was unconscious on the field for roughly 10 minutes before being driven away in an ambulance and has been diagnosed with a concussion, Ryan said on the MiLBtv broadcast (Twitter links via MiLB.com’s Ash Marshall). It’s been a lost season for the consensus top prospect in baseball, who had already missed much of the season with wrist injuries. Ryan notes that the injury could have been much worse, and reports indicate that Kvasnicka, a Minnesota native whom the Twins acquired from the Astros in minor trade last season, was able to walk off the field (though he, too, was taken to the hospital as a precaution). 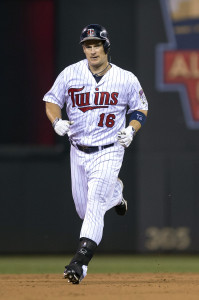 With the trade deadline less than three hours away, here are some notes out of the Big Apple…

The Twins plan to hold onto Josh Willingham through the trade deadline, reports Mike Berardino of the St. Paul Pioneer Press (via Twitter). Minnesota could, however, deal the outfielder over the August waiver period.

Willingham, 35, had been said to be a possible acquisition target of several clubs looking for right-handed pop from the corner outfield. Though he has only a .222 batting average on the year, he has reached base at a .363 clip and slugged a respectable .422 (though that latter figure is well off his career .468 mark). The veteran is earning $7MM this season in the final leg of a three-year pact.

The Royals are in the market for a right-handed hitting bat to play right field, but ESPN’s Jerry Crasnick reports that the team isn’t in on Boston’s Jonny Gomes or Minnesota’s Josh Willingham (Twitter links). Additionally, Crasnick tweets that he isn’t sure the Royals view Chris Denorfia and Justin Ruggiano as upgrades over Justin Maxwell, who is hitting well in Triple-A.

The Royals don’t feel that Gomes is capable of handling right field, and the same applies to Willingham as well. (As Crasnick notes, Willingham’s July swoon hasn’t helped his value.) Crasnick hears from one AL executive that the Twins would very much like to move Willingham, but they’re simply not getting much interest at this time.

Gomes, Willingham, and Denorfia are all free agents at season’s end, while Ruggiano would remain under team control via arbitration. The Royals were said at one point to have interest in Marlon Byrd, but a report yesterday indicated that they were backing off both Byrd and Alex Rios. The Royals are on Byrd’s limited no-trade clause, and he’d reportedly like the Royals to guarantee his $8MM option for 2016 in order to waive that clause.

If you’re wondering who else could be available, MLBTR’s Charlie Wilmoth recently took a look at the trade market for corner outfielders.

It’s been a busy afternoon, but no deals have gone down; let’s round up some worthwhile recent news and rumors as the market heats up: