Outfielder Sam Fuld has announced his retirement after an eight-year MLB career. He’ll build upon his legend by joining the Phillies front office as the team’s major league player information coordinator.

Fuld, 35, is a Stanford graduate who has long been seen as a potential future front office member. He was most recently seen on the field in the World Baseball Classic, playing for Team Israel, which represents a nice bookend for his playing career after rotator cuff surgery kept him out for all of 2016.

In just over fifteen-hundred overall trips to the plate in the majors, Fuld managed only a .227/.307/.325 batting line with a dozen home runs. Yet the former tenth-round pick managed to compile an even 5 career fWAR, due to his highly-rated defensive work and baserunning (including 67 total stolen bases).

Fuld opened his MLB time with the Cubs but will likely be best remembered as a member of the Rays and A’s. He endeared himself to the fans of those two low-budget clubs with his motor and body-sacrificing dives in the field. Fuld ultimately spent the bulk of his time with those two organizations; he also played in part of the 2014 campaign with the Twins, where he enjoyed one of his most productive runs at the plate.

It sounds as if Fuld is already well on his way to making a mark in a non-playing capacity. In his new role, the club says, he’ll “help integrate the use of information in all areas of on-field performance and preparation and make recommendations regarding the most effective areas of future research and analysis.” Former Orioles staffer Ben Werthan will hold a similar position on the minor league side of the equation, the Phillies also announced.

It certainly sounds as if Fuld is being hired to help translate analytical knowledge to the field while hopefully inspiring new frontiers from a player’s perspective. That seems to mesh with the team’s decision to hire the youthful Gabe Kapler as its next manager, a move that many observers are framing as something of a bold gambit.

The short porch in right field at Yankee Stadium isn’t an advantage anymore for the Yankees, Joel Sherman of the New York Post argues. The fact that defensive shifting has become so common means the Yankees can no longer fill their lineup with pull-oriented lefty swingers and rack up singles and doubles at their home park, which has the least right field square footage of any stadium in the majors, Sherman writes. “It definitely has lent to us realizing that a stadium design that used to move us to gravitate to stack lefty hitters and take advantage of our stadium for 81 [home games] has been negated to a significant degree by the shift,” said general manager Brian Cashman. “You have to be aware of it when you acquire talent.” This isn’t necessarily a new problem for the Cashman-led Yankees, who have been shifted against a major league-leading 3,677 times on balls in play since 2010, according to Sherman. In those instances, the Yankees have put up the second-worst batting average in baseball, .193, on grounders and short line drives.

More from the Bombers and two other American League clubs:

Athletics outfielder Sam Fuld requires surgery on a torn rotator cuff, MLB.com’s Jane Lee reports on Twitter. He’ll undergo the procedure on May 18 and will not be ready to return during the 2016 season.

Fuld, a 34-year-old veteran of eight MLB campaigns, avoided arbitration with Oakland at a $1.93MM salary. He’ll continue to accrue service while he’s shelved, and will qualify for free agency after the season.

While he’s seen fairly consistent reserve action since 2011, Fuld has never been very productive with the bat. He owns a .227/.307/.325 career slash line over 1,535 plate appearances. He does add some value with his legs, with 67 career stolen bases and generally excellent baserunning metics. Most of all, Fuld has long been known as a quality defender, with advanced metrics placing strong ratings on his work in left and center.

Oakland would surely have preferred to have Fuld as a depth option, but doesn’t have a particulary strong need for him at present. Indeed, the team’s addition of Chris Coghlan — like Fuld, a left-handed hitter — seemed to occupy his most obvious place in the organization.

Forty-seven-year-old prospect Will Ferrell showed his versatility by playing all 10 positions for 10 different clubs during a whirlwind single-day tour of several Arizona Spring Training camps, an event was dedicated to raise funds for the Stand Up To Cancer and Cancer For College charities.  Ferrell’s day included two at-bats (both strikeouts), a helicopter landing in center field, serving as the Cubs’ third base coach and actually recording an out during his 1/3 inning of work on the mound.  Ferrell was in such demand that he even switched teams within games, so it’s probably just a matter of time before the phenom inks a nine-figure contract.

Here’s some slightly more serious news from around the game…

END_OF_DOCUMENT_TOKEN_TO_BE_REPLACED 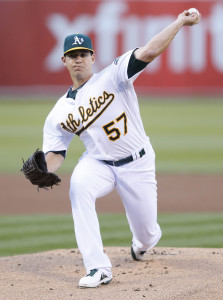