The Marlins made the somewhat surprising decision to designate right-hander Bryan Morris for assignment earlier today, three months after the previously reliable bullpen arm underwent back surgery. As Barry Jackson of the Miami Herald writes, the Fish simply felt they needed Morris’ roster spot (presumably meaning this winter, as he was on the 60-day DL but activated in order to be designated). However, Morris’ agent, Jim Kuzmich, tells Jackson that president of baseball ops Michael Hill told him to “keep [the Marlins] in mind” if Morris goes unclaimed and hits free agency this winter. That would indicate that the Marlins are open to bringing Morris back into the fold on a minor league contract, though based on his history, many teams would figure to show interest in Morris as a free agent. While he’s not a big-time strikeout arm, the 29-year-old Morris pitched to a 2.30 ERA with 7.1 K/9 and 3.6 BB/9 in parts of three seasons with Miami. And, on top of that, he has a hefty 58.6 percent ground-ball rate in 215 career innings between the Pirates and Marlins.

The Phillies announced today that they’ve acquired outfield prospect Joey Curletta from the Dodgers to complete last month’s Carlos Ruiz trade. The trade, then, will officially go in the books as Ruiz to the Dodgers in exchange for A.J. Ellis, Curletta and right-hander Tommy Bergjans.

Curletta, 22, was a sixth-round pick by the Dodgers out of Mountain Point High School in Phoenix, Ariz. back in 2012. He’s split the season between Class-A Advanced and Double-A for the second straight year, though his numbers in 2016 are superior to the ones he logged as a 21-year-old at those same levels in 2015. Curletta has batted .251/.323/.463 with 17 homers, 17 doubles and five triples in 409 plate appearances this season, though his 30 percent strikeout rate is indicative of the fact that there’s still plenty of room for growth in the right-handed hitter’s approach at the plate.

Curletta didn’t rank among the Dodgers’ top 30 prospects, though Baseball America has previously written that his two best tools are his raw power and his throwing arm. The 6’4″, 245-pounder has been described by BA as a “physical monster” in the past and has been limited to the corner outfield (primarily right field), where his strong arm profiles rather well.

J.P. Hoornstra of the Southern California News Group was the first to report that Curletta was headed to the Phils to complete the trade (Twitter link).

Before the Aug. 1 non-waiver trade deadline, the Dodgers discussed a deal with the Brewers that would have sent outfielder Ryan Braun to Los Angeles, reports FOX Sports’ Ken Rosenthal (video link). While Braun has since cleared waivers, meaning the Dodgers (or another team) could make a trade for him this month, that would require overcoming potential complications. For instance, any team acquiring Braun would likely want the Brewers to eat a significant portion of the $76MM left on his contract, says Rosenthal, who adds that Milwaukee might be hesitant to assist a high-revenue club like the Dodgers in paying the 32-year-old. If the Dodgers and Brewers aren’t able to swing a trade in August, they could revisit talks during the offseason.

Here are a few reactions to the Phillies and Dodgers’ recent catcher swap, in which Carlos Ruiz headed to Los Angeles while A.J. Ellis, pitcher Tommy Bergjans and a player to be named or cash went to Philadelphia.

The Phillies will promote catching prospect Jorge Alfaro, according to Jeff Passan of Yahoo Sports (via Twitter). His ascension comes on the heels of today’s trade of long-time receiver Carlos Ruiz.

Though the swap this evening brought in veteran A.J. Ellis, it seems that Alfaro will at least get a brief taste of the majors. Philly has utilized Cameron Rupp as its primary backstop this year, and he certainly isn’t going anywhere after turning in a strong performance. 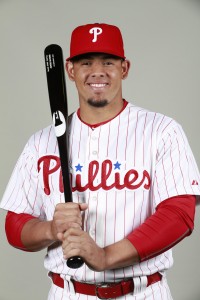 Alfaro, 23, has long been considered one of the game’s top 100 prospects. He came to the Phils along with several other exciting young players in the deal that sent Cole Hamels to the Rangers last summer. Though he was set back by a serious ankle injury prior to his change of scenery, Alfaro remains an intriguing talent.

Playing at Double-A this year, Alfaro has posted a .279/.322/.444 batting line with 13 long balls over 399 trips to the plate. He is as prized for his defensive tools as he is for his promising power bat, though his overall receiving work is still catching up to his big arm. That has led to some suggestions that he could change positions, though Alfaro says he has no desire to move out from behind the dish.

For the Phillies, the move offers a chance to look at both Rupp and Alfaro. The organization features another highly-regarded catcher in Andrew Knapp, who was ahead of Alfaro at Triple-A but has slashed only .259/.324/.375 in his first 408 plate appearances at the highest level of the minors.

While it seemed at one point that Rupp was more of a placeholder for those two, the 27-year-old now looks to be an appealing future piece in his own right. He has broken out in 2016, delivering a .813 OPS and 14 long balls in 325 turns at the plate.

All said, it’s an enviable position to be in for the rebuilding Phillies, who can lean on Rupp while trying to tap into the upside of Alfaro and Knapp. One might have suspected that Ellis was included only to offset salary, but GM Matt Klentak told reporters that he was “adamant” that the veteran Ellis be included in the return in the Ruiz deal, as Matt Gelb of the Philadelphia Inquirer reports. It seems, then, that Alfaro may only fill in temporarily, though with Ellis set to hit the open market after the year he may be first in line to join Rupp in the majors next season.

Dodgers catcher A.J. Ellis is the top game caller in the league, writes Harry Pavlidis for ESPN. In recent years, new data and techniques have allowed analysts to measure catcher framing skills. Pavlidis evaluated the various factors controlled by a catcher’s game calling and converted them into a runs saves statistic. Ellis draws negative reviews for the other aspects of his defensive game, but he’s credited with 38 game calling runs saved from 2012-2014. Rounding out the top five are Alex Avila, Yadier Molina, Derek Norris, and Ryan Hanigan.

One-year agreements for arbitration-eligible players figure to begin coming in rapidly this week, with the deadline to exchange figures coming this Friday. We’ll keep track of today’s agreements in this post, with all projections mentioned referring to those of MLBTR contributor Matt Swartz:

Veteran right-hander LaTroy Hawkins announced this morning on MLB Network’s Hot Stove show that the 2015 season will be the last of his lengthy career (h/t: Ken Rosenthal). The soon-to-be 42-year-old posted a 3.31 ERA with 23 saves, 5.3 K/9 and 2.2 BB/9 in 54 1/3 innings for the Rockies last season. While he may not get the Mariano Rivera farewell tour, Hawkins has appeared in 1000 games (currently 16th all-time) dating back to 1995. Selected by the Twins in the seventh round of the 1991 draft, Hawkins could move into the top 10 of all-time in terms of career appearances with a full, healthy season.

Speculation that the Dodgers will move one of their outfielders this winter is nothing new, and president of baseball operations Andrew Friedman acknowledged the likelihood of that outcome today. As Mark Saxon of ESPN Los Angeles writes, Friedman told reporters this morning, “I think it’s most likely the best course of action to move one of those players,” referring to Matt Kemp, Andre Ethier and Carl Crawford. Saxon writes that the belief is that Ethier is most likely to be moved, followed by Crawford, but Friedman wouldn’t rule out listening to offers for Kemp, nor would he rule out trading two outfielders and opening the season with Joc Pederson in an everyday role. He did imply that Kemp would be the most difficult to move, however: “Obviously what Matt has done, what Matt’s capable of doing, is significant, especially in this day and age with the run-scoring environment the way it is. His ability in the batter’s box is different.” Perhaps unsurprisingly, Kemp has already drawn some interest, per Jon Heyman of CBS Sports.

More on the Dodgers…

The front office shuffling of the NL West continued today with another pair of moves. The Dodgers will hire Scott Bream away from the Tigers to be their new pro scouting director, tweets Mark Saxon of ESPN Los Angeles. Meanwhile, the Padres announced that they’ve promoted regional supervisor Mark Conner to director of scouting. The 38-year-old Conner joined the Friars in 2010 as an amateur scout and was the scout responsible for signing the highly touted Matt Wisler.

Here’s more from the NL West…