As spring training games kick off, let’s check in on some injury situations around the game.

Mets general manager Brodie Van Wagenen made waves last offseason with his aggression in the trade market, dealing from the Mets’ minor leagues to bolster the Major League roster with the likes of Robinson Cano and Edwin Diaz. However, Van Wagenen suggested at the GM meetings that his club will be hesitant to once again dip into the farm system to facilitate trades, reports Tim Healey of Newsday. The Mets’ crop of prospects isn’t an especially deep one—FanGraphs ranks them as having the 22nd-best minor-league system in baseball—and particularly lacks players who are close to the Majors and could contribute in 2020. That said, Healey believes that high-ceiling prospects in the lower minors—a group that includes the likes of Ronny Mauricio, Mark Vientos, and Matthew Allan, among others—will be hard to pry from Van Wagenen’s hands. After an 86-win season last year, it seems that the Mets feel they can make the jump to contention while still hanging onto their young prospects in hopes of maximizing their competitive window.

Here’s more from around the Senior Circuit…

Rodgers, the No. 3 overall pick by the Rockies in 2015, made his MLB debut this season and hit .224/.272/.250 in a small sample of 81 plate appearances. He’s been on the injured list since late June with what was initially termed a shoulder impingement, but it seems the extent of the injury was considerably greater than first believed.

Rodgers has been a fixture on prospect rankings since the moment he was drafted, entering the 2019 campaign as a consensus top-25 prospect in all of MLB. He did little to dispel that notion in Triple-A Albuquerque this season, hitting .350/.413/.622 with nine homers, 10 doubles and a triple in 160 plate appearances prior to his call up to the big leagues. It’s a hitter-friendly environment, to be sure, but Rodgers’ offensive output still checked in at 48 percent better than the league average, per wRC+.

Drafted as a shortstop, Rodgers now seems likely to move over to second base on a long-term basis. The Rockies have arguably the best left side of the infield in all of baseball with newly extended third baseman Nolan Arenado and shortstop Trevor Story locked in as long-term fixtures at their respective positions. Second base is less certain, though Ryan McMahon and Garrett Hampson present a pair of high-upside young options there as well. Given the Rockies’ wealth of infield talent, it’s possible that they’ll eventually make a move involving a young infielder. However, Rodgers’ injury serves as a reminder that perceived “surpluses” of this nature all too often sort themselves out in an unfortunate manner.

YESTERDAY: The Rockies are expected to promote top prospect Brendan Rodgers, according to Thomas Harding of MLB.com. Corresponding moves remain to be seen, but a recent injury to shortstop Trevor Story is said to have played a role in the decision. 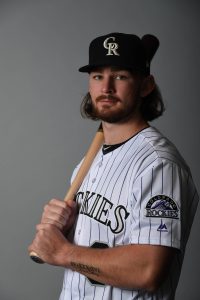 The 22-year-old Rodgers has been considered an elite prospect ever since he went to the Colorado organization with the third overall pick in the 2015 draft. He has steadily marched up the club’s farm system, briefly reaching Triple-A late last year. Rodgers entered the current season with consensus top-thirty leaguewide prospect billing; MLB.com was most bullish, grading him the tenth-best prospect in the game.

Rodgers has shown himself more than ready for a MLB opportunity early in the 2019 campaign. He’s slashing .356/.421/.644 with nine home runs over 152 plate appearances thus far at Albuquerque — impressive numbers even in an offensively robust league with a launching pad for a home park.

The Rockies could certainly stand to receive a boost. They enter play today at two games under .500 and 7.5 back of the Dodgers in the NL West. Whether Rodgers can perform at a top-end level out of the gates remains to be seen. But it’s a shot worth taking for a club that has received little with the bat from its other options at second base — where he’ll presumably line up except when he plays short in relief of Story.

There’s no reason to believe that Story’s injury will sideline him for long, or even that he’ll require a trip to the injured list. But the middle-infield duo has lacked punch even with the established slugger at full health. Story has held up his end of the bargain, but Garrett Hampson, Ryan McMahon, and Pat Valaika have not. The Rox offensive output at second base has easily been the worst in baseball this year. Hampson was already optioned down recently; another of those players could be pushed out to make way for Rodgers. (Both can still be optioned.)

Harding indicates that the promotion will likely occur on Friday. If that indeed comes to pass, then Rodgers can record as many as 136 days of MLB service this season. That would set him up for potential Super Two qualification in the future, so long as he’s able to keep his roster spot.

Mariners reliever Hunter Strickland is “100% ready” for Wednesday’s Tokyo opener against the Athletics after being sidelined with back issues since March 3, per MLB.com’s Greg Johns. The high-strung Strickland, now 30, will apparently get first crack at the closer’s role for the new-look Mariners, who signed the righty to a one-year, $1.3MM deal after he was non-tendered by the Giants ahead of the November 30 deadline. After eight years in the minors, the then 25-year-old Strickland came out blowing smoke for the 2014 World Champion Giants, dominating early with a fastball that reached 100 mph on the regular. Multiple on-field dustups, including well-publicized boxing matches with both longtime nemesis Bryce Harper and a clubhouse wall, likely spelled the end for Strickland in San Francisco. After a 2015-17 stretch in which the 6’4 righty posted identical 0.8 fWAR totals with a K rate hovering around 8.5 per nine, Strickland endured his worst season in ’18, struggling to throw strikes, miss bats, and keep the ball in the park. His average fastball velocity, too, fell to a career-low 95.7 MPH, while heavier dependence on a changeup resulted only in withdrawal. Still, if the flamethrower can re-stoke his early-career heat, and direct much of it toward what seemed to be an ever-shriveling strike zone, the Mariners may yet have a massive bargain on their hands.

In other news from around the game’s Western divisions…

Tyson Ross spoke recently with Kevin Acee of the San Diego Union-Tribune about the likelihood that he’ll be traded by the Padres at some point in the near future. Ross spoke like a pitcher who is anticipating that he’ll be traded, though he notes that his experience with the Padres in 2015 taught him that there are no certainties. That season, Ross was considered to be among the top trade assets in baseball, but the Padres held onto him — a decision GM A.J. Preller likely regrets, given that Ross was injured for the whole 2016 season and ultimately released. “I was one of the bigger names being thrown around as a trade piece,” Ross said of that 2015 campaign. “A.J. held on to me. He didn’t get his return on that. If he wants to make a move at some point, that’s the game. For him, it would be a great investment — buy low, sell high.”

MLBTR’s Jeff Todd recently took a look at Ross and another pair of Padres starters, Clayton Richard and Jordan Lyles, and explored their trade candidacy as the summer approaches. Ross, right now at least, looks like a rare thoracic outlet surgery success story; in 60 1/3 innings he’s notched a 3.13 ERA with 9.6 K/9, 3.4 BB/9, 0.75 HR/9 and a 44.1 percent ground-ball rate.

A few more notes from the game’s Western divisions…

Unrest on the players’ side of the fence in a dismally slow offseason reached the point where player reps in the union asked if whether it was viable for even those who have signed contracts to collectively refuse to report to Spring Training until Feb. 24, reports Ken Rosenthal of The Athletic (subscription required). That represents the mandatory reporting date, though pitchers and catchers (and some others) will report to camp prior to that date in a given year. The MLBPA informed those representatives that doing so would violate the CBA and constitute an “unlawful strike,” prompting the notion to be dropped. The very thought further illustrates the overall discontent of players, Rosenthal notes, and that general level of frustration doesn’t help matters as the league and union continue to negotiate the implementation of pace-of-play measures.

Some other notes from around the game…

The market for starting pitchers has more question marks than certainties this summer, Ken Rosenthal of FOX Sports observes. Rosenthal runs down a number of potentially available arms, noting that injuries and/or significant contracts make many of them tough sells. Regarding Zack Greinke, Rosenthal notes that while his contract always made an in-season trade seem like a long shot, the fact that the D-backs are contending and are in current possession of a Wild Card spot all but eliminates the possibility that he’ll be traded this summer.

With the draft out of the way, trade talk should slowly begin to heat up in the coming weeks. Here are a few more items of potential interest…

Athletics ace Sonny Gray will not pitch again this year, MLB.com’s Jane Lee tweets. Gray left his start on Friday with tightness in his hip. Gray has been a huge standout in what’s otherwise been a frustrating season in Oakland — he’s pitched 208 innings with a 2.73 ERA, 7.3 K/9, 2.6 BB/9 and a 52.7% ground ball rate, posting ace-caliber numbers for a 65-91 team. Starting in Gray’s place on Wednesday will be veteran Barry Zito, who will be making his third start of the season in his comeback with the A’s. Here are more notes from throughout the game.