The Brewers’ decision to designate Luis Jimenez for assignment was mostly the result of Jimenez’s poor fit for the team’s current situation, MLB.com’s Adam McCalvy reports. The team had hoped to use Jimenez as a late-inning defensive replacement for the aging Aramis Ramirez, but there turned out to be few situations in which he came in handy. “Unfortunately, we thought the season would go differently so far and I would use him in a different role,” says manager Ron Roenicke. “Because we’re always behind, his role hasn’t become important.” Here’s more from the NL Central.

Twins outfielder Byron Buxton is the top prospect in baseball, per MLB.com’s top 100 prospects. The Cubs have two prospects in the top five – Kris Bryant (second) and Addison Russell (fifth). The Dodgers have three in the top 13 – Corey Seager (seventh), Julio Urias (eighth), and Joc Pederson (13th). The Cubs and Twins are the two teams with five prospects in the top 50. Here’s more news from around the league.

Midnight EST is the deadline for teams to add players to their 40-man roster in order to protect them from being selected in next month’s Rule 5 Draft. Jonathan Mayo of MLB.com lists the notable prospects who are newly Rule 5 eligible. Of course, the decision whether or not to protect a player has as much to do with roster flexibility and his expected ability to stick on a big league roster for a full season as it does the player’s overall prospect value.

We’ll keep tabs on the day’s 40-man additions here, and you can also check Baseball America’s running updates, which includes breakdowns of the players added.

END_OF_DOCUMENT_TOKEN_TO_BE_REPLACED

A recent MRI showed that C.J. Edwards’ shoulder has no structural damage, but the Cubs prospect could still miss over a month, Gordon Wittenmyer of the Sun-Times reports. For the Cubs, this is good news — manager Rich Renteria tells the Tribune’s Mark Gonzales (via Twitter) that Edwards’ diagnosis provides “a tremendous sigh of relief.” Edwards had “tightness” while pitching in a side session earlier this week. Baseball America’s Prospect Handbook 2014 ranked Edwards the Cubs’ third-best prospect in a strong system, behind only Javier Baez and Kris Bryant. He pitched brilliantly down the stretch for Class A+ Daytona last season after arriving from the Rangers in the Matt Garza trade. Here are more notes from around baseball.

Here’s the latest from Wrigleyville… 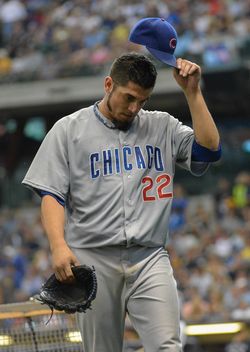 Earlier this afternoon, the Rangers acquired Matt Garza from the Cubs in exchange for Mike Olt, C.J. Edwards, Justin Grimm and at least one player to be named later (the Cubs could also receive two PTBNLs, depending on who they select as the first from a list of pitchers). Here are some quotes from both general managers, reactions from scouts and media members, as well as some more details surrounding the initial trade that fell apart last Friday…

For a while earlier today, it looked like the top available starting pitcher on the trade market could pack his bags for Texas. The Cubs and Rangers reached the point of exchanging medical information on six players who were apparently ready to change teams, most prominent among them the Cubs' Matt Garza.

Cubs GM Jed Hoyer and president Theo Epstein have already been active on the trade front this summer, dealing Scott Feldman and Steve Clevenger to the Orioles, sending Scott Hairston to the Nats, swapping Carlos Marmol and an international bonus slot for Matt Guerrier, and sending Ronald Torreyes to the Astros for international bonus money. A Garza deal would be the duo's highest-profile trade of the summer and arguably the highest-profile trade of their tenure with the Cubs. It could also have the most impact of any 2013 trade deadline deal.

With the Cubs now reportedly looking to open talks back up with other clubs, even as they continue to talk with the Rangers, let's take stock of where we're at and track new updates right here:

The Matt Garza rumors have picked up steam in the past couple of days, with ESPN's Jim Bowden stating Wednesday that there's an 80 percent chance he's traded before his next start. On Tuesday, we learned that the Cubs have a slight preference toward pitching prospects as opposed to position players and that the Rangers are unwilling to part with Martin Perez to acquire Garza. Here's the latest on Garza…