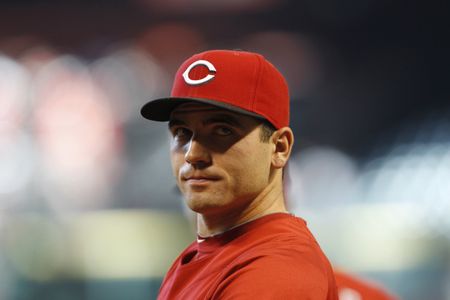 Let's take a look at some Reds-related tidbits courtesy of The Cincinnati Enquirer's John Fay..

The Mariners added Jack Cust and Miguel Olivo at the Winter Meetings, but they continue to tinker.  The Ms offered a contract to outfielder Laynce Nix, tweets John Hickey of AOL Fanhouse.

Nix, 30, hit .291/.350/.455 in 182 plate appearances across 97 games for the Reds this year, playing mostly left field.  He was shielded against lefties by manager Dusty Baker.  Nix missed most of September with an ankle injury and was outrighted in November.

Laynce Nix has cleared waivers, refused an outright assignment and become a free agent, according to MLB.com's Mark Sheldon (on Twitter). The 30-year-old batted .291/.350/.455 in 182 plate appearances this year after the Reds signed him to a minor league deal.

Nix played all three outfield positions for the second consecutive season, spending most of his time in left field. However, he missed weeks with a sprained left ankle in August and September and saw his homer total drop from 15 to four. The left-handed hitter has handled righties (.738 OPS) much better than lefties (.521 OPS) over the course of his eight-year MLB career.

The Reds agreed to sign Laynce Nix to a minor league deal, tweets John Fay of the Cincinnati Enquirer. Nix became a free agent about a month ago, but the Reds stayed in contact with him and ultimately brought him back. Nix set a career high with 15 homers this year, hitting .239/.291/.476 in 337 plate appearances for the Reds.

Some Reds notes courtesy of John Fay of the Cincinnati Enquirer, who spoke to GM Walt Jocketty…

Links for Monday, the first day of the Winter Meetings in Indianapolis…

To track the Reds throughout the offseason, check out MLBTR's team archive.

Outfielder Laynce Nix has been outrighted by the Reds and elected free agency, according to MLB.com's Mark Sheldon.  Nix was considered a non-tender candidate, as the Reds have plenty of outfielders already.  In a few weeks they must decide whether to tender Jonny Gomes a contract (seems like a good idea to me).

Nix, 29, received the most playing time of his career since 2004 this year.  He hit .239/.291/.476 in 337 plate appearances, knocking 15 home runs and playing left field.  Reds manager Dusty Baker shielded him from left-handed pitching most of the year.

MLB.com's Mark Sheldon cleaned out his inbox and answered a few questions from Reds fans today.  Here are some of the more pertinent details…