That breakdown indicates Berrios’ opt-out decision will come with a total of $48MM remaining on the contract. However, Davidi adds that escalators based on Berrios’ 2025-26 stats could boost his 2027-28 salaries by $5MM apiece. If he triggers all the escalators, Berrios would decide between the remaining two years and $58MM or reentering the market in advance of his age-33 season.

7:30am: The Blue Jays’ first big move of the offseason is to lock up one of their own, as they announced Thursday that they’ve signed right-hander Jose Berrios to a seven-year extension that will reportedly guarantee him $131MM. Berrios is represented by Wasserman. 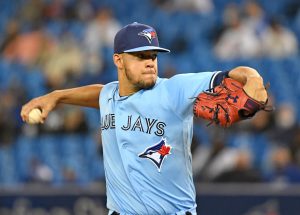 MLBTR contributor Matt Swartz had projected Berrios would earn just shy of $11MM for 2022 in his final trip through arbitration, meaning this extension effectively buys out six free agent years at $120MM, although the actual breakdown of the contract is not known at this point. Berrios will be able to opt out after the fifth year of the deal and has limited no-trade protection. There are also escalators in the deal that could increase the value of the contract by $10MM.

The 27-year-old Berrios was acquired from the Twins at July’s trade deadline and had been set to reach free agency after the 2022 season. Instead, the Blue Jays will keep him around for an extended stay, hoping that he anchors their rotation well into the future. This extension runs through 2028, which will be his age-34 season.

The Blue Jays clearly valued Berrios very highly based on the package they sent to the Twins, with both Austin Martin and Simeon Woods Richardson being highly-touted prospects. At the time of the trade, Martin was only one year removed from being the 5th overall selection in the 2020 draft and was considered to be one of the top-25 prospects in the game by each of FanGraphs, Baseball America and MLB.com. Woods Richardson was not on Baseball America’s list but was 49th at FanGraphs and 68th at MLB.com. It was believed by many that this was a steep price to pay for a year and a half of Berrios’s services, but the Blue Jays have doubled down on their belief in him by locking him up for at least four more years on top of that.

This now ranks as one of the largest extensions ever for a starting pitcher between five and six years’ service time, trailing only the $215MM garnered by Clayton Kershaw, the $175MM by Stephen Strasburg and $144MM for Cole Hamels. If Berrios pitches well over the next five years, he can opt out after the 2026 campaign, which will be his age-32 season. That could give him the opportunity to hit free agency and land another solid payday, after having already banked over $100MM in career earnings.

The Blue Jays had some long-term uncertainty in their rotation, with Berrios and Ross Stripling set to reach free agency after 2022 and Hyun-Jin Ryu after 2023, leaving youngsters like Alek Manoah and Nate Pearson as the only future options. Locking Berrios down through 2028 provides some much-needed stability as they look to complement that group this offseason.

The club’s 2022 payroll is currently sitting around $115MM, in the estimation of Jason Martinez of Roster Resource. Their opening day number in 2021 was $135MM, per Cot’s Baseball Contracts, giving them about $20MM of space to work with before they reach last year’s number. However, the club may also increase spending this year, which would give them even more ability to supplement the roster. It’s unknown exactly how high they anticipate the budget to go between now and the spring, but they have run payrolls over $160MM in years past.

The club has already been connected in rumors to Justin Verlander, Andrew Heaney and Eduardo Rodriguez, the latter having signed with the Tigers yesterday. Despite winning 91 games in 2021, the Jays somehow finished fourth place in the AL East, one game away from a Wild Card berth. With Robbie Ray, Steven Matz and Marcus Semien all now free agents, the club still has work to do in order to stay afloat in that cutthroat environment. Extending Berrios doesn’t necessarily improve the 2022 club on paper, but it should serve as a signal to other free agents that the team is committed to do what it takes to be competitive for the foreseeable future.