The Rockies announced they’ve selected the contract of right-hander Chi Chi González. Reliever Scott Oberg has been placed on the 60-day injured list to open a 40-man roster spot. Oberg’s career is in jeopardy after he underwent surgery to remove blood clots from his right elbow yesterday.

González has pitched in twenty games (starting 16) for Colorado over the past two seasons. The former Ranger hasn’t performed particularly well, managing just a 5.66 ERA/5.62 FIP with worse than average strikeout and walk rates (16.8% and 11.7%, respectively). Still, the 29-year-old will give manager Bud Black a multi-inning option capable of working out of the rotation or in long relief.

Additionally, Colorado announced they’ve optioned Lucas Gilbreath and Colton Welker and reassigned a host of non-roster invitees (Greg Bird, José Briceño and Eric Stamets among them) to minor-league camp. Dereck Rodríguez and Connor Joe are the only non-roster players who remain on the major league side of Spring Training.

The Rockies have announced a minor-league deal with infielder Eric Stamets. He’ll receive an invitation to MLB Spring Training.

Stamets, 28, was pressed into duty early in 2019 by the Indians but struggled mightily in brief MLB action. He went down on strikes in half of his 48 plate appearances and managed just a pair of hits. Stamets was ultimately dropped from the 40-man and allowed to depart at the end of the season.

The Rockies can’t expect much offense. Through over one thousand Triple-A plate appearances, Stamets carries a .230/.299/.379 slash line. But he’s obviously valued for his glovework at shortstop and ought to function as depth or perhaps challenge for a utility role in camp.

In the immediate aftermath of the trade deadline, a handful of clubs cleared 40-man roster space with a series of designations. Many of those players have since cleared waivers, and we’ll round up those minor moves here…

The Indians announced Tuesday that they’ve selected the contract of infielder Mike Freeman from Triple-A Columbus and optioned fellow infielder Eric Stamets to Triple-A Columbus in his place. A corresponding 40-man move wasn’t required, as Cleveland had only 39 players on its 40-man.

Freeman, 31, has seen sparse action in the Majors in each of the past three seasons (including one lone plate appearance with the Cubs in 2018), hitting a combined .134/.211/.207 across 91 plate appearances. Lackluster as that small-sample output may be, Freeman is an accomplished Triple-A hitter, as evidenced by a lifetime .305/.372/.418 slash through 2030 PAs at that level. While he’s light on power, Freeman has consistently managed to hit for average and get on base at the top minor league level. He’s walked in 9.2 percent of those 2030 PAs in Triple-A and kept his strikeout rate to a relatively low 16.8 percent.

Track record aside, Freeman needn’t do much to give the Indians at least a modest uptick in offensive production. The 27-year-old Stamets made his big league debut on Opening Day this season and has seen regular work in 15 games. However, he’s collected just two hits and five walks in 48 trips to the plate, resulting in a disheartening .049/.149/.073 slash in his first look at MLB pitching. As a glove-first player, there’s perhaps hope that Stamets could eventually fill a utility spot with the organization, but he looked decidedly overmatched in trying to step into some enormous shoes with Francisco Lindor on the shelf.

Thankfully for Cleveland fans, there’s hope on the horizon with regard to Lindor; the star shortstop embarked on a Triple-A rehab assignment tonight.

The Indians announced today that they’ve claimed infielder/outfielder Rob Refsnyder off waivers from the Blue Jays and designated left-hander Kyle Crockett and Dylan Baker for assignment. Cleveland has also selected the contracts of right-hander Julian Merryweather and infielders Willi Castro, Yu Chang and Eric Stamets. That series of moves fills the Indians’ 40-man roster and leaves the Blue Jays’ 40-man roster at a total of 33 players.

The 26-year-old Refsnyder split the 2017 season between the Yankees (who originally drafted him in 2012) and the Blue Jays but struggled to a composite .170/.247/.216 slash line. While Refsnyder has long turned in intriguing offensive stats in the minors, he’s batted just .233/.306/.311 in 320 big league plate appearances. At one point, Yankees fans hoped that Refsnyder could hold down the team’s second base job in the Majors, but he’s now split his time fairly equally between second, first base and left field in the Majors.

Baker, 25, has scarcely pitched since the 2015 season due to injuries, including Tommy John surgery. The 2012 fifth-rounder has tossed just 21 1/3 innings across three levels in the past three minor league seasons combined, though he’s posted a 3.58 ERA in 241 2/3 innings in his minor league career when healthy.

Chang (No. 4), Castro (No. 9) and Merryweather (No. 12) each ranked within the Indians’ top 30 prospects, according to Jim Callis and Jonathan Mayo of MLB.com. 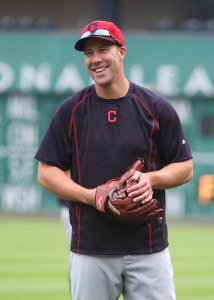