“More than anything, it’s just time,” the 39-year-old Lopez tells Rosenthal. “It’s a young man’s game. Although I think I can compete, it’s getting harder and harder to get ready for spring.”

A former fourth-round pick back in 1998, Lopez was a key member of four World Series teams: the Red Sox in 2007 and the Giants in 2010, 2012 and 2014. While he struggled with the Rockies early in his career, Lopez eventually solidified himself as a durable, dependable weapon against left-handed opponents and enjoyed a very nice 14-year career in that role.

Lopez earned more than $28MM in his Major League career, per Baseball-Reference.com. He tells Rosenthal that he’s not certain what’ll come next for him beyond his playing days, but we at MLBTR wish him the very best in whatever lies ahead.

No-trade protection (whether in the form of contract clauses or 10-and-5 rights) have long been a factor in deal-making.  MLB.com’s Anthony Castrovince chronicles some famous instances throughout baseball history of players blocking trades, and some current players mentioned on the rumor mill whose ability to be moved is complicated by their own full or partial no-trade clauses.  Here’s more from around baseball…

The latest on Toronto:

Though Tyler Chatwood is entering his last year under contract, there hasn’t been any sign that the Rockies are considering trading the righty, Patrick Saunders of the Denver Post writes as part of a reader mailbag.  Chatwood missed all of 2015 recovering from Tommy John surgery and posted solid numbers in his comeback year, managing a 3.87 ERA, 6.66 K/9 and a 57.2% grounder rate over 158 innings.  It’s unclear whether the Rockies can extend Chatwood given his issues pitching at Coors Field, and he’d make a very interesting trade chip in this offseason’s thin free agent pitching market.  That said, given how Colorado has traditionally struggled to find any viable rotation help, the team might prefer to hang onto Chatwood for as long as possible.  Saunders’ entire mailbag piece is well worth a read, as he also addresses such topics as the Rockies’ first base search and new manager Bud Black.

Here’s more from around the NL West…

Padres GM A.J. Preller is back on the job now that his 30-day suspension has ended, though both Preller and the organization may need more time to repair their reputations around baseball.  ESPN’s Buster Olney (subscription required) reports that several teams will adjust how they negotiate with San Diego from now on, while one team has simply refused to consider any trades with Preller and the Padres.  There is also still “a river of industry speculation” that the Padres could face lawsuits about their handling of player medical information.  Here’s some more from around the NL West…

Giants lefty Javier Lopez is interested in pitching again in 2017, as Alex Pavlovic of CSNBayArea.com reports. The 39-year-old had seemed to be a candidate to retire after the year, when his three-year, $13MM contract expires.

“I don’t know what’s next for me,” Lopez said after the Giants were bumped from the postseaon. “I’m a free agent and we’ll see what happens. If I have the opportunity to come back, I’ll welcome that.”

There are several ways to interpret those comments, including that he may only be interested in pitching if he can do so in San Francisco, where he has played since 2010. But it seems fair to expect that Lopez will be open to opportunities with other organizations this winter.

The level of open-market interest in the fourteen-year veteran remains to be seen. He threw only 26 2/3 innings this year despite making 68 appearances, with Giants skipper Bruce Bochy deploying him as perhaps the truest LOOGY in baseball.

Lopez ended the year with a 4.05 ERA, which is his worst mark in San Francisco but really isn’t all that relevant given the unique nature of his usage. More notably, he exhibited some erosion in the strikeout-to-walk department, managing only 15 strikeouts against 15 walks on the year. Though Lopez has succeeded for most of his career with an uninspiring K/BB ratio, he also ended 2016 with a 6.3% swinging strike rate that represented a clear personal low.

Lopez did manage to limit the ninety opposing lefties that he faced to a .208/.315/.312 batting line, and the ability to dominate in that area is the key skill for which he’d be pursued. The 28 righties who stepped into the box against him posted a .348/.464/.522 slash, but Lopez has long carried extreme platoon splits.

NOVEMBER 26: The Giants confirmed the deal via press release.

NOVEMBER 21: Giants GM Brian Sabean has shown an affinity for retaining his own guys, even if it comes at top-of-the-market value, and he's done so again by agreeing to terms with left-hander Javier Lopez on a three-year deal. Andrew Baggarly of CSN Bay Area tweets that contract that has been in the works is a done deal, pending a physical. 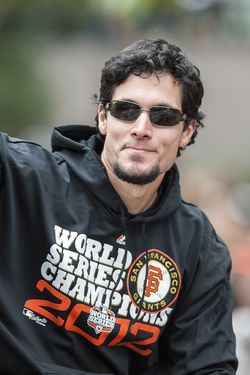 It's reported to guarantee Lopez, a client of Meister Sports Management, $13MM for his age 36-38 seasons. An official announcement is expected today.

Lopez's previous contract paid him $8.5MM over a two-year term, so in terms of average annual value, his new contract gives him a yearly raise from $4.25MM to $4.33MM. That's not an exorbitant raise, but it's probably fair to question the decision to guarantee three years to a reliever who will turn 37 next July.

Lopez was clearly one of the top lefty relievers on the market, if not the top lefty on the market. Now that he has a new contract in hand — and a lucrative one at that — southpaws Boone Logan, J.P. Howell and Scott Downs stand to benefit from what they hope will be a market-setting deal.

The Giants' relief corps figures to be solid in 2014, with Lopez, Jeremy Affeldt and Santiago Casilla forming a bridge to photo-bombing bullpen anchor Sergio Romo. Sabean has already been highly active in the past few months, agreeing to extensions with Hunter Pence and Tim Lincecum in addition to inking Tim Hudson to bolster the team's rotation.

Andrew Baggarly of CSN Bay Area first tweeted that the Giants were fully engaged in contract talks with Lopez. Ken Rosenthal of FOX Sports added that it would be a multiyear deal (Twitter link), Jon Heyman of CBS Sports reported that it'd be a three-year deal (on Twitter), and Steve Berman reported the $13MM value. Rosenthal also tweeted earlier today that the guarantee language was the last remaining aspect needing to be ironed out.

The Red Sox' recent experience shows the need for teams to be flexible at the closer position, writes ESPN's Jerry Crasnick. The Sox traded four players last offseason to get Joel Hanrahan (and infielder Brock Holt), but Hanrahan quickly went down with an elbow injury. They then replaced him with Andrew Bailey, and then Koji Uehara, who pitched brilliantly. The Red Sox weren't the only playoff team that changed closers for one reason or another, Crasnick notes — so did the Cardinals, Pirates, Tigers, Dodgers and Indians. That's worth keeping in mind this offseason, where the market for closers includes Joe Nathan, Grant Balfour, Joaquin Benoit, Brian Wilson, Fernando Rodney and Edward Mujica. Here are more notes from around the big leagues.

The Giants and Javier Lopez have finalized a three-year, $13MM contract, pending a physical, and Joel Sherman of the New York Post tweets that the exam may not take place until next week. Here's more out of the NL West…

12:40pm: Lopez's deal will be worth $13MM over three years, according to Steve Berman, who also reported San Francisco's Tim Hudson signing this week.

WEDNESDAY, 10:42am: Lopez will receive a three-year deal, but the agreement is not yet finalized, according to Jon Heyman of CBS Sports (on Twitter).

TUESDAY, 3:07pm: Giants vice president Bobby Evans tells Jim Bowden of MLB Network Radio that the two sides have agreed on base salary and years but are still working out the other elements of the contract. There's nothing in writing yet, according to Evans (Twitter links).

2:33pm: The Giants close on multi-year deal with Lopez, a source tells Ken Rosenthal of FOX Sports (on Twitter).

1:53pm: The Giants are "fully engaged" with Javier Lopez and hope to re-sign him in the near future, general manager Brian Sabean tells Andrew Baggarly of CSN Bay Area (Twitter link).

Lopez just wrapped up a two-year, $8.5MM contract with the Giants and is said to be looking for another multiyear deal on the free agent market. The Giants acquired Lopez from the Pirates in exchange for John Bowker and Joe Martinez after the Buccos had signed him to a minor league deal in the 2009-10 offseason. He's spent the past three-and-a-half years with the Giants, earning a pair of World Series rings and posting a 2.26 ERA with 7.4 K/9 and 3.3 BB/9 in 147 1/3 innings of relief.