The Brewers have a deal in place with righty Luis Perdomo, according to MLB.com’s Jesse Sanchez (via Twitter). It’s a minor-league arrangement.

The 27-year-old Perdomo had been cut loose recently by the Padres. He’s expected to miss all of the upcoming campaign while recovering from Tommy John surgery.

It isn’t clear just yet whether the accord has any special provisions (such as an option) for future seasons. If nothing else, Perdomo will be eligible for arbitration once again at season’s end, so the Brewers could decide to add him to their 40-man roster and tender him a contract if his rehab progresses well.

If he can fully recover from his elbow woes, Perdomo will be looking for a chance to prove that he can deliver consistent results at the MLB level. He has a standout, mid-nineties sinker that reliably produces gaudy groundball numbers, but owns only a 5.19 ERA in his 444 1/3 career frames at the game’s highest level.

Right-hander Luis Perdomo has cleared release waivers and is now a free agent, the Padres announced this afternoon. He was designated for assignment when the team set its roster in advance of the upcoming Rule 5 Draft.

Perdomo, 27, is a former Rule 5 pickup himself. The Padres gave him 146 2/3 frames of work that Rule 5 season even as he was clobbered for a 5.71 ERA, as the team didn’t want to let go of a power sinker with such strong ground-ball tendencies. Things took a turn for the better in 2017 when Perdomo pitched a career-high 163 2/3 innings with a 4.67 ERA, a 4.40 FIP and a whopping 61.9 percent grounder rate out of the San Diego rotation. The Padres moved Perdomo to the bullpen in 2019 and saw him turn in 72 frames of 4.00 ERA/3.60 FIP ball with a diminished but still-strong 52.5 percent ground-ball rate.

Unfortunately for the organization and for Perdomo himself, he wasn’t able to sustain that output in 2020. The righty went down with a forearm injury in September after 17 1/3 ugly innings, and a month later the Padres announced that Perdomo had undergone Tommy John surgery. He’ll miss the entire 2021 season as a result. It’s possible that the Padres bring Perdomo back on a minor league pact with an eye toward getting some value out of him in 2022, but he’ll have the opportunity to see if other clubs have similar interest.

The Padres announced that they have designated right-hander Luis Perdomo for assignment and selected three players – righties Reggie Lawson and Mason Thompson, and infielder Tucupita Marcano.

Perdomo is off the Padres’ roster as they prepare for this winter’s Rule 5 Draft, but he actually first joined the team as a Rule 5 selection from the Rockies before the 2015 campaign. Perdomo has since given the 444 1/3 innings of 5.19 ERA/4.44 FIP ball with 6.74 K/9, 3.26 BB/9 and an excellent 57.3 percent groundball rate. Now, if any team takes on the 27-year-old, it could get him for two seasons of arbitration control.

Thompson is not among the Padres’ top 30 prospects at MLB.com, but the site is high on Marcano, whom it places at No. 8 in the team’s system. The 21-year-old middle infielder “could develop into a serious on-base threat as a bat-first middle infielder,” per MLB.com.

Perdomo spent some time on the injured list in September due to forearm inflammation, though he returned to pitch one more game for San Diego on September 16 before being sent to the team’s alternate training site for most of the remainder of the season, and he didn’t pitch during the Padres’ playoff run.

Acquired via the Rule 5 draft in December 2015, Perdomo has never pitched above the high-A ball level when he made his Major League debut in 2016, though he showed some hints of rotation-level durability and potential during his first two seasons with the Padres.  Unfortunately for Perdomo, shoulder problems set him back in 2018, and he then re-emerged as more or less a full-time reliever in 2019.  He didn’t quite fit the normal relief pitcher model given his knack for generating grounders (57.3% career ground ball rate) rather than strikeouts (career 6.7 K/9), but Perdomo posted a solid 4.00 ERA over 72 frames during the 2019 season.  Between his forearm issue this season and being shuttled back and forth from the alternate training site, however, Perdomo became something of an afterthought for San Diego.

Perdomo will be eligible for arbitration for the second time this winter, and he already looked like a potential non-tender candidate even before his injury.  MLBTR’s Matt Swartz projected (depending on how arbiters view 2020 statistics) a salary range of $1.1MM / $1.2MM / $1.0MM for Perdomo through the arb process.  It isn’t out of the question that the Padres could non-tender Perdomo and then re-sign him to a minor league deal as he rehabilitates, or it’s also possible that Perdomo might have to wait until the 2021-22 offseason before landing his next contract. 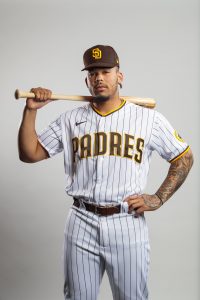 This will be Morejon’s second stint in the big leagues, and there isn’t really anywhere to go but up after he posted a 10.13 ERA through eight innings and five appearances (two of them starts) in 2019.  A bothersome shoulder may have been partially to blame for Morejon’s issues, as he was sent to the injured list last August and was eventually shut down for the season.

Of course, Morejon is hardly the only player to have an underwhelming MLB debut, and the southpaw is still considered one of the sport’s more intriguing pitching prospects.  He has been a staple of top-100 prospects lists for the last few years, with Keith Law (72nd), Baseball Prospectus (75th) and Baseball America (89th) all including Morejon on their pre-2020 rankings.  Morejon was the headliner of the Padres’ spending splurge in the 2016-17 international signing period, as the Cuba native signed for an eye-opening $11MM bonus.

END_OF_DOCUMENT_TOKEN_TO_BE_REPLACED

The Padres announced today that they have selected the contract of Alex Dickerson. He’ll take the active roster spot of righty Luis Perdomo, who was optioned. A 40-man opening was created by moving right-hander Brett Kennedy to the 60-day IL.

Dickerson returns to the majors just before his 29th birthday. He was dropped from the San Diego 40-man roster after the 2018 season but re-signed on a minors pact.

A former third-round pick, Dickerson has more or less always produced when healthy. He consistently drubbed minor-league pitching and turned in a strong .257/.333/.455 slash in his first full look at the majors in 2016.

Unfortunately, that’s the last we had seen of Dickerson in regular-season action. Back and elbow injuries robbed him of two consecutive campaigns.

Dickerson has picked up right where he left off at Triple-A, making this an interesting promotion to watch. Through 104 plate appearances in 2019, he’s slashing .360/.462/.593 with five home runs and a confidence-inspiring 17:13 K/BB ratio.

Here are a few players to hit the disabled list today…