A frugal offseason has given way to a lavish, triumphant spring for the Angels, who no longer have to worry about losing Mike Trout.  The inimitable center fielder is poised to spend his career in Anaheim after inking a decade-long extension last week. 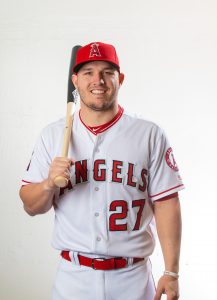 The Angels entered the offseason with only two years of control left over Trout, unquestionably the preeminent player in baseball since he exploded on the scene in 2012. Team success eluded the Angels during the remarkable first seven seasons of Trout’s career, though, as they made the postseason just once (in 2014) and didn’t even win a single playoff game. With that in mind, it would’ve been understandable for Trout to hold off on committing to the Angels for the long haul. On the other hand, it would have been unforgivable for the Halos to not put forth an earnest effort to lock up Trout, who, at 27 years old, is already one of the greatest players in the history of the sport.

To the Angels’ credit, not only did they make an attempt to keep Trout in the fold, but they persuaded him to stay. The 10-year, $360MM extension the Angels gave the seven-time All-Star and two-time MVP stands as the richest contract ever in North American sports, yet the gaudy dollar figure still looks eminently reasonable. The future Hall of Famer is now in line to spend the entirety of his 30s and all of the 2020s in Anaheim, which will give the club plenty of time to capitalize on his presence going forward.

Whether the Angels are in position to take advantage of Trout’s place on their roster this year is in question. Before the Angels locked up Trout, they journeyed through a fairly low-key offseason which included a few modest free-agent signings and no headline-stealing trades. Perhaps if general manager Billy Eppler had his druthers, it would have been a different story. Eppler reportedly targeted a collection of high-profile free agents, including pitchers Patrick Corbin, Nathan Eovaldi, J.A. Happ, Zack Britton, David Robertson, Joakim Soria and catchers Yasmani Grandal and Wilson Ramos, but fell short in each pursuit. Still, the majority of Eppler’s prominent offseason acquisitions came at those positions, as he brought in two starters (Matt Harvey and Trevor Cahill), a battle-tested closer seeking a rebound from a down season (Cody Allen) and an experienced catcher (Jonathan Lucroy). He also procured first baseman Justin Bour, who thrived in Miami as recently as 2017 but saw his production plummet between the Marlins and Phillies last season.

Before adding those five free agents, Eppler oversaw the Angels’ first managerial search since November 1999, when they hired Mike Scioscia. Trout was only eight years old at the outset of the Scioscia era, a run that included 1,650 regular-season wins and the franchise’s sole World Series title (2002). Scioscia, 60, stepped down after last season, paving the way for the Angels to hire another former major league catcher, Brad Ausmus, as their new skipper. Ausmus managed the Tigers to middling results from 2014-17, though the soon-to-be 50-year-old’s amenability toward analytics helped convince the Angels he merited a second chance atop a big league dugout.

The Ausmus-led Angels feature questions aplenty in their pitching staff, in part because of injury issues. Anaheim’s foremost starter, two-way sensation Shohei Ohtani, won’t factor in at all as a pitcher this year after undergoing Tommy John surgery in October. Likewise, J.C. Ramirez is recovering from TJ surgery, having undergone the procedure nearly a year ago, while Andrew Heaney (elbow inflammation) and Nick Tropeano (shoulder discomfort) are also on the shelf.

It’s paramount for Heaney to return sometime soon, as he turned in 180 respectable innings in 2018 and is likely the Ohtani-less Angels’ No. 1 starter. That’s less a compliment to Heaney — who is solid, granted — than an indictment on the Angels, whose current group of healthy starters doesn’t include anything resembling a front-line option. Harvey qualified as an ace during a stretch with the Mets from 2012-15, but the Dark Knight has since logged a 5.39 ERA/4.76 FIP in 340 1/3 innings and undergone thoracic outlet surgery (in 2016). In fairness to Harvey, who turns 30 today, he did post decent numbers with the Reds after they acquired him from the Mets last May. If he can replicate that performance in Anaheim, he’ll justify the investment.

The club spent a bit less on Cahill, another righty with a history of injuries and inconsistency. The 31-year-old was effective in Oakland last season, though (albeit over just 110 innings), and the Angels are banking on a repeat in 2019. Harvey, Cahill, Tyler Skaggs (who has also dealt with his share of injuries, including this spring), Felix Pena, the just-acquired Chris Stratton and the just-optioned Jaime Barria represent the Angels’ top healthy starters at this point.

If you’re underwhelmed by that group, it’s hard to blame you. If you think the Angels should be going after free agent Dallas Keuchel, who’s inexplicably still available, you’d also be within reason. But Eppler insists he’s bullish on the Angels’ present mix of starters, which seems to make a Keuchel signing unlikely, as does a possible lack of financial wiggle room. The Angels have always run high payrolls under owner Arte Moreno, and that’ll be the case again this season, as they’re at upward of $176MM going into Opening Day. Moreno may not want to go significantly higher than that franchise-record sum. Furthermore, adding Keuchel would either push the Angels into luxury-tax territory or leave them within close proximity of that mark, potentially limiting Moreno’s willingness to approve in-season additions on the trade market. The Halos are currently about $21MM shy of the luxury barrier.

While the Angels’ payroll does rank toward the top of the majors, they’re not spending much on their bullpen. The lone expensive reliever on the roster is Allen, the former Indians closer who joined the Angels on an $8.5MM guarantee in the offseason. Allen has been outstanding for the majority of his career, which began in 2012, though the 30-year-old no longer looks like a shoo-in to offer quality production. Not only was Allen subpar last year, when all of his numbers trended downward to concerning degrees, but he has followed that up with a shaky spring in which his velocity has dipped. The Angels will need the light bulb to go on again for Allen once the regular season begins, especially considering their bullpen lost Blake Parker, Jim Johnson and Jose Alvarez during the winter.

Parker, Johnson and Alvarez were among the Angels’ five leading relievers in terms of innings last year, and each managed passable to above-average run prevention numbers. Alvarez was particularly good, yet the Angels traded him to the Phillies for righty Luis Garcia, who “has the characteristics we gravitate to: strikeouts, ground balls and big stuff,” Eppler said after the deal. It’s anyone’s guess how the trade will pan out, but for now, the loss of Alvarez leaves the Angels devoid of a lefty reliever on their 40-man roster. Allen aside, their bullpen is also lacking a righty with a long track record of success, though 2018 acquisition Ty Buttrey may be on the verge of a breakout if the 16 1/3-inning debut he made last season is any indication. As with Keuchel, Anaheim looks like an on-paper fit for free agent Craig Kimbrel, a possible Hall of Fame closer who’s somehow still without a team. Whether Moreno would sign off on a pricey Kimbrel addition is another matter, but the righty would sure help the Angels’ cause.

A Kimbrel signing wouldn’t answer the questions in the Angels’ position player group, where there are several. Trout, Andrelton Simmons and Ohtani are marvelous, and Justin Upton’s a valuable left fielder. Ohtani won’t return until at least May, however, and Upton’s going to the injured list with turf toe, leaving the Angels with just two guaranteed big-time producers in Trout and Simmons.

Potential Upton replacements in the just-selected Peter Bourjos, Jarrett Parker and Cesar Puello don’t inspire confidence, and unproven outfield prospect Michael Hermosillo (hernia surgery) could also open the season on the IL. Elsewhere in the outfield, while Kole Calhoun has been a better-than-average player for most of his career, he was a replacement-level performer last season.

Turning to the infield, third baseman Zack Cozart underwhelmed last season in the opening act of a three-year, $38MM contract. Lucroy has accounted for minus-0.9 fWAR dating back to 2017, while what remains of the once-amazing Albert Pujols totaled minus-2.1 in the same two-year span. Bour was little more than a league-average offensive first baseman in 2018. At second base, David Fletcher wasn’t much of an offensive threat during his 307-PA debut last season, but he starred as a minor league hitter earlier in the campaign and then stood out as a defender in his initial taste of the majors

The Angels still sought some insurance to help protect against another poor Cozart season and a sophomore slump from Fletcher, though, as they reportedly showed interest in Mike Moustakas, Josh Harrison and Troy Tulowitzki in free agency. In the end, they came away with a trade for the 30-year-old Tommy La Stella, who has been a playable bench piece with the Braves and Cubs over almost 1,000 PAs.

Trout and Simmons are something like five three-WAR players condensed into two, which raises the Angels’ floor to a considerable extent. Otherwise, there are so many performance- and injury-related concerns on Anaheim’s roster that it’s hard to consider the team a strong bet to break its four-year playoff drought. The good news is that the Angels could benefit from being in a league which lacks a surefire contender after the favored Red Sox, Yankees, Astros and Indians. The Angels should be part of a several-team jumble fighting for the AL’s last postseason spot, which may only require 80-some wins to secure. The club is entering 2019 off back-to-back seasons of 80 victories, a number PECOTA projects it to match this year.

How would you grade the Angels’ offseason moves?  (Link to poll for Trade Rumors app users.)