The Tigers announced a series of roster moves today, the most exciting of which is the planned MLB debut of acclaimed pitching prospect Matt Manning.  Manning, 23, will start Thursday night in Anaheim against the Angels.  Additionally, pitchers Matthew Boyd and Alex Lange hit the IL, Wily Peralta and Miguel Del Pozo had their contracts selected, and Jeimer Candelario was reinstated from the IL. 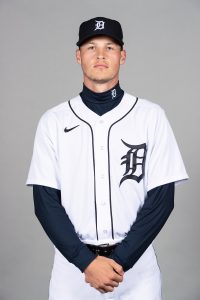 Manning was drafted ninth overall by the Tigers in 2016 out of high school.  Prior to the season, Baseball America ranked Manning as the 33rd-best prospect in the game.  The COVID-19 pandemic deprived Manning and many others of a minor league season in 2020, and he also dealt with a right forearm strain.   Manning made his Triple-A debut on May 4th of this year.  He’s scuffled to an 8.07 ERA in seven starts, with more than 27% of his flyballs leaving the yard.  Still, Manning’s last outing was solid, and he retains “frontline starter potential” according to Baseball America.  He’ll get a tough assignment, going up against Shohei Ohtani.

Boyd, 30, exited Monday’s start due to an arm injury that Tigers manager A.J. Hinch described today as “more toward the elbow.”  Through 13 starts, he was experiencing a resurgent season with a 3.44 ERA in 70 2/3 frames.  With a strikeout rate of just 18.8%, Boyd is likely still a 4.50 ERA type pitcher whose flyballs happened to stay in the yard over a brief sample.  Still, he’s under team control through 2022 as an arbitration eligible player and should be a solid late July trade candidate if the injury turns out to be minor.  Boyd joins rotation-mate Spencer Turnbull on the IL.

Lange, a 25-year-old rookie reliever, struggled to the tune of a 7.31 ERA over 18 fairly low-leverage outings before hitting the IL with a shoulder strain.  He was rated as a 40-grade prospect by Baseball America prior to the season.

Peralta and Del Pozo will be new additions to the Tigers’ 40-man roster.  One such spot was opened with the transferring of Rony Garcia to the 60-day IL.  Peralta, 32, joined the Tigers on a minor league deal back in February.  He was once a productive member of the Brewers’ rotation, peaking with a 3.53 ERA in 198 2/3 innings back in 2014.  He managed to give the Mud Hens six mostly solid but brief outings and is an option to take Boyd’s spot Saturday in Anaheim, Hinch told reporters.

Del Pozo has 13 big league innings to his name.  The 28-year-old southpaw inked a minor league deal with the Tigers back in January.  He’s been dominant in a dozen Triple-A relief outings, punching out 34.7% of batters faced and walking only 6.1%.

3:12PM: Detroit manager A.J. Hinch said that Fulmer would indeed be taking Teheran’s rotation spot, and that it seems like Teheran will miss significant time on the injured list.  (MLive.com’s Evan Woodbery was among those to report the news.)

11:51AM: The Tigers announced that righty Julio Teheran has been placed on the 10-day IL (retroactive to April 7) with a right shoulder strain.  Right-hander Alex Lange has been called up from the team’s taxi squad and is set to make his first Major League appearance.

Teheran was scheduled to start last night’s game against the Indians but developed tightness in his right triceps while warming up in the bullpen during the top of the first inning, leading to a very late scratch.  With Teheran’s injury now defined as a shoulder strain, it isn’t a good sign for a pitcher who has been very durable over his 11 Major League seasons.

After a rough 2020 with the Angels, Teheran signed a minor league deal with Detroit that became guaranteed (at a $3MM salary) once the Tigers added the veteran right-hander to their Opening Day roster.  His first start on April 3 was a successful one, as Teheran tossed five innings of one-run ball and picked up the win in the Tigers’ 5-2 victory over Cleveland.

Michael Fulmer now seems like the logical candidate to take Teheran’s spot in the rotation.  The 2016 AL Rookie Of The Year began the season as something of a swingman reliever as Fulmer continues to try and rebuild his career after multiple arm injuries.  Tommy John surgery shelved Fulmer for all of 2019, and he posted an 8.78 ERA over 27 2/3 innings in 2020.

Lange has spent much of his minor league career as a starter, but the Tigers have deployed him as a reliever since acquiring him from the Cubs as part of the Nick Castellanos trade in July 2019.  Lange was selected 30th overall by the Cubs in the 2017 draft, and the 25-year-old righty has a 4.54 ERA over 232 minor league innings.  He’ll be making the jump to the big leagues without any Triple-A experience, though Lange did pitch at Detroit’s alternate training site last season in lieu of any minor league ball.  MLB Pipeline ranks Lange 29th in their list of the Tigers’ top-30 prospects, with a couple of plus pitches — a 60-grade curveball, and a 55-grade fastball that hit the 97mph plateau this year at Spring Training.

The Tigers announced that they’ve selected the contracts of right-handers Matt Manning, Alex Faedo, Alex Lange and left-hander Joey Wentz in advance of tonight’s deadline to protect players from the 2020 Rule 5 Draft.

All four players were top 40 picks in their respective draft classes — Manning and Wentz in 2016, Faedo and Lange in 2017. Manning went ninth overall to the Tigers back in ’16 and stands out not only as one of the organization’s best prospects but one of the best prospects in all of baseball. He checks in at No. 15 on Baseball America’s Top 100 list, No. 18 at FanGraphs and No. 20 at MLB.com.

There was some thought that the 22-year-old Manning might even make his Major League debut for the Tigers in 2020, although that didn’t come to pass. He spent the 2019 season with Detroit’s Double-A affiliate in Erie, where he pitched to a 2.56 ERA with 10.0 K/9 against 2.6 BB/9 through 133 2/3 frames and is viewed as a potential top-of-the-rotation piece alongside fellow top prospect Casey Mize.

Both the 25-year-old Faedo and the 23-year-old Wentz factor prominently into the organization’s prospect rankings, though neither is thought to have the same ceiling as that of Manning, Mize or southpaw Tarik Skubal. Still, both are viewed as near-MLB prospects who could fill spots in the middle or back of a rotation. Wentz, acquired from the Braves in the trade that sent Shane Greene from Detroit to Atlanta, will be further off by virtue of the fact that he is on the mend from 2020 Tommy John surgery.

The Tigers picked up Lange, 25, in the trade that sent Nick Castellanos to the Cubs back in 2019. He’s a bit further off than Faedo despite being the same age, as he has just 54 2/3 frames at the Double-A level under his belt and has shown some control issues while pitching there. Still, it’s conceivable that any of Manning, Faedo or Lange could make their big league debuts next season, depending on their progress in the upper minors and on the state of the Detroit rotation. This quartet, paired with the aforementioned Mize, Skubal and righty Franklin Perez, represents but a portion of the deep reservoir of talented young arms the Tigers have stockpiled to this point in their rebuilding efforts.

The flurry of trades leading up to the deadline created some vacancies in teams’ player pools, and we’ve continued to see a few clubs add prospects to their ranks even in the days since the deadline as they look to get said players some vital developmental reps late in the season. Here’s a look at some of the latest additions around the league…

The Tigers have added right-handers Alex Lange and Zack Hess to their 60-man player pool, per a team announcement. The club’s pool is now at capacity, Cody Stavenhagen of The Athletic points out.

Lange was a first-round pick (No. 30 overall) of the Cubs in 2017, but they traded him to the Tigers last year in the teams’ Nick Castellanos deal. Between the Cubs’ and Tigers’ Double-A clubs last season, the 24-year-old Lange managed a 3.79 ERA with 7.1 K/9 and 4.4 BB/9 over 54 2/3 innings. FanGraphs ranked him as the Tigers’ No. 15 prospect back in January, writing that he “might fit in a multi-inning relief role.”

FG also pegs Hess as a likely reliever, and the site placed him 15th in its most recent assessment of Detroit’s farm system. The hard-throwing 23-year-old joined the organization as a seventh-round pick in 2019, and almost all of his professional innings have come in Single-A ball so far. He threw 21 frames there last season and recorded a 2.57 ERA with 9.43 K/9 and 4.71 BB/9.

Thirtieth overall draft pick Alex Lange has agreed to a $1.925MM bonus to join the Cubs, per Jon Heyman of Fan Rag (Twitter links). Whether the sides would find common ground came into question today due to as-yet-unreported medical concerns.

Evidently, the health issues weren’t enough to scuttle the deal, though Lange will take home less than the slot value of $2,184,300. The righty had the option of spending another year at LSU, but that’d have left him facing another year of injury risk with little in the way of anticipated leverage for next year’s draft.

Sixth-round pick Jeremiah Estrada will take home a well-over-slot $1MM bonus, Callis tweets. That bonus level wouldn’t have been possible absent agreement with Lange, Callis notes, unless Chicago was willing to give up a first-round pick next year as a penalty. The Cubs also landed fifth-rounder Nelson Velazquez, Callis tweets. His status had been uncertain as well with the signing deadline looming.

An issue with No. 30 overall draft pick Alex Lange’s physical has thrown a wrench into negotiations, reports FanRag’s Robert Murray. The two sides are still talking about a deal that’d come in under the slot value of $2,184,300, but it’s possible that the righty could return to Louisiana State University for his senior season as well, tweets FanRag’s Jon Heyman. The Cubs and Lange’s camp will have until 5:00pm to work out a deal.

The hard-throwing Lange ranked 23rd among draft prospects, per Jim Callis and Jonathan Mayo of MLB.com, but concerns about an eventual move to the bullpen had him further down other boards. Baseball America pegged him 34th, while Fangraphs had him 39th and ESPN listed him 45th. Chicago has already agreed to terms with its top pick, No. 27 overall selection Brendon Little. Lange, meanwhile, was selected with the compensatory pick they received when Dexter Fowler signed in St. Louis.

If the Cubs are unable to sign Lange, they’ll lose the $2.184MM value of his slot from their bonus pool, so the funds won’t be able to be redirected elsewhere. However, they’d also be entitled to a comp pick in next year’s draft, assuming they ultimately do make him an offer worth a certain percentage of the slot’s value. Lange and Reds top pick Hunter Greene (No. 2 overall) are the top picks that remain unsigned.