The 36-year-old Simon had three successful seasons with the Reds from 2012 through 2014, but struggled in 2015 after heading to Detroit for Eugenio Suarez and a prospect, and was even worse after returning to Cincinnati last season. Simon finished 2016 with a 9.36 ERA, 6.0 K/9 and 4.8 BB/9 over 58 2/3 innings mostly spent in the Reds’ rotation, then had arthroscopic shoulder surgery.

Simon was eligible for free agency last offseason but did not sign, which perhaps isn’t surprising given his 2016 struggles and injury issues. Simon also seemingly has personal baggage — he was accused but ultimately acquitted of involuntary manslaughter in the Dominican Republic in 2011 and settled a civil suit over sexual assault allegations in 2015, although these issues did not seem to have much effect on his ability to find employment before his performance nosedived.

Simon will presumably try to use his stint with the Ducks as a possible springboard to a return to the big leagues. He’ll join a Ducks roster that currently includes former Major Leaguers like Jordan Pacheco, Lew Ford, Marc Krauss, Eury De La Rosa and Chin-hui Tsao, among others.

Since the Pirates acquired Ivan Nova from the Yankees prior to the Aug. 1 non-waiver trade deadline, the right-hander has unexpectedly performed like a top-of-the-rotation starter. In seven starts and 46 1/3 innings with the Bucs, Nova has recorded a 2.54 ERA while tossing two complete games and amassing 32 strikeouts against a paltry two walks. Part of the reason for Nova’s success is the Pirates’ stadium, PNC Park, he told Travis Sawchik of the Pittsburgh Tribune-Review. “It’s not like pitching in Baltimore or Boston, Toronto, where the ball flies, or New York. A fly ball, (and) it’s a homer,” said Nova, whose new venue has the largest left field in the majors, per Sawchik. Yankee Stadium, on the other hand, has the league’s shallowest right field and is among its most home run-friendly venues. The change in parks has been timely for Nova, a free agent-to-be who is likely pitching his way to an appreciable raise over his current salary of $4.1MM.

Before he signed on with the Reds, righty Alfredo Simon drew interest from some other organizations — which helps explains why Cincinnati ultimately gave him a guaranteed $2MM contract. Simon says that the Blue Jays were one team with interest, as MLB.com’s Mark Sheldon tweets. And the Marlins also reached out, according to Barry Jackson of the Miami Herald, though the club wasn’t willing to promise that kind of money to the veteran.

Here’s more on some market situations around the game:

1:15pm: MLB.com’s Mark Sheldon reports that Simon receives a $2MM base salary on the deal and can take home another $1.5MM worth of incentives (Twitter link).

11:01am: The Reds and right-hander Alfredo Simon are in agreement on a Major League contract, reports Ken Rosenthal of FOX Sports (via Twitter). The MVP Sports client will return to the Reds, where he pitched from 2012-14 before being traded to the Tigers in exchange for Eugenio Suarez and minor league righty Jonathon Crawford. 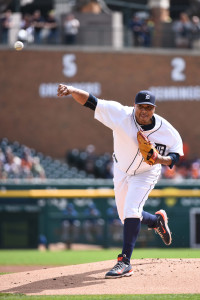 Simon, 35 in May, tallied 345 innings and a 3.16 ERA in his three years with the Reds, averaging 6.3 strikeouts and 2.7 walks per nine innings pitched to go along with a 48.5 percent ground-ball rate. Simon spent the first two years of his Reds tenure in the bullpen, but he made the jump to the rotation in 2014 and yielded better results than perhaps even the most optimistic expectations could’ve predicted. Simon made the first All-Star team of his career at the age of 33 that season, pitching to a 3.44 ERA in 196 2/3 innings. The outstanding work was enough to pique the Tigers’ trade interest and convince Detroit to cede a pair of intriguing young players for the final year of Simon’s club control.

Simon’s excellent season in ’14, though, looked to be largely smoke and mirrors, even at the time. The veteran benefited greatly from a minuscule .232 BABIP and 85 percent strand rate in the first half — neither of which appeared to make his 2.70 first-half ERA sustainable. That production did indeed prove too much to maintain, as Simon’s BABIP regressed to .309 in the second half, and his ERA after the break was a more pedestrian 4.52.

None of that, however, is to say that Simon can’t provide on-field value to the Reds’ pitching staff in 2016. (His off-field history, on the other hand, is a separate and lengthy issue.) The right-hander struggled to a 5.05 ERA with the Tigers last season, but that was partly due to a dip in strikeout rate and an increased walk rate. A move back to the NL could aid both of those factors, and despite the lackluster ERA, it has to be noted that Simon still racked up 187 innings in the Detroit rotation in what was another healthy year in the rotation. Making roughly 30 starts and delivering an ERA in the low- to mid-4.00 range would still be a boost to an uncertain Reds staff.

Indeed, Cincinnati has upside but also plenty of question marks beyond right-handers Anthony DeSclafani and Raisel Iglesias, so there’s certainly cause to add some depth in the form of Simon. While the club has a number of interesting young arms — Robert Stephenson, Brandon Finnegan, John Lamb, Michael Lorenzen and Cody Reed, to name a few — it’s difficult to rely on such an unproven mix to round out the rotation. That’s especially true in light of a UCL sprain for Lorenzen and a delayed start to the year for Lamb, who is recovering from offseason back surgery. The Reds, of course, also have veteran Homer Bailey on the mend from Tommy John surgery, but he figures to miss at least a couple of months this season as he works his way back, so there’s no telling exactly how many innings the club can receive from him.

Simon’s late start might mean that he won’t quite be ready to step into the Opening Day rotation, but even if that’s the case, it’s easy enough to see him jumping into the starting mix by the middle of next month and providing a stabilizing presence to an otherwise youthful staff. The Reds needn’t make a 40-man roster move to accommodate the addition of Simon, as that roster will stand at just 39 players, even after Simon’s return is finalized.

JAN. 21: In addition to the names mentioned yesterday, right-hander Kyle Lohse is also a consideration for the Marlins, Heyman tweets. The 37-year-old Lohse’s name has scarcely been mentioned this winter, as the veteran struggled through one of the worst seasons of his career in 2015, posting a 5.85 ERA in 152 1/3 innings. Lohse displayed solid (albeit somewhat diminished) control and didn’t see any sort of dip in velocity, but he was plagued by a decreased strand rate and spikes in his homer-to-flyball rate and BABIP.

JAN. 20: The Marlins still have interest in adding a veteran starter, as Jon Heyman notes on Twitter and Barry Jackson of the Miami Herald reported this morning. Doug Fister and Alfredo Simon are possible names under consideration, as are rehabbing hurlers Cliff Lee and Tim Lincecum.

Certainly, those pitchers represent two of the most accomplished veteran bounceback candidates who remain on the market. Fister and Mat Latos have long been considered the class of the rebound hopefuls, but it seems safe to say the latter won’t be coming back to Miami after his brief run there in 2015.

We haven’t heard much on Simon this winter, but Fister is said to be seeking a two-year deal in the $22MM range. Drawing either pitcher will likely require not only some guaranteed money, but also an appealing opportunity.

It’s not clear how far the Fish will extend themselves to bring in another option, and Jackson suggests that the ballclub is looking for a low-cost investment. If that doesn’t happen, he says, then the organization is prepared to move on with what it has.

That makes sense, as Miami has already added a veteran pitcher in Edwin Jackson who’s had success in the past but needed an opportunity in the present. Obviously, the signing of Wei-Yin Chen went a long way toward shoring up the top of the staff. And the team still has a solid inventory of internal depth options.

Manager Brad Ausmus says he thinks GM Al Avila will try to acquire a closer this winter, MLive.com’s Chris Iott writes. “I would think we would,” says Ausmus. “That would definitely be high on the priority list. It’s a lot easier to say it’s high on the priority list. It’s a lot harder to do.” The Tigers traded Joakim Soria to the Pirates earlier this season and have tried a variety of other pitchers at closer, without much success. Their bullpen has been a significant problem all season, posting a 4.41 ERA that ranks fourth-worst in the big leagues. Here’s more out of Detroit.

Jason Heyward’s well-rounded game might best be appreciated by the “data-driven organization” that has watched him all season, Derrick Goold of the St. Louis Post-Dispatch writes.  This might be why the Cardinals could go into team-record contract territory to re-sign Heyward this winter, and the club is indeed interested in bringing him back “though they recognize it might take another team (or more) to help frame negotiations.”  Goold writes that the Cards are open to the idea of including an opt-out clause in Heyward’s deal, which would allow the 26-year-old to potentially return to the open market in four or five seasons and score another big contract.

Reds outfielder Jay Bruce is as “as good a bet as anyone” on the team to be dealt, team sources tell Ken Rosenthal of FOX Sports. That is rather a notable viewpoint given the club’s nice collection of even shorter-term assets. Bruce, 28, is controllable for three more years (the last via option), though Rosenthal adds that he rebuffed two offers of a second extension last year. It’s hard to gauge Bruce’s trade value given his rough 2014 and slow start to this season, but he’s bounced back nicely of late. Bruce is neither old nor expensive, offers an established power bat, and has at times graded rather well on defense and on the basepaths.

The Mets appear to be keeping tabs on Brewers third baseman Aramis Ramirez and shortstop Jean Segura, reports Ken Rosenthal of FOX Sports in his latest video. Of the two, Ramirez is the more practical target for New York. He is expected to retire after the season and does not have a no-trade clause. The Mets are also interested in Ben Zobrist, but they believe other teams will outbid them.

4:04pm: The club has announced that it has a one-year deal in place with J.D. Martinez, too, leaving only Al Alburquerque among Tigers arb eligibles. Financial terms remain unknown.

1:28pm: Alfredo Simon has also avoided arbitration with Detroit, settling on a $5.55MM salary for 2015 — his final year of team control — according to Mike Perchick of WAPT (Twitter link). He’d been projected at $5.1MM.

12:04pm: The Tigers and left-hander David Price have avoided arbitration by agreeing to a whopping $19.75MM salary for the ace’s final year of team control, tweets Jon Heyman of CBS Sports. Price’s salary tops the $18.9MM projection of MLBTR contributor Matt Swartz by about $900K.

Price’s salary is a record-breaker for a starting pitcher in arbitration, topping the mark set just last winter by his now-former teammate Max Scherzer, who earned a $15.25MM sum. The former No. 1 overall pick split the season between the Rays and Detroit following a last-minute three-team trade on the day of the trade deadline, in which Nick Franklin, Drew Smyly and Willy Adames went to the Rays, with Price heading to the Tigers and Austin Jackson going to the Mariners. In total, Price put together another dominant season, compiling a 3.26 ERA while leading the league in innings pitched (248 1/3) and strikeouts (271).