The Astros made right-handed ace Gerrit Cole a late scratch from his start against the White Sox on Tuesday because of right hamstring discomfort, Jake Kaplan of The Athletic was among those to report. The severity of the injury isn’t known, but it’s worth keeping an eye on considering Cole’s importance to the Astros and his status as the game’s best pending free agent. As of now, the 28-year-old workhorse is on pace for his third consecutive 200-inning season. He has given Houston 156 2/3 frames of 2.87 ERA/3.11 FIP ball with 12.98 K/9 and 2.24 BB/9 in 2019.

The Rays are set to welcome back a pair of infielders in the coming days. Rays manager Kevin Cash told Juan Toribio of MLB.com that third baseman Matt Duffy is poised to come off the injured list in next week’s series against Boston, perhaps as soon as tomorrow. Not far behind, it seems, is utilityman Daniel Robertson, who will kick off a minor-league rehab assignment in the High-A Florida State League tomorrow, tweets Marc Topkin of the Tampa Bay Times.

This will mark Duffy’s season debut, as he’s been sidelined by a hamstring strain from the outset. The 28-year-old was Tampa’s preferred option at the hot corner in 2018. Despite hitting only four home runs and slugging .366, Duffy was worth a solid-average 2.4 fWAR on the strength of a high-contact approach and plus metrics at the hot corner (at least in the eyes of UZR). Over four MLB seasons, Duffy sports a career .285/.337/.385 slash (102 wRC+) with above-average defense at third base.

Robertson, who has been out since June 22 with right knee inflammation, was even better than Duffy in 2018, although his offensive output has cratered this season. As a part-time player last year, the former A’s prospect slashed .262/.382/.415 while logging time at all three infield positions. His batted ball metrics never quite backed up that level of production, but the Rays likely still anticipated at least average output at the plate from the 25 year-old moving forward.

Instead, his power has cratered, partially because his already-high ground ball rate has jumped six points from last season. The result: a .202/.311/.281 slash, translating to a 68 wRC+. Nevertheless, there’s room for some optimism about a return to form. Robertson’s elite plate discipline seems to be intact, he’s actually making more contact than last season despite a curious uptick in strikeouts, and his average exit velocity, per Statcast, hasn’t changed.

Things are a little less fortunate for AL Rookie of the Year candidate Brandon Lowe. Topkin tweets that Lowe’s bruised right shin, sustained when he fouled a ball off his leg, continues to impede his lateral quickness on fielding drills, meaning “it will still be awhile before he’s back,” as Topkin puts it. This is the second time in a week we’ve heard frustration with the 25-year-old’s recovery process. The Rays, who have lost five straight and now sit two games back in the AL Wild Card race, could certainly use Lowe in the lineup, as the second baseman sports a strong .276/.339/.523 slash.

In the interim, Lowe’s injury likely means more playing time for Duffy, who seems to have been squeezed out at third base by the club’s offseason acquisition of Yandy Diaz, and hot-hitting rookie Michael Brousseau. Joey Wendle has continued to log action at the keystone in Lowe’s absence, as well, but he’s come nowhere close to repeating his solid 2018 production and could see his playing time dwindle as the club’s infield mix gets increasingly crowded.

The Mets’ struggles have mounted to the point that their general manager acknowledges having “low expectations” for the season’s second half. Despite the organization’s dumpster fire start, their young flamethrower has no hope of going elsewhere. “I love being a Met,” Noah Syndergaard told reporters, including Tim Healey of Newsday. “If something were to ever change, it’d be definitely bittersweet just because of New York City itself, the fan base and just the guys in this clubhouse have a special place in my heart.” As MLBTR’s Jeff Todd explored yesterday in a ranking of the top 60 trade candidates, the time might not be optimal to move Thor, who comes with two additional years of team control and is currently amidst a career-worst, albeit still more than adequate, season.

As we await the Mets’ next move, let’s check in on some injury notes from the East divisions:

The Rays announced Wednesday that they’ve placed second baseman Brandon Lowe on the 10-day injured list due to a right shin contusion. Lowe, who was only recently named a All-Star replacement, fouled a ball off his shin Tuesday but remained in the game after talking things over with a trainer. Upon singling to left field with a shift-beating grounder, however, he was unable to run down the line and instead limped his way to first base. He exited the game thereafter. First baseman Nate Lowe is up from Triple-A Durham to take his roster spot. Tampa Bay also optioned righty Austin Pruitt to Durham and recalled fellow righty Jake Faria.

Lowe’s placement on the IL is retroactive to July 3, so he’ll be eligible to return to the club next Saturday for a doubleheader against the Orioles. That said, there’s no immediate timetable placed on his return, so it’s possible he’ll require a bit more than the minimum stay on the shelf. His injury initially looked remarkably similar to that of injured All-Star Tommy La Stella, who’ll miss up to 10 weeks with a fracture, so the Rays surely feel fortunate to have dodged that type of blow.

With Lowe on the injured list, the American League once again had an opening on the All-Star roster. Yankees shortstop Gleyber Torres has been named to the All-Star team in place of Lowe, per a league announcement.

TODAY: Tampa Bay has announced the deal. It could top out at $49MM in total value if both options are exercised and all incentives are reached, Marc Topkin of the Tampa Bay Times reported.

YESTERDAY: The Rays have agreed to a six-year, $24MM contract extension with infielder/outfielder Brandon Lowe, reports Ken Rosenthal of The Athletic (via Twitter). The contract contains a pair of club options that would buy out a pair of would-be free-agent seasons as well. Lowe is a client of the Bledsoe Agency. 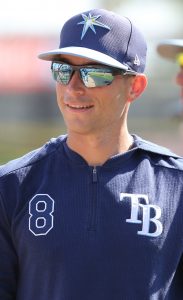 Lowe has just 43 games of Major League experience under his belt but is widely regarded as one of the Rays’ most promising prospects. Baseball America rated him as the game’s No. 93 prospect this offseason, while Eric Longenhagen and Kiley McDaniel of Fangraphs ranked him 46th overall.

The early returns on Lowe in the Major Leagues were relatively promising. The 2015 third-rounder reached the Majors for the first time at the age of 23 and batted .233/.324/.450 with six home runs, six doubles, a pair of triples and two stolen bases (in three attempts). Context-neutral metrics like OPS+ (112) and wRC+ (113) felt his bat was 12 to 13 percent better than that of a league-average hitter when adjusting for league and home park.

Lowe’s 25.6 strikeout rate was likely a bit higher than the Rays would prefer, but he showed power and drew walks at a 10.8 percent clip in his first crack at MLB opposition. That production came on the heels of a sensational .297/.391/.558 slash between Double-A and Triple-A, creating further optimism that Lowe can be an integral part of the Rays moving forward.

Defensively, Lowe has spent the bulk of his career as a second baseman, though he got his feet wet with more than 500 innings of work in the outfield corners last season (between the Majors and minors). Scouting reports have generally projected him as a potentially average defender at second, though he’s considered to be more of a bat-first player.

It’s unusual but not unheard of for teams to lock up players with such minimal MLB experience, and the Rays in particular have done so in past years with both Evan Longoria and Matt Moore. Lowe’s deal will line up identically to the Phillies’ six-year, $24MM deal with Scott Kingery — a contract signed before Kingery even played an MLB game.

There’s certainly risk to committing to a player so early in his professional career, but the $24MM risk is one all the more worth taking for a low-payroll club like the Rays that typically has a great deal of difficulty hanging onto quality players as their arbitration earnings increase. For Lowe, he could potentially have earned more over the course of his three arb seasons — and the option years are sure to be at an affordable rate — but the allure of locking in a sizable guaranteed payday when his first arbitration season is still three years away is understandable. If both of the club options on the deal are ultimately exercised, he’ll reach free agency a few months after his 32nd birthday.

Lowe now joins Kevin Kiermaier as the only Rays players to be guaranteed anything beyond the 2020 season. Charlie Morton, set to earn $15MM in both 2019 and 2020, is the only other player whose contract for the 2020 season is guaranteed at the moment. Of course, given the Rays’ wealth of young talent, it’s quite likely that they’ll explore further extension possibilities between now and Opening Day.

The Rays have officially promoted infielder Brandon Lowe to the major league roster, as Marc Topkin of the Tampa Bay Times was first to report. Daniel Robertson has been placed on the DL to accommodate.

The 24-year-old Lowe is a homegrown product, having been selected by the Rays in the third round of 2015’s amateur draft. He’s dominated at every level of the minors since joining the organization, most recently posting a commanding .304/.380/.613 batting line at Triple-A with 14 homers in just 205 plate appearances. And while his 22.9% strikeout rate at that level is a bit high, it’s far from the levels of some of the power threats in today’s game. Overall, his performance was good for a 177 wRC+.

Baseball America ranked Lowe as the 16th-best prospect in a deep Rays farm system prior to the 2018 season, touting his above-average bat speed and penchant for being aggressive on pitches in the strike zone. At the midpoint of the season, MLB Pipeline has Lowe all the way up to ninth in the Tampa Bay organization. The publication raved about his hitting ability and “consistent pop to the gaps” with sneaky raw power and loads of patience. His ceiling will be limited by the likelihood that he becomes a solid yet unspectacular defender at second base.