After 13 seasons in the Major Leagues and 18 years in professional baseball, right-hander Jake Westbrook has decided to retire, he said today in an interview with Rob Rains of STLSportsPage.com. Westbrook says he is looking forward to spending time with his four children and wife Heather:

"I’m excited about the next part of my life and that’s being home with the kids and my wife Heather and spending time with them and going to all of the things I haven’t had a chance to do over the last 18 years in the spring and summertime. Being home is going to be fun."

Westbrook tells Rains that he entered the season preparing to pitch another season but was only 50-50 on whether or not he would actually follow through on that plan. "The interest that I was getting wasn’t significant enough for me to go through the grind of another year and be away from my family," Westbrook said.

Originally selected by the Rockies with the 21st overall pick in the 1996 draft, Westbrook signed with Colorado out of high school but didn't make his big league debut until 2000 with the Yankees. The Rockies traded him to the Expos, who flipped him to the Bombers in a trade that netted Hideki Irabu. Westbrook would appear in just three games with the Yankees before being traded to the Indians, with whom he would spend the next nine seasons of his career.

A 2010 trade to the Cardinals in a three-team deal also involving the Padres propelled Westbrook to a World Series Championship in 2011, which he called the best thing to happen to him in baseball:

"…getting traded to the Cardinals was probably the best thing that happened in my career. It’s such a storied organization and the atmosphere I witnessed there, and being in the playoffs all those years. Getting a chance to pitch in the World Series and winning game six in 2011 was pretty special and something I will always have."

Westbrook's career will come to a close with a 105-103 record, a 4.32 ERA, 965 strikeouts and 571 walks in 1747 2/3 innings at the big league level. Among 147 pitchers to have thrown 1000 innings since 2002, Westbrook (and his sinker) produced a 58.7 percent ground-ball rate that trails only Brandon Webb and Derek Lowe in that time. The 36-year-old has earned more than $71MM in his career (including his signing bonus out of the draft). We at MLBTR extend our best wishes to Westbrook and his family in his post-baseball life.

Of all the baseball news that broke in 2013, the story of how David Murphy's contract with the Indians became public has to be the most unique.  Paul Hoynes of the Cleveland Plain Dealer relates how Murphy and the Tribe had agreed to terms but were keeping the deal under wraps until it was finalized…only to have Murphy's five-year-old daughter spill the beans to her kindergarten class during a lesson about Thanksgiving.  “She was in preschool and they were learning about Pilgrims and Indians,” Murphy told reporters last month. “She spoke up that her dad was going to the Indians. Obviously, the word spreads quickly because of social media. It’s not the best situation, but it’s a good story to tell her when she gets older.”

Here's some more Tribe-related notes from Hoynes, as part of a reader mailbag…

The Cardinals have declined their half of the $9.5MM mutual option on Jake Westbrook's contract, according to Derrick Goold of the St. Louis Post-Dispatch (on Twitter). Westbrook will be paid a $1MM buyout.

The 36-year-old Westbrook posted a 4.63 ERA in 116 2/3 innings for the Cards this season, maintaining a strong ground-ball rate (56.3 percent) as has come to be expected of the veteran. However, his already low strikeout rate dropped, and he wound up posting a career-worst 44-to-50 K/BB ratio. The writing was on the wall for Westbrook, as he was left off the team's postseason roster.

Typically very durable, Westbrook also saw a pair of stints on the 15-day disabled list in 2013, missing a month with elbow inflammation and another two weeks with a strained lower back. Westbrook may be able to find a Major League deal this offseason in free agency based on his track record, but the two DL stints and the fact that he walked more batters than he struck out in 2013 would mean his guarantee would be just a fraction of this season's $8.75MM salary.

The Cardinals are well-equipped to move on from Westbrook, with Adam Wainwright, Michael Wacha, Shelby Miller, Lance Lynn, Joe Kelly and Jaime Garcia all present as internal options for the starting rotation.

Hall of Fame and Cardinal icon Stan Musial passed away yesterday at the age of 92. Today, tributes are pouring in ranging from fans outside the Stan the Man statue at Busch Stadium (St. Louis Post-Dispatch video) to the White House (h/t MLB.com's Jenifer Langosch). Daniel Solzman of Redbirdrants.com even suggests the Cardinals name the playing field at Busch Stadium in honor of Musial. The Cardinals are holding their 17th annual fanfest this weekend and, while the Musial official memorabilia booth was closed today in tribute to the St. Louis legend, players still made their appearances and made some news.

The Nationals and Cardinals began their NLDS today, 79 years to the day of the last playoff game for a Washington franchise. The series will also feature the largest age gap between two managers facing off in the post-season (27 years and 235 days between 69-year-old Davey Johnson of the Nationals and 42-year-old Mike Matheny of the Cardinals), according to the Elias Sports Bureau via a tweet by ESPN.com's Jayson Stark. Other notes and nuggets from the Senior Circuit:

The first Sunday of the new NFL season has not gone unnoticed by MLB players. The Cubs are celebrating by wearing a NFL jersey of their choice on their flight from Pittsburgh to Houston tonight, reports Doug Padilla of ESPNChicago.com. But, like their season, the idea wasn't without its pitfalls. While Floridian Anthony Rizzo (Dolphins), Baltimore native Steve Clevenger (Ravens), and Virginian Shawn Camp (Redskins) came prepared, others were left to the mercy of jersey shopping in Pittsburgh. So, newly acquired Jason Berken, a Packers season-ticker holder, had to settle for a Steelers jersey. Enough of the gridiron and back to the diamond: 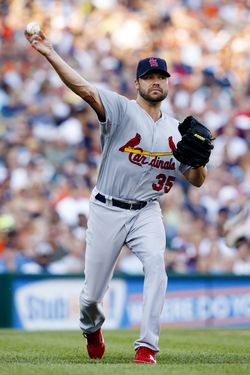 Cardinals righty Jake Westbrook "fully intends on exercising his half of mutual option for '13" after the season, tweets Joe Strauss of the St. Louis Post-Dispatch, but the pitcher has no idea what the Cardinals will do.  Westbrook's contract, signed in November of 2010, includes an $8.5MM mutual option for 2013 with a $1MM buyout if the club declines and no buyout if the player declines.

The baseball world figures to remain relatively quietly until after the New Year, but as Jon Paul Morosi of FOX Sports writes, there is still a lot of work to be done before the season begins. Let's round up Morosi's rumors…