The Reds announced a three-year extension with lefty reliever Sean Marshall, which runs through 2015.  The contract is worth $16.5MM, tweets Ken Rosenthal of FOX Sports.  Rosenthal notes there's $2MM in performance bonuses each year, $1MM for games started and $1MM for games finished.  The 29-year-old has yet to throw a pitch for his new team, having been acquired from the Cubs in a December trade.  Marshall, a client of Meister Sports Management, was already under control through 2012 due to a previous two-year deal. 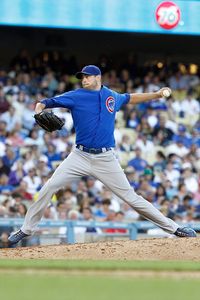 With the new contract, Reds GM Walt Jocketty prevents one of the game's best relievers from reaching free agency after the season.  Since converting to relief full-time in 2010, the lanky southpaw owns a 2.45 ERA, 10.1 K/9, and 2.5 BB/9 over 150 1/3 innings, allowing just four home runs in that span.  Marshall's $16.5MM contract does not represent a discount, matching the high bar set for non-closing relievers by Joaquin Benoit, who signed as a free agent with the Tigers in November 2010.

As MLBTR's extension tracker shows, in recent times five other non-closer relievers have signed extensions heading into contract years: Ryan Madson of the Phillies, Rafael Soriano of the Braves, Dan Wheeler of the Rays, Matt Belisle of the Rockies, and Casey Janssen of the Blue Jays.  That's not to say Marshall won't end up closing if Madson departs the Reds after the season; we'll be monitoring the situation on Twitter @closernews.

For a look at the remaining relievers in the 2012-13 free agent class, check out our list here.

MONDAY, 10:09am: Fay says Marshall will talk about the extension later today.  For now, the lefty commented, "I can't say anything. But I'm very happy."

SUNDAY, 2:11pm: John Fay of the Cincinnati Enquirer tweets that GM Walt Jocketty also confirmed a deal is close and that the two sides want it done before games start.

MLB.com's Mark Sheldon adds that Jocketty says the deal could be done soon:

“We are talking to him,” Reds general manager Walt Jocketty said on Sunday. “It could be done soon. When we traded for him, it was also looking to sign him for the long term.”

11:49am: Marshall confirmed the report, saying that a deal could be worked out by tomorrow, tweets John Fay of the Cincinnati Enquirer (via Twitter).

11:16am: The Reds and Sean Marshall are making progress on a multiyear extension and a deal could be announced early this week, sources tell Jon Paul Morosi of FOX Sports (via Twitter).  The left-hander is set to become a free agent after this season.

Marshall, 29, is set to earn $3.1MM in 2012 in the final season of a two-year deal he signed with the Cubs.  MLBTR's Dan Mennella recently looked at what it would take for the Reds to sign him to a new deal and noted that Meister Sports Management will likely use the three-year, $15MM deal lefty Scott Downs signed with the Angels as a starting point.

The Cubs agreed to send Carlos Zambrano to the Marlins for Chris Volstad today. The Cubs take on nearly all of Zambrano’s salary, but in doing so they obtain Volstad, a valuable ground ball pitcher who has consistently made his starts since joining the Marlins’ rotation in 2008. He’s arbitration eligible this offseason and under team control through 2014. Before the trade, Cubs president of baseball operations Theo Epstein joined 720 WGN in Chicago for an extended interview. Here are some highlights:

While Cubs closer Carlos Marmol grabbed attention the past couple years for his staggering strikeout rate and spectacularly excruciating blown saves, North Siders fans and fantasy owners in holds leagues alike will tell you that left-hander Sean Marshall was something of an underappreciated gem in Chicago's bullpen.

Indeed, after struggling as a starter early in his career, Marshall, 29, has settled in nicely as a reliever, serving as a dominant setup man in his two seasons spent exclusively in the bullpen. Last year was his finest, as the southpaw posted a 2.26 ERA, 9.40 K/9, 2.02 BB/9, 57.5% groundball rate and compiled 2.8 WAR. Apparently, the Cubs' division rivals took note, as Marshall changed uniforms within the NL Central in December, joining the Reds in a seemingly out-of-nowhere trade that sent Travis Wood back to the Cubs.

Marshall is set to earn $3.1MM in 2012 and is scheduled to hit free agency after the season, although Reds GM Walt Jocketty indicated that Marshall's foray into the open market may never come to fruition: "No guarantees, but we're going to try to sign him." Interestingly, Jocketty also said the Reds have not yet deterimed Marshall's role and left open the possibility of the left-hander closing, contingent upon whether they sign someone else to handle the ninth.

While we could debate the merits of strict bullpen distinctions such as "setup men" and "closers," the fact is that pitchers in those respective groups are usually compensated differently. So the uncertainty regarding Marshall's role and the Reds' interest in, or ability to, procure a so-called closer may be more than a minor footnote to the trade, at least with respect to Marshall's next contract.

If Marshall and his representatives at Meister Sports Management are amenable to signing an extension now – and reading the tea leaves from Jocketty's comments, they might be – they'll likely use the three-year, $15MM deal lefty Scott Downs signed with the Angels last offseason as a starting point in negotiations. And in light of the big contracts relievers have been securing this offseason, an annual average salary of $5MM is probably modest, so it could be bumped up from there.

The bird-in-hand philosophy could probably make Marshall a wealthy man before he even throws a pitch in 2012, but if he wants to leave open the possibility of getting paid like a closer, he could opt to play out his contract year. This would be an especially risky tack for a reliever, who are notoriously volatile from year to year, but could prove lucrative if Marshall is thrust into closing, approximates his 2011 numbers and hits free agency as a 30-year-old coming off a season in which he sewed up 35 or 40 saves.

While there are a few conditions that have to fall into place in that scenario for Marshall before we get ahead of ourselves, it's worth noting that Ryan Madson basically followed a similar arc and positioned himself for a windfall heading into this offseason.

The Reds acquired shutdown lefty Sean Marshall from the Cubs for three young players earlier today, and they also claimed righty Josh Judy off waivers. GM Walt Jocketty spoke to reporters about the moves and more this afternoon, so let's recap…

The Cubs completed the Sean Marshall trade today, sending the lefty to the Reds for three young players. President of baseball operations Theo Epstein spoke to reporters after the deal was finalized, discussing a few different topics. Let's recap…

The Reds have already improved their starting rotation with the addition of Mat Latos this offseason, and now they've bolstered the bullpen. In a rare intra-division trade, Cincinnati has acquired lefty reliever Sean Marshall from the Cubs for Travis Wood, Dave Sappelt, and Ronald Torreyes. Both teams have announced the trade. 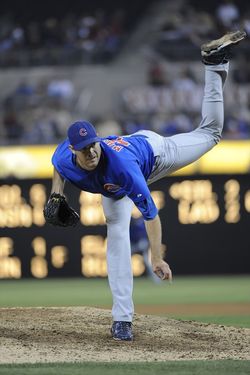 Marshall, 29, has established himself as one of the game's top left-handed relievers. He posted a 2.26 ERA with 9.4 K/9, 2.0 BB/9 and a 57.5% ground ball rate in 2011. He'll earn $3.1MM during the 2012 season, after which he's eligible for free agency. The Reds have been looking for a closer, but it's not clear how they'll use Marshall and how his presence will affect Cincinnati's interest in relievers such as Francisco Cordero.

Cornelius Alexander "Connie" Mack was born on this day in 1862.  After an 11-year playing career, Mack went on to become the manager and co-owner of the Philadelphia Athletics in 1901 and was a fixture in the A's dugout for the next half-century.  Between his 50 years with the A's (and three years managing the Pirates from 1894-96), Mack won five World Series titles and compiled a 3731-3948 record.  Needless to say, Mack's records for managerial wins and losses will never be broken.

Some news from around the majors…

11:52pm: The deal is close, a source tells Bruce Levine of ESPNChicago.com, and it includes the Cubs receiving two minor leaguers along with Wood.  Rosenthal and Morosi say the trade discussions are in the advanced stages.

9:12pm: The Reds and Cubs are discussing a trade that would involve starter Travis Wood going to Chicago in exchange for reliever Sean Marshall, Major League sources tell Ken Rosenthal and Jon Paul Morosi of FOXSports.com. It's not known whether other players would be included in the potential swap, according to the report.

After acquiring Mat Latos in a trade with the Padres last week, Reds GM Walt Jocketty suggested he'd like to focus on bolstering his bullpen. Cincinnati is without a nominal closer as of now – incumbent Francisco Cordero remains on the free agent market - so perhaps Marshall, who has settled in as an effective late-inning reliever for the Cubs the past couple seasons, could man that role for the Reds.

Wood, meanwhile, is a player Cubs president Theo Epstein liked last season when Epstein was still with the Red Sox, the sources tell FOXSports. In just about one full season of work – 35 starts, 208 innings over two seasons – at the Major League level, Wood has posted 6.99 K/9, 2.85 BB/9 and a tendency to produce fly balls (31.4% GB rate).

Despite being only 24 and under team control for five more years, Wood has perhaps become expendable with the Reds now having six other starters in Latos, Johnny Cueto, Mike Leake, Homer Bailey, Bronson Arroyo and Aroldis Chapman.

The Rangers and Blue Jays like Matt Garza and he’s not the only Cubs pitcher about whom other teams are inquiring, Ken Rosenthal of FOX Sports reports. Left-hander Sean Marshall is also drawing heavy interest.

Lack of minor league depth and restrictions on draft spending could motivate the Cubs to make a deal, Rosenthal writes. MLB executives say the Cubs are frustrated by limitations on amateur spending, according to Yahoo's Jeff Passan.

The Cubs were said to be 'open for business' on Garza last month, but president of baseball operations Theo Epstein said he'd like to build around the 28-year-old. Padres GM Josh Byrnes has interest in Garza.