The Mets are “actively” trying to trade Bartolo Colon, Dillon Gee or Jon Niese, Ken Davidoff of the New York Post reports. No specific trade appears imminent at this time, however. One issue is that the only significant free agent starting pitcher to sign so far has been A.J. Burnett, leaving a glut of starting pitching on the free agent market. The Mets hope that the upcoming Winter Meetings will help clear a path for starting pitching trades.

It comes as no surprise that the Mets are proactively trying to deal a pitcher. The Mets have a strong core of young pitching that includes Matt Harvey, Jacob deGrom, Zack Wheeler, and Noah Syndergaard, and if everyone is healthy, there’s currently no room for those four, plus all the veterans, in the big-league rotation (although Syndergaard could start the season in Triple-A regardless). As Davidoff notes, Colon, Gee and Niese don’t have a ton of value on their own, but the Mets could use one of them to acquire a role player or a prospect, while also clearing salary.

None of the three have exorbitant contracts, but their trade value is, perhaps, limited in this market — as Davidoff’s colleague Joel Sherman recently noted, this offseason is a difficult one in which to trade pitching, not only because of the free agent options available, but because of more tantalizing trade possibilities, like Johnny Cueto and Cole Hamels. Teams attempting to trade back-of-the-rotation types might have a tougher time, at least until some of the bigger-ticket players find teams.

Max Scherzer tops the list of free agents who could wait until the new year to sign, Jim Duquette writes for MLB.com. Perhaps it’s no surprise that three of the five players on the list, including Scherzer, are represented by Scott Boras, who often prefers to wait for the market to come to him. Duquette suggests that one potential late signee who isn’t a Boras client is Francisco Liriano, who has a qualifying offer attached and who has topped 163 innings in a season only once in his career. Here are more notes from around the big leagues.

The Blue Jays are considering signing free agent Alberto Callaspo to fill their hole at second base, Ken Rosenthal of FOX Sports tweets. The Blue Jays have already added Russell Martin and Josh Donaldson to their offense this offseason, but they’re still weak in left field and at second, where Ryan Goins currently tops their depth chart. The Jays also have Maicer Izturis, who will be returning from a significant knee injury.

Callaspo, 31, had a poor .223/.290/.290 season with Oakland in the last season of a two-year deal he originally signed with the Angels. He should therefore be available fairly cheaply, however, and Rosenthal notes that the Jays think Callaspo ought to rebound in 2015. Callaspo also ought not to require a multi-year deal, which means the Jays can keep second base clear for recently-acquired prospect Devon Travis in 2016 if Travis continues to hit.

Callaspo had back-to-back seasons of at least 2.9 WAR in Los Angeles in 2011 and 2012. At his best, the switch-hitter has generated value with an OBP-heavy offensive game and a good glove at both second base and third. He did, however, have negative UZR figures at second in both the last two seasons. Still, Toronto’s reported opinion that Callaspo is a good candidate to rebound appears to be well founded — Steamer projects he’ll hit .252/.326/.354 and be a win above replacement if given a full-time job next season.

Halfway through the 2014 season, longtime White Sox outfielder Alejandro De Aza looked like a probable non-tender after hitting .243/.309/.354 and getting eaten alive by left-handed pitching in a lackluster age-30 season in Chicago. De Aza made $4.25MM in his second year of arbitration eligibility, and there was little indication he would be worth a raise on that heading into 2015 and his likely decline phase. 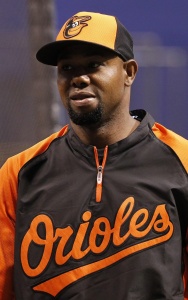 A late-August trade to Baltimore and a well timed hot streak might have earned De Aza another season in the arbitration system, however. He hit .293/.341/.537 in 89 plate appearances with the Orioles, bringing hit 2014 total to a more respectable .252/.314/.386, then kept hitting in the postseason. De Aza is also a slightly above average defender in an outfield corner and can play center field, so he has defensive value to fall back on. MLBTR projects he’ll make $5.9MM through the arbitration process this offseason, and for the right team, he’s probably worth it.

The only question is whether the Orioles are the right team. The O’s are trying to re-sign a fellow left-handed outfielder in Nick Markakis, as well as DH/OF Nelson Cruz. They’ve also reportedly discussed Matt Kemp with the Dodgers, and they’re in on Torii Hunter and Melky Cabrera. How much worse De Aza is than someone like Markakis or Hunter could actually be debated, but any combination of Markakis, Cruz, Kemp, Hunter and Cabrera would make De Aza less useful to the Orioles.

On top of that, Baltimore faces a crunch of arbitration-eligible players, many of whom either are coming off very good seasons or have high salaries already. The Orioles’ 11 arbitration-eligibles (De Aza, Matt Wieters, Steve Pearce, Bud Norris, Tommy Hunter, Chris Davis, Brian Matusz, Chris Tillman, Miguel Gonzalez, Ryan Flaherty and Zach Britton) are projected to make a combined $56.9MM, and the Orioles could decide De Aza is a luxury they can do without, particularly if they splurge on, say, Markakis and Cruz, or at least feel it’s likely they’ll re-sign. They already have a lefty backup outfielder in David Lough who had a similar season to De Aza with the bat and will make near the league minimum in 2015, so heading into the season with De Aza on their roster only makes sense for the Orioles if they have a starting spot available for him.

The good news for De Aza (assuming he wants to be tendered — he might actually get slightly more than one year and $5.9MM on the open market) is that there’s little time before Tuesday night’s tender deadline for the Orioles to settle their outfield picture. If the O’s do strike out on Markakis, Cruz, Kemp or anyone else they might pursue, De Aza should have significant value for them. If they do tender him and then acquire more players who might make him superfluous, they would probably still be able to trade him, even though they wouldn’t be likely to get much back. The best guess here, then, is that the Orioles tender De Aza, and that’s reportedly the direction they’re leaning anyway. The Praver/Shapiro client probably ought to plan on heading into the season with Baltimore.

A look back at the original reporting and analysis found on MLBTR the last seven days scattered amongst the Thanksgiving leftovers, Black Friday shopping bags, and Cyber Monday ads:

With the Winter Meetings just a week away, MLB.com’s Anthony Castrovince names the top ten Hot Stove storylines heading into December. How the top-tier starting pitcher market shakes out heads the list, according to Castrovince, who notes the trade market for the likes of Cole Hamels, Jordan Zimmermann, and Jeff Samardzija will heat up once free agents Jon Lester and Max Scherzer sign. Among Castrovince’s other top headlines this month are whether the Braves trade Justin Upton and how the Red Sox and Dodgers deal with their surplus of outfielders.

Elsewhere in baseball on the final day of November:

Braves President of Baseball Operations John Hart was a guest of Jim Bowden and Jim Duquette on MLB Network Radio’s “The Front Office” and addressed numerous topics. Here are the highlights (all links go to the Twitter accounts of Bowden and Duquette):

Earlier today, we learned an AL East GM wonders whether the Yankees, instead of trying to re-sign David Robertson, may opt to pursue Andrew Miller to form a lefty-righty closer tandem with Dellin Betances. Here’s the latest on Robertson, the top free agent reliever:

The latest from the AL Central..

Earlier today, we rounded up some items from the AL East.  Here’s the afternoon edition..