John Lackey intends to pitch “for a couple of more years” after getting clearance from his family, ESPN’s Buster Olney tweets.  Though Lackey turns 37 in October, he’ll still be in line for a multi-year deal in free agency this winter given how well he’s pitched over the last three seasons.  Lackey has expressed an interest in remaining in the NL and ideally continuing to pitch for the Cardinals, who could be interested on a short-term deal.

Cubs right-hander Jake Arrieta threw his first career no-hitter tonight, shutting down the Dodgers on 12 strikeouts and just two runners allowed (one via walk, one via error).  By coincidence, Charlie Wilmoth looked at Arrieta’s case as an extension candidate earlier today on MLBTR to see what it might take for Chicago to lock the ace up over the long term and whether or not an extension makes sense for either side at this time.  Needless to say, Arrieta’s stock only continues to rise after performances like tonight’s history-making gem.  Here’s some more from around baseball…

3:23pm: The Pirates have now released a statement to announce that Burnett has been diagnosed with a flexor strain in his right elbow. Burnett received a platelet-rich plasma injection, and is estimated time of return is four weeks, per the announcement.

2:46pm: Stephen Nesbitt of the Pittsburgh Post-Gazette tweets that Burnett says he’s yet to even receive a diagnosis following his MRI.

AUG. 3, 1:44pm: FOX’s Jon Morosi reports (Twitter links) that Burnett received better news than he had hoped. Burnett has a strain in his right flexor tendon, but his ulnar collateral ligament is intact. He’ll undergo treatment with the hope of returning this season, per Morosi.

AUG. 2: After being placed on the 15-day DL with elbow inflammation on Friday, A.J. Burnett admitted that the injury may sideline him for the rest of the 2015 season.  In an interview with MLB.com’s Tom Singer, Burnett predicted that his Monday appointment with Pirates doctors will reveal that he’s suffered damage to either his UCL or flexor tendon, yet the veteran righty has no plans to undergo surgery for either issue.

“It is difficult.  I’m prepared for both…if I just need some rest or something more. In my mind, surgery is not an option. I’d built up some pain tolerance. It comes and goes, part of doing this 16 years. You figure out what you can and can’t do,” Burnett said.  “It was just really bad on everything the other night. I never got loose, never got comfortable. We’ll find out tomorrow, when they look at it. I don’t expect it to go away, don’t expect it to get better.”

Burnett said he’d been dealing with some degree of elbow discomfort for years, though “it hasn’t been anything to worry about” until his start last Thursday.  Given Burnett’s rough performance since the All-Star break (10.13 ERA over 16 innings), it could be that his injury has been bothering him for longer than just his most recent outing, or it could be that Burnett was simply regressing a bit after an outstanding first half.

While Burnett has ruled out surgery, he isn’t willing to return to mound unless he’s able to pitch effectively through the pain.  He won’t try to tough it out just for the sake of coming back “if I can’t throw, or if I’m throwing what I was throwing the other night. I can’t do it to these guys.”

If the elbow injury indeed ends Burnett’s season, it will also mark the end of his 17-year career, as the veteran has already announced that he’ll be retiring once the 2015 campaign is over.  Burnett went out on a high note, making his first All-Star team after posting a 2.11 ERA and 100 strikeouts (against 33 walks) over his first 119 1/3 innings.  Even if the right-hander is done for the season, he’s already more than delivered on the one-year, $8.5MM deal he signed last winter to return to Pittsburgh.

The Pirates’ postseason chances will suffer a blow with Burnett out, though they still have Gerrit Cole and Francisco Liriano headlining a rotation that includes Jeff Locke, Charlie Morton and the newly-acquired J.A. Happ.

Cubs third baseman Kris Bryant is baseball’s best prospect, as per Baseball America’s newly-released list of the top 100 prospects in the game.  Since being drafted second overall in 2013, Bryant has put up an extraordinary .331/.431/.673 slash line and 58 homers in 832 minor league plate appearances, which includes an 1.036 OPS in 297 PA at the Triple-A level last season.  The Cubs placed six players on the top 100 list overall, including four in the top 19 (Kyle Schwarber at #19, Jorge Soler at #12) and two in the top three, as shortstop Addison Russell was ranked in the #3 spot.

On this date 42 years ago, MLB owners unanimously approved a three-year experiment for the American League to use the designated hitter. The initial vote had all NL owners vetoing the DH while the AL split 8-4 in favor with the concept’s creator, A’s owner Charlie Finley, voting against because his idea of a designated runner was nixed.

Here’s the latest from around baseball:

The Pirates had the inside track on signing A.J. Burnett, as agent Derek Braunecker told Travis Sawchik of the Pittsburgh Tribune-Review.  “It’s the only place he wanted to play in 2015. He instructed me to negotiate exclusively with the Pirates and thankfully there was mutual interest,” Braunecker said.  Burnett enjoyed his previous stint in Pittsburgh and rejoined the Bucs on a one-year, $8.5MM deal.  Here’s some more from around the NL Central…

The Tigers are a team built to win in the present, but that doesn’t mean their future has to be bleak, Jeff Sullivan of Fangraphs writes. The team’s recent four-year deal for Victor Martinez is one of many Tigers contracts that could turn ugly, and the team already has $75MM on the books in 2018 for Martinez, Miguel Cabrera and Justin Verlander. But that doesn’t mean they won’t have any flexibility. Considering the likelihood of modest payroll increases in the coming seasons, they could have a payroll north of $180MM in 2018. That would give them enough leeway to have a shot even with their current commitments and thin farm system. Sullivan suggests that one future-oriented move the Tigers could make would be to sign J.D. Martinez to a long-term deal. Here are more notes from around the big leagues.

A.J. Burnett will prove to be a bargain for the Pirates, Joe Starkey of the Pittsburgh Tribune-Review writes. The Pirates have a great record with recent free agents like Russell Martin and Edinson Volquez, and Burnett is still a strikeout pitcher. He’ll also be recovered from a hernia issue that dogged him in 2014, and he’ll have a more favorable ballpark and defense than he had in Philadelphia. Here are more notes from the Central divisions. 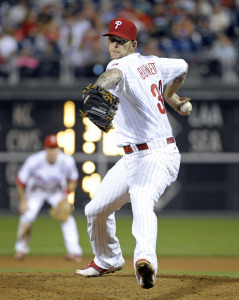 10:50am: A team source disputes that any offer was made to Burnett, tweets Eduardo Encina of the Baltimore Sun.

10:15am: The Orioles have extended an offer to free agent righty A.J. Burnett, Jeff Passan of Yahoo Sports reports on Twitter. Though nothing is close at the moment, Passan notes that Baltimore will be a player in the starting pitching market.

Baltimore was strongly rumored to be a destination for Burnett last year, before he signed on with the Phillies. That was due in large part to the fact that the veteran was said to prefer to pitch for a team close to his Maryland home. This time around, however, he is said to be willing to play anywhere for a contender.

The O’s had a surprisingly effective rotation last year, in spite of the struggles of major free agent signee Ubaldo Jimenez. In terms of bottom-line results, the club’s rotation landed at the back end of the top dozen teams by measure of earned run average. ERA estimators, however, were generally less favorably inclined.