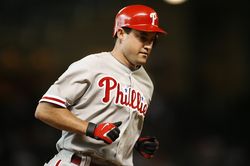 Three years ago today, the Padres traded Khalil Greene to the Cardinals for Luke Gregerson and Mark Worrell. Greene hit .200/.272/.347 during his one season in St. Louis and has been out of baseball for two years while Gregerson has emerged as one of the game's best setup relievers. Here's the latest from baseball's two West divisions…

As Ryan Madson's agreement with the Phillies falls through, we learn that one of his former Phillies teammates may be hanging 'em up …

Evan Longoria, Dan Johnson, Chris Carpenter and Robert Andino delivered in big moments for their respective teams on this incredible night of baseball, as the Cardinals and Rays won the wild cards. Some links as the season winds down…

The 2011 Giants closely resembled last year’s World Championship team, but change lies ahead for San Francisco. Henry Schulman of the San Francisco Chronicle explains that health considerations and the rising cost of arbitration eligible players will shape next year’s Giants team. Here are some highlights from Schulman's piece:

11:00pm: The Giants are not releasing Burrell, according to Henry Schulman of the San Francisco Chronicle (on Twitter).

9:37pm: The Giants are expected to release Pat Burrell to create roster space for Carlos Beltran, according to CSNBayArea.com. San Francisco will option Brandon Belt to Triple-A to create space on the active roster for Beltran, who was acquired for pitching prospect Zack Wheeler earlier today.

Burrell, 34, re-signed in San Francisco for $1MM after a strong second half to the 2010 season helped carry the Giants to the World Series. Burrell hit .266/.364/.509 with 18 homers last year, but his production has fallen off in 2011. The former first overall pick has a .233/.342/.419 line with seven homers this season. If the Giants release him, he'll be available for a pro-rated portion of the MLB minimum, just as he was a year ago.

Before accepting a trade to San Francisco, Carlos Beltran refused to waive his no-trade clause to go to the Pirates, according to Dejan Kovacevic of the Pittsburgh Tribune-Review. Like the Indians, the Pirates made an aggressive push for Beltran before he headed for Northern California. Here’s the latest on the Giants, as they prepare for a run at a second consecutive title…

There are two intra-divisional matchups between NL and AL West rivals slated for tonight.  The Rockies face the Diamondbacks at Chase Field while the Mariners host the Rangers.  Here are some tidbits from the western divisions…