Former Cardinal Matt Holliday will return to the team he spent eight seasons playing for, signing on as bench coach under manager Oliver Marmol, per Derrick Goold of the St. Louis Post-Dispatch. The team has also promoted Dusty Blake to pitching coach, while Turner Ward will take over as hitting coach.

Holliday, 42, last appeared in the big leagues in 2018, and has been recently coaching at Oklahoma State with his brother. He hit 156 home runs for the Cardinals between 2009-16, going to the All-Star game four times and earning MVP votes in four of his seasons there. Originally drafted by the Rockies in the seventh round of the 1998 draft, Holliday spent six years in Colorado, including a memorable 2007 season. That year he hit .340/.405/.607 with 36 home runs and finished second in NL MVP voting. The Rockies traded him to Oakland in 2009 with Holliday one year away from free agency, but when the Athletics scuffled that year he was traded to the Cardinals at the deadline. He went to free agency that winter, but re-signed with the Cardinals on a seven-year, $120MM deal, continuing what would be a memorable time with the Cardinals which included a championship in 2011.

He’d gone on to have a season with the Yankees, before retiring in 2018 after a short second stint with the Rockies. There had been speculation that the Cardinals would turn to him as their hitting coach, but instead he’ll wind up as bench coach in Marmol’s overhauled staff.

Current assistant hitting coach Turner Ward will instead assume the hitting coach responsibility. He replaces Jeff Albert, who elected not to return for another season in 2023. Ward spent twelve years in the big leagues between 1990-2001, appearing for six teams. He worked with the Diamondbacks, Dodgers and Reds in various coaching positions, before the Cardinals hired him as their assistant hitting coach a year ago.

Blake, 40, worked as a pitching coach at Duke university, before the Cardinals hired him prior to the 2021 season. He had been working as the team’s pitching strategist, but is promoted to the pitching coach role after Mike Maddux’s departure.

Nov. 7: Katie Woo of The Athletic tweets that Schumaker’s deal is a one-year contract with options.

Nov. 6: Skip Schumaker is returning to the Cardinals. The former infielder will join new manager Oliver Marmol’s staff as the bench coach, per Rob Rains of stlsportspage.com (via Twitter). The agreement will be finalized this weekend, per Derrick Goold of the St. Louis Post-Dispatch.

Schumaker was thought to be a candidate to take over as manager after Mike Shildt was let go, and while that job ultimately went to Marmol, Schumaker returns to the Midwest anyway to serve as Marmol’s right hand. Schumaker was the Padres’ first base coach last season. He now steps into the role that Marmol himself filled for St. Louis last year.

The scrappy infielder/outfielder was a fan favorite of the Cardinals’ rabid fanbase during his playing days. He spent eight seasons in St. Louis, slashing .288/.345/.377 in 2,687 plate appearances.

Oct. 25: The Cardinals have formally introduced Marmol as the 51st manager in franchise history. He signed a three-year contract that’ll run through the 2024 season, reports Derrick Goold of the St. Louis Post-Dispatch.

Oct. 24: The Cardinals are set to announce bench coach Oliver Marmol as the team’s next manager, according to Katie Woo and Ken Rosenthal of The Athletic (Twitter link).  The Cards have called a press conference for Monday morning to officially introduce Marmol.

The hiring concludes an unusual start to the St. Louis offseason, as there wasn’t any indication that previous manager Mike Shildt’s job was in danger before the Cardinals surprisingly fired Shildt 10 days ago.  As president of baseball operations John Mozeliak told reporters, “philosophical differences” emerged with Shildt, and while some reports have surfaced about what some of those differences may have been, it appears the issue was indeed with Shildt alone.  It seems as though the Cards will be bringing back most of their coaching staff for 2022, though a new bench coach will now be needed with Marmol being elevated to the top job. 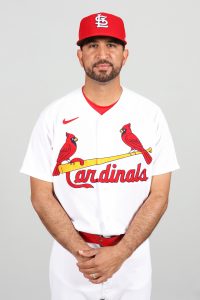 Marmol was seen as a candidate essentially from the moment the news broke of Shildt’s firing, and at age 35, Marmol is now the youngest current manager in the big leagues.  He is also the first person of color to work as the Cardinals manager in over 80 years, since Mike Gonzalez briefly managed the team on an interim basis in both 1938 and 1940 (a total of 23 games).

Despite his young age, Marmol already has plenty of experience on the bench.  Originally a sixth-round pick for the Cards in the 2007 draft, Marmol played four seasons in the minors before transitioning to coaching and managing in the St. Louis farm system.  He has spent the last five seasons on the Cardinals’ MLB coaching staff, working two years as first base coach before working as Shildt’s bench coach for the last three seasons.

Marmol is now the third manager Mozeliak has hired during his tenure as the team’s GM and president of baseball operations, and like predecessors Shildt and Mike Matheny, Marmol also has longstanding ties to the St. Louis organization.  In a sense, Marmol is something of a blend of the two previous skippers — he has Matheny’s relative youth and more recent playing experience, but also a resume of managerial experience in the minors and coaching experience in the majors, a la Shildt.  Marmol has been mentioned as a potential manager of the future for the Cardinals and other teams, so the Cards’ hiring decision may have been partially inspired by a desire to keep Marmol in the fold.

The newly-minted skipper will face plenty of expectations in the top job, as the Cardinals have reached the postseason in three straight seasons but suffered two early exits (losing to the Dodgers in this year’s wild card game and to the Padres in the 2020 wild card series) and a four-game sweep to the Nationals in the 2019 NLCS.  St. Louis fans are always expecting to win, and since 2022 will be Yadier Molina’s farewell season, there is perhaps even extra pressure for extended playoff success next year.

The Cardinals recently shocked the baseball world by firing manager Mike Shildt, shortly after an incredible season in which a 17-game winning streak catapulted them into the postseason for a third consecutive year. Just a few days prior to that, it seemed like the club would take the opposite path and extend him beyond 2022, the last year of his contract. Instead, with the offseason now just about a week away, their plans for a Shildt-less future are not publicly known.

Ben Frederickson of the St. Louis Post-Dispatch took a look at the situation, reporting that Cardinals’ president of baseball operations John Mozeliak has internal candidates like Oliver Marmol and Stubby Clapp at the top of the list. Marmol has been with the organization as a coach for a decade now, as he became the hitting coach for the Gulf Coast League Cardinals in 2011. He then went on to manage the rookie-ball Johnson City Cardinals and the Class A-Advanced Palm Beach Cardinals. He’s been with the big league club since the 2017 season, serving as first base coach and then bench coach. Clapp spent some time coaching in the Astros’ and Blue Jays’ organizations, before joining the Cardinals as the manager for the Triple-A Memphis Redbirds for the 2017 season. He came up to the major league team as first base coach for the 2019 season. The fact that they are already in the Cardinals organization would mean Mozeliak is already familiar with their abilities, making them known quantities. However, the same was true of Shildt, who had been with the Cardinals in various capacities for over a decade before becoming manager after the firing of Mike Matheny in 2018. It’s unclear if Mozeliak wants to take that same path this time around.

Frederickson also throws out a couple of wildcards, reporting that Rick Renteria and Matt Holliday have make it known they are interested in the position. Renteria would bring some managerial experience, having been the bench boss for the 2014 Cubs then the White Sox from 2017 to 2020. Holliday, on the other hand, would bring no such experience at the big leagues, although he is currently listed as a volunteer assistant coach at Oklahoma State University, where his brother Josh is the head coach. Holliday was with the Cardinals as a player from 2009 to 2016. Hiring Holliday would come as a surprise, although it would mirror the hiring of Matheny in some ways. When Matheny was hired in 2011, he was also just a few years removed from his playing days and had no previous big league coaching experience.

9:56 PM: The Cardinals plan to have their next manager in place by mid-November, per The Athletic’s Katie Woo. With the rest of the coaching staff remaining intact, it makes sense that the Cards could be relatively quick with their manager hire.

7:06 PM: The speculation has already begun on who might replace Mike Shildt as the next manager of the St. Louis Cardinals. The popular internal candidates appear to be Oliver Marmol and Stubby Clapp, per Jon Morosi of the MLB Network (via Twitter).

St. Louis usually likes to promote from within, and both Marmol and Clapp have surfaced before as candidates for managerial openings. Neither, then, would be a shocking choice, though given the surprising nature of Shildt’s release, anything could be on the table. Without knowing the real nature of the disconnect between Shildt and Cardinals’ president of baseball ops John Mozeliak, it’s tough to speculate on potential targets.

Players in San Diego, however, are hearing that former Cardinal fan favorite Skip Schumaker might be a candidate for the role, per Kevin Acee of the San Diego Union-Tribune (via Twitter). There would be support from Padres’ players were Schumaker considered as the Padres’ next manager, notes Acee, though it’s not clear yet what direction President of Baseball Ops A.J. Preller will lean.