The Nationals have designated left-hander Sam Clay for assignment, per a team announcement. His spot on the 26-man and 40-man roster will go to righty Mason Thompson, who has been reinstated from the 60-day injured list. Washington also optioned catcher Riley Adams to Triple-A Rochester and recalled fellow backstop Tres Barrera in his place.

Clay, 29, signed a big league deal with the Nats in the 2020-21 offseason despite never having pitched at the Major League level. The former Twins fourth-rounder had posted solid numbers between Double-A and Triple-A in 2019 before the canceled 2020 minor league season, with his enormous 71.2% ground-ball rate likely holding particular appeal for the Nats.

Unfortunately, things haven’t panned out as the Nationals or Clay himself hoped upon signing that deal. He made his big league debut in 2021 when he tossed 45 innings out of Davey Martinez’s bullpen, but Clay’s 5.60 ERA was one of many contributing factors to a disastrous Nationals season. Clay posted an excellent 60.1% grounder rate last year but also turned in a well below-average 15.9% strikeout rate and a fairly bloated 10.3% walk rate.

So far in 2022, things haven’t gone much better. While Clay has a solid 3.10 ERA, 21.7% strikeout rate, 7.6% walk rate and 64.5% ground-ball rate in 20 1/3 Triple-A frames, he’s again been ineffective against big leaguers. He’s pitched 4 1/3 innings for the Nats this season, yielding five runs on three hits and three walks as well as four hit batsmen in that time. That shaky performance has inflated his career ERA in the Majors to 6.02.

Clay has a decent track record in the upper minors, one minor league option remaining beyond this season, and a clear ability to induce grounders — all of which could conceivably hold some appeal to another club with different ideas about how to maximize his results. The Nats will have a week to trade him, pass him through outright waivers or release him.

Replacing Clay on the roster will be the 24-year-old Thompson — a hard-throwing, 6’7″ righty who came to the Nats last summer in the deadline deal that shipped reliever Daniel Hudson to the Padres. Thompson, a third-round pick by San Diego back in 2016, pitched just one scoreless inning this season before landing on the injured list with a biceps strain that has kept him out since.

He made his MLB debut last season, tossing 24 2/3 innings between the Padres and Nats. In that time, Thompson logged a 4.01 ERA with more questionable secondary marks, including a 19% strikeout rate and 12.4% walk rate. He sat at 96.3 mph with his sinker and kept 50% of the balls in play against him on the ground, however, and his slider is considered an above-average offering as well.

As for the swap behind the dish, Adams will head to Rochester and presumably receive the regular playing time that has eluded him behind fellow rookie Keibert Ruiz this season. The 26-year-old has appeared in 27 games and tallied just 88 plate appearances so far this season, batting .192/.284/.321 along the way. Adams has plenty of raw power and consistently high walk rates, but he only played in a total of 36 Triple-A games before being called to the Majors. The Nats apparently feel it’d be better for his development to get more consistent looks in Rochester than playing sparsely behind Ruiz.

The Nationals announced they’ve selected the contract of reliever Javy Guerra and recalled catcher Riley Adams from Triple-A Rochester. Righty Wander Suero was optioned to Triple-A, while catcher René Rivera landed on the 10-day injured list, retroactive to August 2, with a right elbow contusion. Washington already had a pair of vacancies on the 40-man roster arising out of last week’s series of trades.

Guerra will be making his season debut when he gets into a game, marking the eleventh consecutive year in which he’s picked up some big league time. Guerra saw action with the Nats in each of 2019-20, tossing 69 1/3 innings of 4.67 ERA/4.55 FIP ball. The veteran righty has only struck out 18.5% of opponents over that stretch, but he’s been stingy with walks, doling out free passes at just a 6.4% clip.

The Nationals signed Rivera to a major league contract in mid-July, but he’s only picked up 15 plate appearances over the past couple weeks. While he’s out, he’ll be replaced by the 25-year-old Adams, who came over from the Blue Jays in exchange for Brad Hand in advance of last week’s trade deadline. 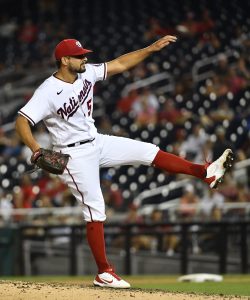 In a bit of good news for Orioles’ fans, Trey Mancini will participate in this year’s Home Run Derby, per The Athletic’s Dan Connolly (via Twitter). Mancini should provide some feel-good coverage for the 2021 All-Star festivities. Having missed last season while being treated for stage 3 colon cancer, Mancini has returned to lead the Orioles with a .260/.337/.466 triple-slash line with 14 home runs and 52 runs batted in, good for a 121 wRC+. Let’s check in with the other clubs in the AL East…

The Blue Jays have placed catcher Danny Jansen on the 10-day injured list with a right hamstring strain, Shi Davidi of Sportsnet was among those to report. The club called up fellow backstop Riley Adams to take Jansen’s place.

Toronto has gotten little offensive production this year from Jansen, who’s off to a .157/.248/.278 start with three home runs in 122 plate appearances. Reese McGuire has recorded similarly uninspiring numbers, while Alejandro Kirk hit the IL at the beginning of May with a left hip flexor injury. The Blue Jays have nonetheless come out of the gates with a respectable 30-27 record.

Now, the hope for the Jays is that they’ll receive a boost from Adams, a 24-year-old who has held his own against minor league pitching since the team chose him in the third round of the 2017 draft. Adams has slashed .265/.366/.422 with 27 home runs in 1,129 plate appearances in the minors, and he has worked his way to the majors this year with an even better .250/.410/.600 line and six homers over 78 PA in his first Triple-A action. MLB.com ranks Adams 18th in the Jays’ system, lauding his combination of offensive power and defensive ability.

Catcher Danny Jansen suffered a right hamstring strain that forced him out of Sunday’s 6-3 Blue Jays loss to the Astros.  Jansen was hurt running the bases trying to beat out a fielder’s choice in the third inning, and Reese McGuire took over at catcher for the top of the fourth.  Jays manager Charlie Montoyo told MLB.com’s Keegan Matheson and other reporters that Jansen would receive tests both yesterday and today to determine the extent of the strain.

With Alejandro Kirk already on the 60-day injured list, losing Jansen to the IL would leave Toronto with a catching depth chart of McGuire and (in all likelihood) Riley Adams, who is hitting .250/.410/.600 over 78 plate appearances at Triple-A this season.  Adams had never played at the Triple-A level prior to this season, and he doesn’t officially have any big league experience — the Blue Jays called Adams up for a three-day cup of coffee on the active roster in early May, though Adams didn’t appear in any games.  While McGuire is the more experienced option, his struggles at the plate over the last two seasons would perhaps mean that McGuire and Adams would be deployed in a platoon, as the youngster’s Triple-A production certainly seems to warrant a look against Major League pitching.

More from the Jays…

Adams, 23, adds another catching option to a roster already well stocked at that position. He topped out with a solid Double-A showing in 2019 and ostensibly isn’t too far from MLB readiness. The 20-year-old Moreno, on the other hand, hasn’t played above A-ball, although he hit quite well there in ’19.

Tice, 25, logged a 2.34 ERA between Double-A and Triple-A in ’19 and racked up better than 11 K/9 but did so while walking nearly six per nine frames. Palacios plays all three outfield spots and is an OBP-over-power option who has seen some time in Double-A. Lopez, 22, hasn’t advanced beyond A-ball. He hit well there in 2019 and has experience at both middle infield spots and both corner outfield positions.