We’ll track some minor moves from around the game here… 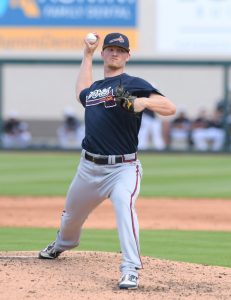 The Braves have designated catcher Carlos Perez for assignment, per a club announcement. That move came as part of a series of decisions.

Fellow receiver Tyler Flowers will make his return from the DL, which left the team without a need for Perez. The Atlanta organization also elected to bring up righty Chase Whitley while optioning Matt Wisler back to Triple-A.

Perez had a chance to make a case to be retained by the Braves after being acquired from the Angels at the outset of the season. But he managed just three singles and a walk in his 22 plate appearances for the Braves. Though he has hit the ball well at times in the minors, Perez is just a .221/.264/.325 hitter over 617 total trips to the dish at the game’s highest level.

On the pitching side, the Braves will fill out their pen by calling upon Whitley, who was acquired from the Rays over the winter. He has thrown 12 1/3 innings of 3.65 ERA ball thus far at Triple-A, with ten strikeouts against three walks. A veteran of four MLB campaigns, two apiece with the Yankees and Rays, Whitley will be joining the Braves’ MLB roster for the first time.

As for Wisler, he raised hopes with a strong season debut in which he racked up eight strikeouts without issuing a walk in seven two-hit innings. But he coughed up three free passes, nine hits, and four earned runs without recording a single K in his next outing. For now, then, the former top prospect will head back to Gwinnett and wait for another opportunity.

After 310 total frames of 5.20 ERA ball in the majors, Wisler remains in a somewhat precarious roster position. That said the Braves have cleared several 40-man spots in recent weeks, so the pressure shouldn’t be felt immediately, particularly given the team’s ongoing need for rotation depth and the fact that Wisler’s first two outings at Triple-A were quite good.

Mariners center fielder Dee Gordon is among the notable players that will be joining Rep 1 Baseball, the agency announced today. Veteran agent Nate Heisler has joined the Rep 1 ranks as a vice president, bringing with him an array of clients.

In addition to Gordon, the players going with Heisler to his new agency include major leaguers Liam Hendriks and Chase Whitley. Several prospects are coming along as well, includingJesus Luzardo and Jacob Pearson.

Gordon is obviously the most notable name on this list. He’s also under contract through at least 2020, pursuant to the extension he inked with the Marlins back in 2016. Now with the Mariners following a December swap, Gordon has been tasked this winter with moving from his accustomed middle infield role into center field in Seattle.

Hendriks is earning $1.9MM this year and will qualify for arbitration one final time at season’s end. Whitley, also a reliever, recently agreed to a $800K deal in his first trip through the arb process. Among the younger players, Luzardo has received top-100 leaguewide prospect billing.

An earlier version of this post indicated that Twins prospect Nick Gordon was also changing representation, as Rep 1 announced. A report from Jon Heyman of Fan Rag (via Twitter) now indicates that the younger Gordon will remain with the Beverly Hills Sports Council.

The Braves have claimed right-hander Chase Whitley off waivers from the Rays, reports Mark Feinsand of MLB.com (on Twitter). Whitley was arbitration-eligible for the first time this offseason and was projected by MLBTR contributor Matt Swartz to earn $1MM.

Whitley, 28, tossed 57 1/3 innings this past season in his first full year back from Tommy John surgery. The righty made all 41 of his appearances with the Rays out of the bullpen after working as a starter throughout his minor league career and early on after his MLB debut with the Yankees. Whitley logged a 4.08 ERA with 6.8 K/9 against 2.5 BB/9 and a 32.8 percent ground-ball rate. He doesn’t throw hard, averaging just 90 mph with his heater, but he still missed more bats earlier in his career and in the minors, leaving the potential for a modest uptick in strikeouts with Atlanta. (A move to the NL, clearly, won’t hurt his chances in that regard.)

The Rays are facing somewhat of a payroll crunch due in no small part to an arbitration class that at one point contained a dozen players. They’ve pared that back some by waiving Whitley and trading former closer Brad Boxberger to the D-backs, but it’s still likely that we’ll see a few more moves out of Tampa Bay before tonight’s 8pm ET deadline to tender contracts to arbitration-eligible players.

END_OF_DOCUMENT_TOKEN_TO_BE_REPLACED

Some rumblings out of Tampa Bay…