The Rockies have signed right-hander Zach Neal to a minor league contract, according to an announcement from his representatives at MSM (Twitter link). Colorado has also agreed to a minors deal with southpaw Dillon Overton, according to the team’s transactions log at MLB.com.

Coincidentally, both pitchers have logged their most significant MLB experience to date with the 2016 A’s. Neal tossed 70 innings over 24 appearances (including six starts) that year, working to a 4.24 ERA. That decent run prevention came with a complete dearth of strikeouts, though, as Neal fanned just 9.6% of batters faced. His lack of swing-and-miss caught up to him the following season, and the University of Oklahoma product worked 15 2/3 MLB frames between the A’s and Dodgers over the next two seasons.

Neal made the jump to Japan over the 2018-19 offseason, signing with the Seibu Lions of Nippon Professional Baseball. He’s spent the past three seasons there, posting a cumulative 4.49 ERA in 272 1/3 innings. Neal’s strikeout rate in Japan was still low (12.4%), but he only walked 5.6% of opponents. Neal also demonstrated elite control in his big league time (2% walk rate) and owns a 4.25 ERA over parts of five seasons at Triple-A.

Overton has 47 2/3 big league innings under his belt, appearing with the A’s, Mariners and Padres from 2016-17. He’s been tagged for a 9.13 ERA over that stretch, but he owns a 4.58 mark in four Triple-A campaigns. Also an OU graduate, Overton has a similar profile to that of Neal. He’s only punched out 12.1% of big league opponents but has a minuscule 4.8% career walk rate. The southpaw spent the 2021 campaign with the Rakuten Monkeys of Taiwan’s Chinese Professional Baseball League, pitching to a 3.75 ERA in 57 2/3 innings there.

A pair of former big leaguers have signed with teams in Asia over the past few days.

The Padres have designated righty Kevin Quackenbush for assignment and outrighted lefty Dillon Overton, Dennis Lin of the San Diego Union-Tribune reports on Twitter. Those moves help clear the way for a variety of September call-ups.

San Diego has selected the contract of right-hander Jordan Lyles and activated shortstop Erick Aybar from the DL. The club also added lefty Kyle McGrath and righty Jose Valdez to the active roster.

Quackenbush has never quite replicated the success he found in his debut season of 2014 and struggled to a 7.86 ERA over 26 1/3 major-league frames this year. Lyles was also effective in ’14 as a starter for the Rockies, but has steadily declined ever since and washed out of the Colorado bullpen earlier this year.

The Mariners have designated left-hander Dillon Overton for assignment, the team announced.  Righy Rob Whalen was optioned to Double-A and righty Max Povse had his contract selected from Double-A in corresponding moves.

Overton came to Seattle from Oakland in an offseason trade, and the southpaw posted a 6.38 ERA and just eight strikeouts in 18 1/3 innings.  Originally a second-round pick for the A’s in the 2013 draft, Overton has posted generally strong results in his minor league career, apart from a 9.33 ERA over 27 Triple-A frames this season.

The 2017 Baseball America Prospect Handbook rated Povse as the eighth-best prospect in Seattle’s system prior to the season, comparing the 6’8″ Povse to Doug Fister both in terms of height and their ability to generate ground balls.  Povse has been slowed by a hamstring injury this season, though he’ll still make the jump from Double-A straight to the big leagues after delivering a 3.46 ERA, 7.38 K/9 and 41.6% grounder rate over 39 innings.  Povse has started eight of his nine appearances this year, so he’ll likely project as a long man in the Mariners’ bullpen.

2:44pm: Hernandez is expected to be sidelined for two or three weeks at a minimum, per MLB.com’s Jon Morosi (via Twitter).

2:13pm: Both righty Felix Hernandez and outfielder Mitch Haniger are going on the 10-day DL after suffering injuries last night, as the team announced and Bob Dutton of the Tacoma News Tribune reported on Twitter.

Seattle made a variety of other roster moves, too. Righties Chase De Jong and Casey Fien, lefty Dillon Overton, and outfielder Ben Gamel are all headed onto the MLB roster. Meanwhile, righties Chris Heston and Evan Marshall have each been optioned back to Triple-A.

In Hernandez’s case, he has been diagnosed with shoulder inflammation, as Dutton tweets. But it’s still not entirely clear whether that’s just an isolated issue or if there’s an underlying injury of greater concern causing the problem. The 31-year-old has been knocked around in his first five starts, allowing 14 earned runs on 39 hits.

As for Haniger, he has been a revelation. But an oblique issue will sideline him after 95 plate appearances of .338/.442/.600 hitting. It’s still not known how severe Haniger’s injury is or what kind of timeline he’ll be facing.

Needless to say, these DL placements constitute significant losses for a struggling Seattle club, though perhaps the hope remains that neither player will be out for an extended stretch. The M’s are already staring at a 6.5 game deficit in the AL West.

Angels righty Garrett Richards may be due for a longer DL stint than had first been expected, as Pedro Moura of the Los Angeles Times reports. Richards has yet to pick up a ball since going down with a biceps strain. Given the time he has already missed, and the lack of progress thus far, it seems increasingly likely that some kind of rehab stint could be required. There’ll no doubt be some added caution taken given that Richards is only just returning from a lengthy rehab of a UCL injury. The Halos are going with J.C. Ramirez in his stead; he’ll take the ball to start a game in the big leagues for the first time tonight, as J.P. Hoornstra of the Orange County Register writes.

END_OF_DOCUMENT_TOKEN_TO_BE_REPLACED

The Mariners announced that they’ve acquired left-hander Dillon Overton from the Athletics in exchange for minor league catcher Jason Goldstein. To make room on the 40-man roster, Seattle designated catcher Jesus Sucre for assignment. Bob Dutton of the Tacoma News Tribune first reported that Overton could be on the way to Seattle (on Twitter). The A’s had just designated Overton for assignment earlier this week when they signed veteran infielder Adam Rosales to a one-year deal.

As recently as the 2015-16 offseason, Baseball America ranked Overton as the Athletics’ No. 8 prospect, though their assessment noted that Overton’s success would be determined by how much velocity he could regain following 2013 Tommy John surgery. Overton worked in the mid-90s in college but was in the upper 80s following his operation. The velocity seemingly never returned, as he averaged just 88.3 mph on his heater last year.

Overton has performed well at every minor league stop, though, and he has minor league options remaining, meaning the Mariners can send him back to Triple-A for further refinement. The Mariners’ rotation is full with Felix Hernandez, Hisashi Iwakuma, James Paxton, Drew Smyly and Yovani Gallardo all occupying spots. Left-hander Ariel Miranda is also on hand as an option in the case of injury, though he’s probably ticketed for long relief work to open the season.

Goldstein, 22, was the Mariners’ ninth-round pick just last summer. The Illinois native opened his pro career with Seattle’s affiliate in the Rookie-level Arizona League and finished out the year in short-season Class-A. Goldstein had just 68 total plate appearances in his brief time, hitting .279/.328/.311 in that time. He also threw out seven of the 14 runners that attempted to steal against him. Heading into the draft, Baseball America noted that he had limited power but handles a pitching staff well. Goldstein is no stranger to catching high-caliber arms, as he was the battery mate of 2015 first-rounder Tyler Jay (Twins) and 2016 first-rounder Cody Sedlock (Orioles) in college at the University of Illinois at Urbana-Champaign.

Sucre, 28, was out of options and looked to be a long shot to make the Mariners’ roster with both Mike Zunino and Carlos Ruiz ahead of him on the depth chart. (Seattle also claimed catcher Tuffy Gosewisch off waivers from Atlanta earlier today.) Sucre has excelled at throwing out baserunners in his career (35 percent) and typically receives average to above-average marks for his pitch-framing skills. However, he’s yet to produce at the plate in parts of four seasons in the Majors, batting .209/.246/.276 in 264 PAs.

12:06pm: The Athletics announced on Wednesday that they’ve signed veteran infielder Adam Rosales to a one-year, Major League deal. MLB.com’s Jane Lee tweets that left-handed pitcher Dillon Overton has been designated for assignment to clear a spot on the roster. 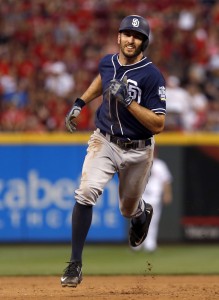 Rosales, 34 in May, is certainly no stranger to the Athletics, having spent parts of four previous seasons in Oakland. The Hilliard Sports Management client was notoriously involved in a rapid waiver cycle with the A’s and Rangers back in 2013, during which he went from Oakland to Texas, back to Oakland and back to Texas in a span of 10 days.

Most recently, however, Rosales had a late breakout with the Padres in 2016. Long known for his defensive versatility, Rosales was an unexpected source of power for the Friars last season, batting .229/.319/.495 with 13 homers and 12 doubles in just 248 plate appearances. In particular, Rosales was a weapon against left-handers, as he slashed .237/.348/.495 with six homers in 115 PAs while holding the platoon advantage.

Overton ranked as Oakland’s No. 8 prospect as recently as the 2015-16 offseason, per Baseball America, whose scouting report on the southpaw noted that his success would ultimately be determined by how much velocity he could regain following 2013 Tommy John surgery. Overton worked in the mid-90s in college but was in the upper 80s following his operation. The velocity seemingly never returned, as he averaged just 88.3 mph on his heater last year. BA’s report on him did note that he could potentially become a “finesse, back-of-the-rotation lefty,” so perhaps a team with uncertainty in the fourth and fifth spot of its rotation will take a flier on him. He’s performed well at every minor league stop he’s had in spite of the velocity decrease.