The Pirates have released right-hander Cody Ponce, according to the team’s transactions log at MLB.com. The right-hander is pursuing an opportunity in Japan’s Nippon Professional Baseball, reports Kevin Gorman of the Pittsburgh Tribune-Review. Reports out of Japan have suggested he’ll be signing with the Hokkaido Nippon-Ham Fighters.

Ponce has appeared in the majors in each of the past two seasons, combining to work 55 1/3 innings over 20 outings. Most of that work has come as a multi-inning reliever, but Ponce did make a more traditional five-inning start against the Cubs in May. Altogether, he’s managed a 5.86 ERA. Ponce has only punched out 19.6% of opponents and struggled with home runs, but he’s also been quite stingy with walks (6.9%).

Transactions of this ilk aren’t uncommon, as players on the fringes of a 40-man roster can often make more in foreign professional leagues than they’d stand to earn as up-and-down players with a big league club. It’s not out of the question Ponce returns to the majors at some point down the line, particularly if he settles in as a productive member of the Fighters’ rotation over the next season or two.

The move clears a space on Pittsburgh’s 40-man roster. That’ll be needed for the signing of Roberto Pérez, who reportedly agreed to terms on a $5MM guarantee this afternoon.

The Pirates announced Thursday that they’ve selected the contract of right-hander Clay Holmes. Pittsburgh also placed lefty Steven Brault on the 60-day injured list due to a strained left lat and placed righty Cody Ponce on the 10-day IL with forearm tightness. Righty Kyle Crick has been placed on the Covid-19 list as he goes through intake testing after being away from the team for the birth of his child.

Holmes, 28, was non-tendered by the Pirates back in December after missing much of the 2020 season due to a forearm strain. He quickly re-signed on a minor league pact, however, and he’s back on the club’s roster to begin the 2021 campaign.

The 2011 ninth-rounder has spent time with the Bucs in each of the past three seasons, pitching to a combined 5.91 ERA in 77 2/3 frames. Certainly, that’s not a great track record, but Holmes’ 59.2 percent ground-ball rate since 2018 ranks 12th among 484 big league pitchers with at least 70 innings thrown in that time. He also owns a lifetime 3.58 ERA in 223 2/3 innings of work in Triple-A, so the Pirates clearly believe there’s still some potential for him to unlock.

The Tigers will open the season with Miguel Cabrera lined up at first base, manager A.J. Hinch told reporters this morning (Twitter link via Jason Beck of MLB.com). “I think he gives us the best chance to win at first base,” Hinch said of the soon-to-be 38-year-old. Cabrera didn’t play in the field at all in 2020, serving as a designated hitter for the Tigers on 56 occasions. He did see some action there in 2019 before sustaining a season-ending biceps injury, but Cabrera hasn’t logged even 300 innings in a season at first base since the 2017 campaign. It’s not a permanent arrangement, but playing Cabrera in the field from time to time allows an outfielder to move to DH on occasion and makes it easier for the Tigers to carry Rule 5 pick Akil Baddoo on the Opening Day roster.

Some more notes from the game’s Central divisions:

The Pirates placed right-handers Mitch Keller and Michael Feliz on the 10-day injured list, the club announced.  Keller is dealing with left side discomfort while Feliz is suffering from right forearm discomfort.  Right-hander Cody Ponce and southpaw Sam Howard were called up to fill the two spots on the 30-man active roster.

Keller and Feliz both left the Pirates’ 4-3 loss to the Cubs on Saturday.  Keller tossed 2 2/3 innings before bouncing a pitch to Willson Contreras and promptly asked for a trainer visit to the mound before leaving the game.  Feliz also made an immediate departure in the eighth inning, following a pitch to Jason Heyward.

Keller’s injury hints at a possible oblique strain, and even minor oblique problems have been known to sideline players for at least a couple of weeks.  If the strain ends up being more severe, Keller’s entire season could possibly be in jeopardy.  Feliz’s issue is perhaps even more ominous considering how forearm injuries can sometimes lead to Tommy John surgery, though he doesn’t have a past history of forearm or elbow issues.

Losing the two pitchers is a big hit to a Pirates team that is already short on reliable pitching options.  In the bigger picture, Keller’s injury might also present a significant setback to one of the team’s top young assets, as Keller has been a consensus top-100 prospect for the last four years.  He didn’t impress in his first Major League action last season (a 7.13 ERA over 48 innings), though the 24-year-old was still slated to be a major part of Pittsburgh’s rotation plans both in the present and in the future.

Feliz may still be best known for being part of the four-player package sent to the Pirates from the Astros in the January 2018 Gerrit Cole trade, though the righty quietly delivered some solid bottom-line numbers in 2019.  Feliz posted a 3.99 ERA, 2.70 K/BB rate, and an 11.7 K/9 over 56 1/3 innings, having some problems with home runs (1.8 HR/9) but also limiting opposing batters to just a 29.2% hard-hit ball rate.

Both Ponce and Howard will be making their debuts on the Pirates’ roster.  Howard posted a 5.87 ERA over 23 innings with the Rockies in 2018-19 before being claimed off waivers during the offseason.  He moved exclusively to relief pitching in 2019 after mostly working as a starter in his five previous pro seasons in Colorado’s farm system, and Howard has also displayed some reverse-splits tendencies over his career.

In Ponce’s case, this will be his first time in the big leagues.  A second-round pick for the Brewers in the 2015 draft, Ponce came to Pittsburgh as the return for Jordan Lyles last July, and Ponce owns a 3.83 ERA, 3.36 K/BB rate, and 8.0 K/9 over 418 2/3 minor league innings.  He has worked as both a starter and reliever in the minors, so Ponce could potentially get some rotation work for the Bucs either as a proper starter or as part of a piggyback system.

The Pirates set their roster in advance of the 2019 Rule 5 Draft tonight, selecting the contracts of right-handers Blake Cederlind and Cody Ponce as well as infielders Ke’Bryan Hayes, Will Craig and Oneil Cruz. In a corresponding series of moves, the Pirates have designated lefty Williams Jerez and right-handers Dario Agrazal, Montana DuRapau and Luis Escobar for assignment.

Of the four players designated for assignment, Agrazal had the largest workload with the Pirates in 2019, pitching 73 1/3 innings but struggling to a 4.91 ERA, 5.0 K/9, 2.2 BB/9 and a 39.9 percent grounder rate. Each of the other three posted an ERA north of 7.00, though Escobar and Jerez each threw fewer than six innings. The 27-year-old DuRapau, meanwhile, enjoyed an outstanding season in Triple-A but allowed 18 runs in 17 1/3 innings at the MLB level.

Hayes, 23 in January, is fresh off a .265/.336/.415 season and against much older competition in Triple-A. Regarded as one of baseball’s premier defensive prospects, Hayes is considered to be among the top farmhands not just in the Pirates’ system but in the entire game.

Cruz, too, has generated some top 100 fanfare and just put the finishing touches on a huge but shortened season, hitting a combined .298/.356/.475 in 73 games. The towering 6’7″ Cruz, acquired in the 2017 trade that sent Tony Watson to the Dodgers, received 80 grades in arm strength and raw power from Eric Longenhagen and Kiley McDaniel of FanGraphs on their midseason rankings, where he checked in at No. 34 in MLB.

Ponce, acquired from the Brewers in this summer’s Jordan Lyles swap, averaged nearly 10 strikeouts per inning out of the bullpen. Cederlind, also 23, had a solid year out of the ’pen and reached the Triple-A level for the first time. Craig had a down season in Triple-A but has long been considered to be among the top 15 prospects in the Pittsburgh farm and will give them some near-term corner infield depth.

We’re going to see a whole lot of players added to 40-man rosters in advance of tonight’s deadline to protect players from the Rule 5 draft. We will use this post to track those contract selections from National League teams that are not otherwise covered on the site.

2:17pm: The teams have announced the deal.

2:02pm: The Brewers have reached a deal to acquire right-hander Jordan Lyles from the division-rival Pirates, reports Ken Rosenthal of The Athletic (via Twitter). Milwaukee will send Double-A right-hander Cody Ponce to Pittsburgh in return, tweets Robert Murray of The Athletic. 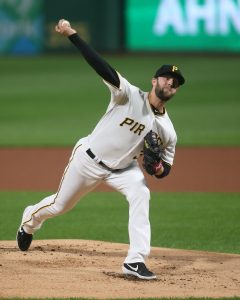 It’s the second straight season that Brewers general manager David Stearns has acquired Lyles, as the Brewers also picked him up in an August waiver deal a season ago. He tossed 16 1/3 innings of 3.31 ERA ball out of the Milwaukee ’pen down the stretch last season before hitting free agency and inking a one-year, $2.05MM deal with the Pirates as a free agent. He’s still owed about $705K of that sum between now and season’s end.

That contract looked like a steal for the first couple months of the season, as Lyles pitched to a 3.09 ERA with a 61-to-19 K/BB ratio in 57 innings through the end of May. He missed time with a hamstring injury last month and has struggled mightily with control issues dating back to early June, however. In 27 innings across his past seven outings, Lyles has been torched for 30 earned runs on 46 hits (including 11 home runs) and 14 walks. He’s still whiffed 34 hitters in that time, maintaining his career-best strikeout tendencies, but the Brewers will obviously be looking for a way to bring back the April/May Lyles rather than the June/July iteration that has manifested.

Clearly, the Brewers aren’t putting much stock in Lyles’ earned run average — few, if any, front offices do at this point — and are instead betting on the career-best strikeout rates and Lyles’ increased reliance on his curveball. It’s a relatively low-profile pickup but one that’ll give Milwaukee a much-needed arm to help stabilize an increasingly worrisome rotation. Brandon Woodruff will be out until September with an oblique strain, and Jhoulys Chacin just hit the injured list within the past few days due to a lat strain. Jimmy Nelson is also on the shelf due to an elbow issue.

Ponce, 25, was the Brewers’ second-round pick back in 2015 but isn’t regarded among the organization’s top tier of prospects. He is, however, in the midst of a strong season in Biloxi, having pitched to a 3.29 ERA with a 44-to-12 K/BB ratio and a 56.5 percent ground-ball rate in 38 1/3 innings out of the bullpen. The 6’6″ inch, 240-pound Ponce ranked as the Brewers’ No. 27 prospect on the offseason, per Baseball America, and BA pegged him 25th among Brewers farmhands on their recent midseason update of their farm system.