The Astros have inked free-agent righty Hector Rondon to a two-year, $8.5MM pact. Rondon, an Octagon client, was non-tendered by the Cubs earlier this month. Now, he’s lined up for successive $4MM and $4.5MM salaries in Houston, where he’ll represent an arm with closing experience to help fortify the back of the bullpen. 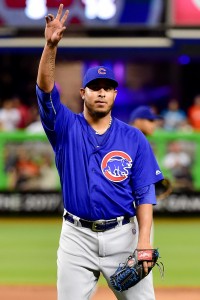 Rondon, 30 in February, saved 77 games with a 2.44 ERA, 9.3 K/9 and 1.9 BB/9 with the Cubs fro 2014-16. He initially lost the closer’s role in Chicago through little fault of his own, as he was bumped from that spot when Chicago acquired Aroldis Chapman from the Yankees prior to the 2016 non-waiver trade deadline.

The 2017 season was Rondon’s worst since the 2013 campaign (when he was a Rule 5 pick out of the Indians organization), as he turned in a 4.24 ERA with a 3.1 BB/9 mark — both his highest levels since that rookie season. However, Rondon also logged a career-high 10.8 K/9 and 29.1 percent overall strikeout rate in 2017 while maintaining excellent fastball velocity (average of 96.4 mph) and an above-average ground-ball rate (48.3 percent).

Like many pitchers throughout the league, Rondon has become increasingly susceptible to home runs across the past two seasons, averaging 1.5 HR/9 despite being extremely stingy in that regard throughout the first three seasons of his career. His increased vulnerability to the long ball obviously made the uptick in walks this past season all the more damning, though metrics like xFIP (3.43) and SIERA (3.20) remained generally bullish on his abilities.

Houston has already reportedly added to its supply of late-inning arms by striking a deal for sidearm righty Joe Smith, and Rondon will give them another option to pair with the likes of Ken Giles, Chris Devenski and Will Harris in the late innings. Giles, who served as the team’s closer throughout the season, struggled in the playoffs, though the addition of Rondon wouldn’t seem to supplant him from that ninth-inning role. If Giles’ struggles carry over into the 2018 campaign, though, Rondon would certainly be a plausible alternative for manager A.J. Hinch to get the final few outs of a game, given his extensive experience in Chicago.

With a pair of relief signings being wrapped up, the Phillies seem to feel good about that aspect of their roster. Per MLB.com’s Todd Zolecki, via Twitter, the team will turn its gaze to improving the rotation. Both they and the Yankees checked in with the Diamondbacks regarding right-hander Zack Greinke, Robert Murray of FanRag writes. Greinke ending up with either club is unlikely, however, sources informed Murray. With the Rangers also having shown interest in Greinke, we now know at least three teams have inquired about the expensive 34-year-old this offseason.

Greinke is the latest hurler to land on the radar of the Yankees, who have also eyed Pirates righty Gerrit Cole. Consequently, the Bucs “are gathering names of young, controllable” Yankees they could acquire in a Cole deal, though there’s “nothing close,” Bill Brink of the Pittsburgh Post-Gazette reports (on Twitter). Notably, Brink adds that the Yankees are also “looking at” Rays righty Chris Archer. The 29-year-old has drawn significant interest this winter, but it’s unclear whether the Rays will move him.

With lots of information flying around the Winter Meetings, let’s check in on a few interesting notes on the pitching market:

The open market welcomed 26 additional free agents Friday when various major league teams chose not to tender contracts to certain arbitration-eligible players. While no one is going to confuse the new members of this winter’s unsigned class with any of the top free agents, there are at least a few who could boost teams’ chances in 2018 and beyond. As Tyler Flowers, Steve Cishek and Welington Castillo have shown over the past couple years, a non-tender doesn’t have to be a career death knell.

Here’s a look at the best of this year’s group:

The Cubs will not tender a contract to reliever Hector Rondon, according to ESPN.com’s Jesse Rogers (via Twitter). MLBTR had projected Rondon to earn $6.2MM via arbitration — a price that was too high for Chicago and, evidently, other teams around the league.

Rondon, 29, made quite an impact as a former Rule 5 pick, turning in a quality three-year run for the organization between 2014 and 2016. Over 184 1/3 innings in that span, he turned in a 2.44 ERA with 9.3 K/9 and 1.9 BB/9. Though he ceded his closer role to Aroldis Chapman in the midst of the team’s World Series run, Rondon remained a major piece of the club’s late-inning mix.

That did not hold up in 2017, however, as Rondon ended the year with a 4.24 ERA in 57 1/3 frames. He struck out 10.8 batters per nine but also issued 3.1 free passes per nine innings and allowed ten long balls. Rondon did still deliver his average fastball in the 96 to 97 mph range, and turned in a personal-best 11.9% swinging-strike rate to go with a 48.3% groundball rate.

Rondon seemingly lost the confidence of skipper Joe Maddon, to the point that he did not factor in the late-inning mix during the team’s postseason run. While the Cubs’ decision to move on is not terribly surprising at this point, it’s a bit of a surprise to learn that the organization was not able to find a suitable trade partner. The one-year price tag is hardly cheap, but falls in the range of contracts that often go to somewhat less-accomplished pitchers. There’s plenty of reason to think that Rondon will catch on elsewhere, perhaps even earning consideration for high-leverage innings, but it seems he’ll need to settle for less money than the $6.2MM or so he might have expected through arbitration.

Red Sox skipper John Farrell says that DH/first baseman Hanley Ramirez underwent an MRI on his left biceps, as Pete Abraham of the Boston Globe tweets. A diagnosis and anticipated course of treatment aren’t yet available, but Abraham suggests the team is anticipating some absence from the veteran. The 33-year-old Ramirez has fallen off at the plate this year, slashing just .238/.320/.423 over his 522 plate appearances, with a shoulder problem seemingly bothering him throughout. The club surely hoped for a turnaround for the long-time slugger, but now there’s increasing uncertainty with this new injury.

Here are some other notes on injuries and other considerations that could impact postseason rosters:

Quite frankly, there were too many arbitration agreements today to reasonably stuff into one post. So here’s a rundown of the National League players that have avoided arbitration on smaller deals (American League deals here). You can see all of the arbitration “action” thus far in a sortable, filterable format by checking out MLBTR’s 2017 Arbitration Tracker. All projections referenced in this post are courtesy of MLBTR contributor Matt Swartz:

END_OF_DOCUMENT_TOKEN_TO_BE_REPLACED

The Cubs have already added Wade Davis and Brian Duensing to their bullpen, but they’re still trying to add depth, Gordon Wittenmyer of the Chicago Sun-Times writes. Ideally, they’d like to add another lefty, and they’ve been in touch with Travis Wood about returning.

But Wood’s agent, Darek Braunecker, says his client has attracted interest from seven NL teams, as ESPN’s Jesse Rogers noted today. Those clubs value Wood’s versatility and hitting ability (Wood has a career .182/.208/.314 line, strong for a pitcher), and Wood would also like another shot at starting, a chance he’s unlikely to get with the Cubs. So a return to Chicago is far from a certainty.

Another possibility for a left-handed addition to the Cubs’ bullpen is Jerry Blevins, who posted a 2.79 ERA, 11.1 K/9 and 3.2 BB/9 in 42 innings in a specialist role for the Mets last season, Wittenmyer writes. And the Cubs remain interested in righty Greg Holland, the former Royals closer who’s returning from Tommy John surgery and should be fully healthy for Spring Training. The team could also consider adding a bullpen piece in tomorrow’s Rule 5 Draft.

In the meantime, the Cubs’ addition of Davis will bump Hector Rondon back into a setup role, even though Rondon has had success as a closer in parts of each of the last three seasons. Manager Joe Maddon, though, says Rondon understands the move.

“He understands Wade being there,” says Maddon. “He was great. I told him how much I respect him. And he’s all about the team. It’s just one of those things.”