The Twins are leaning toward passing on high school right-hander/shortstop Hunter Greene with the top overall pick in the upcoming MLB draft, writes Jon Heyman of FanRag Sports. Greene has drawn quite a bit of fanfare over the past calendar year, due largely to his ability to reach triple digits with his fastball. However, he’d be the first high school right-hander ever selected with the draft’s top pick, and there’s a clear level of risk when selecting any prep arm near the top of the draft. Rather, the Twins are leaning toward Vanderbilt right-hander Kyle Wright, Heyman hears, with Louisville left-hander/first baseman Brendan McKay and prep shortstop Royce Lewis also under consideration. Baseball America’s John Manuel had the Twins selecting Wright in last week’s mock draft, while MLB.com’s Jonathan Mayo had Greene tabbed as the Twins’ selection in his own mock draft from that same day.

A few more notes from the division…

Long-time Cubs righty Carlos Zambrano will return to the hill, per Bruce Levine of 670thescore.com (via Twitter). At this point, though, there’s no indication he has his sights set on a return to the majors; rather, the soon-to-be-36-year-old will suit up for Venezuelan Winter League action. Zambrano last pitched in the majors in 2012 and spent time in the minors in 2013 before hanging up his spikes. Before that, he threw 1,826 2/3 innings of 3.60 ERA ball for the Cubs from 2001 through 2012.

Let’s take a look at the latest from the game’s central divisions:

Indians second baseman Jason Kipnis was hit by a pitch on his left hand during a rehab outing tonight, as Jordan Bastian of MLB.com tweets. He’s expected to sit out at least one contest, though at this point there’s no indication that he has suffered a significant injury. Cleveland is no doubt looking forward to the return of Kipnis, who is working back from a shoulder injury. As Bastian writes, the club’s bats have stalled in the early going.

Orioles scout Todd Frohwirth passed away Sunday at the age of 54, the team confirmed. Frohwirth had worked as a scout with the club since 2003, and he was previously a reliever with the O’s from 1991-93. He also pitched for the Phillies and Angels during his career, which spanned from 1987-96. Orioles legend Jim Palmer tweeted Sunday that Frohwirth “could light up a room,” and the team announced it will honor him with a moment of silence before its game Monday. MLBTR joins those around the baseball world in extending our condolences to Frohwirth’s family, friends and organization.

Ian Kinsler’s stance on his limited no-trade clause — that he’d want an extension to waive it, per his agent — seemed to complicate potential trade talks between the Dodgers and Tigers. But it was never known just what kind of new contract he’d have sought, and the veteran second baseman suggested today that the trade protection wouldn’t have posed a major barrier, as MLB.com’s Jason Beck reports. “I don’t think that was going to stand in the way of a trade,” said Kinsler, who seems likely to open the season with Detroit. It wouldn’t have been preferable to veto a deal and end up back with the Tigers, he noted, explaining that “it’s just kind of awkward to have a trade in place and then have it fall through.” After praising GM Al Avila for his handling of the matter, Kinsler said of the no-trade clause: “[W]hen you have protection, you need to use it. That’s what it’s built in for. That’s how I was going to go about it.” The organization has largely held pat with its veterans, despite prior suggestions that some kind of sell-off might occur this offseason, and Beck writes that the core players seem relieved and excited at the prospect of at least one more run together.

The Rays announced that they’ve traded outfielder Mikie Mahtook to the Tigers in exchange for a player to be named later or cash. Detroit, too, has announced the move, adding that fellow outfielder Anthony Gose has been designated for assignment to clear a spot on the roster for Mahtook. 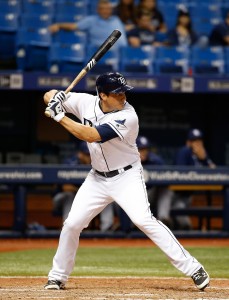 Tampa Bay selected Mahtook, now 27, with the 31st overall pick in the 2011 draft, but the LSU product struggled in his second stint against Major League pitching this past season. Mahtook debuted in 2015 and batted an impressive .295/.351/.619 with nine home runs in just 115 plate appearances, but he’d never shown that type of power throughout his minor league tenure. Mahtook’s bat regressed (and then some) in 2016, as he received 196 Major League plate appearances but slashed just .195/.231/.292 with three homers over the life of 65 games. A broken left hand did sideline Mahtook for a good portion of the 2016 season, though it doesn’t seem likely that the injury had much to do with his lack of production, as Mahtook wasn’t performing at the plate even prior to being hit by the pitch that ultimately caused the fracture.

Defensively, Mahtook is capable of playing all three outfield spots and has split his time across all three slots fairly evenly (though he’s played a slight bit more in center than in either outfield corner). Mahtook has been primarily a center fielder throughout his minor league career, so he’ll give the Tigers an option in center field for the team to consider. And it should be noted that he does come with a sound track record of performance in Triple-A, where he’s batted .277/.342/.420 with 17 homers and 33 steals (40 tries) in 1088 plate appearances.

Mahtook will compete with out-of-options Tyler Collins and his former college teammate, JaCoby Jones, for playing time in center field. He could also serve as a right-handed complement to Collins in a platoon setting. Mahtook does have a minor league option remaining, so the Tigers can also send him to Triple-A for further refinement if he struggles this spring.

As for Gose, his time with the Tigers has long looked to be in jeopardy. Though the 26-year-old has been mentioned by GM Al Avila as an option in center field at times this offseason, he’s out of minor league options and hasn’t hit in the Majors with the Tigers since being acquired from the Blue Jays in exchange for Devon Travis two years ago. The fleet-footed Gose has batted just .247/.315/.363 with Detroit. That includes a .209/.287/.341 slash in 30 games last season and an even more disheartening .203/.276/.312 slash in 90 games between Triple-A and Double-A. Beyond his on-field struggles, Gose also received a brief, team-issued suspension due to a dugout altercation with Triple-A skipper Lloyd McClendon (followed by a demotion to Double-A).

As for the Rays, the trade of Mahtook opens a spot on the 40-man roster which could clear way for fellow outfielder Colby Rasmus, who has reportedly agreed to a one-year deal with Tampa Bay that has yet to be formally announced. The Rays are also reportedly nearing a Major League deal with right-hander Shawn Tolleson, so Mahtook’s spot could go to him as well. Either way, it seems that the Rays stand to make at least one additional 40-man roster tweak in the days to come.

Newly acquired Red Sox ace Chris Sale’s unorthodox delivery hasn’t posed any significant problems to this point, as he has exceeded the 200-inning mark in three of his five seasons as a starter and combined for 386 frames in the other two campaigns. Asked if that delivery will lead to trouble down the road, Sale’s former pitching coach with the White Sox, Don Cooper, told Nick Cafardo of the Boston Globe, “He knows himself really good. His delivery is solid.” Cooper added, “Chris Sale has three above-average major league pitches that he pours in and throws strikes. I don’t want to sound cocky, but I don’t think anyone saying stuff has a better idea about his delivery than me.” Cooper then lavished further praise on the 27-year-old Sale, who he thinks landed with the right club. “He’s put up Hall of Fame-credible numbers. And now he’s going to a team that is sparing no expense,” said Cooper. “Nothing stands in the way of them putting together the best team. He’s going to a team where he has a chance to put up even more wins. If he has 10 years like he’s had, he has a chance to have a Hall of Fame career.” Cooper had plenty more to say about Sale, so checking out Cafardo’s piece to read all of the pitching guru’s comments is highly recommended.

Following the Tigers’ decisions to exercise closer Francisco Rodriguez’s option and to trade center fielder Cameron Maybin to the Angels for pitcher Victor Alcantara, the team issued a statement with quotes from GM Avila. In the wake of Maybin’s departure, the team will sort through various options at center field next season, Avila says.

“We will weigh our options as far as center field is concerned for next season,” says the GM. “There will be a wide open competition starting in the spring and we’ll see how it plays out.”

The team’s options at center field could include JaCoby Jones, Tyler Collins and Anthony Gose. All three, though, come with drawbacks. Jones mostly played infield in the minors, has limited experience above Double-A and batted just .243/.309/.356 while striking out in 29.9% of his plate appearances at Triple-A Toledo last year. Collins posted a .687 OPS for Detroit last season and fared even worse at Toledo. And Gose also failed to hit, batting .209/.287/.341 in the big leagues in 2016. In contrast, Maybin’s 2016 season was a highly successful one, and it appears the Tigers will miss his .383 OBP in particular. Avila’s comments don’t preclude the possibility that the Tigers could expand their search for a center fielder outside the organization, however.

Regarding Rodriguez, Avila says, “We liked the job K-Rod did last season and the numbers show he was a reliable closer for us. He stabilizes the back end of our bullpen and provides veteran leadership to our younger bullpen arms.” The 34-year-old K-Rod figures to close for the Tigers next season, unless the Tigers decide to put him on the trade market.

The Astros will not be calling up Alex Bregman to join the team in Seattle this weekend, manager A.J. Hinch said in an appearance on MLB Network Radio on SiriusXM (Twitter link). A report from last night indicated that Bregman was “expected” to be promoted right out of the gate following the All-Star break, but Hinch’s more definitive comments put that rumor to bed for the time being. The Houston skipper does note that Bregman can help his team at some point in the second half and even went so far as to specify “probably in the near future.” The 2015 No. 2 overall pick is hitting .309/.416/.603 with 19 homers between Double-A and Triple-A this season and homered five times while posting a 1.310 in eight Triple-A games following his recent promotion to the top minor league level.

A few more notes from the American League…