The Mets and Marlins discussed a change-of-scenery trade that would have sent Jason Bay to Miami for Heath Bell and John Buck, reports Ken Rosenthal of FOX Sports. A deal was never close, though the contracts and the money matched up well. Bell is signed through 2014, Bay and Buck through 2013. Rosenthal notes that all three players are likely to clear waivers this month, so the two sides could revisit the deal. Here are the rest of his rumors…

5:05pm: Two teams told ESPN.com's Jayson Stark that the Marlins thought they had traded Lee to the Yankees today (Twitter link).  However, Lee wouldn't waive his no-trade clause.  The sides were never close to completing a trade, ESPN.com's Buster Olney writes (on Twitter).

10:40am: The Marlins are trying to unload first baseman Carlos Lee, tweets Danny Knobler of CBS Sports.  At this stage in his career, Lee is a low-power 36-year-old with little defensive value, so teams might view him as a right-handed bench bat.  The Marlins added Lee earlier this month, with the Astros paying most of his $18.5MM salary.

Links from around MLB, on the eve of the non-waiver trade deadline…

The Athletics, Orioles, Pirates and Indians are pursuing Chase Headley most aggressively, ESPN.com’s Jayson Stark reports. The Pirates and Indians seem less motivated to complete a deal now, but the A’s and Orioles haven’t backed off. The Diamondbacks, Phillies and Yankees checked in on Headley, and the Dodgers were seriously interested until they traded for Hanley Ramirez. Here are the rest of Stark’s rumors…

The Marlins traded Omar Infante and Anibal Sanchez to Detroit yesterday in what could be the first in a series of trades. Marlins officials have told other teams they are “open for business,” Ken Rosenthal of FOX Sports reports. Hanley Ramirez, Carlos Lee, Josh Johnson, Ricky Nolasco and Randy Choate are already drawing trade interest.

The Marlins intend to complete trades that make sense from an on-field perspective, Rosenthal reports. Miami, which now has a 45-51 record, isn’t looking to dump salaries. The Marlins will absolutely try hard to move Heath Bell, but they’re not optimistic about the chances of completing a trade involving their newly-signed closer, Rosenthal reports. Bell is in the first year of a three-year, $27MM contract signed last offseason.

The Athletics have jumped into trade talks for Ramirez, Bob Nightengale of USA Today reports (on Twitter). The Blue Jays and Red Sox are also involved, according to Nightengale. The Marlins are open to moving Ramirez, but they’re likely to keep Johnson, who’s coveted by other teams.

Ken Rosenthal of FOX Sports has a bunch of new rumors for us today in a pair of videos. Let's round 'em up…

The Astros sent Carlos Lee to the Marlins for prospects Matt Dominguez and Rob Rasmussen in a deal that was announced earlier today. The trade provides the Marlins with much needed stability at first base and gives the Astros two more young pieces as they continue to build for the the future. Here are some reactions to the deal: 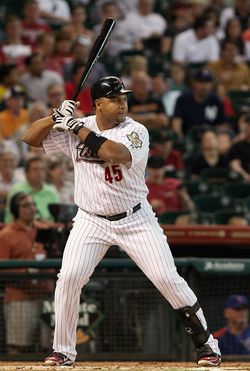 With Chris Carpenter set to undergo season-ending surgery to repair a nerve condition in his shoulder, Ken Rosenthal of FOX Sports writes that the Cardinals are in the market for at least one starter and one reliever. St. Louis has trade chips though the new collective bargaining agreement doesn't allow teams to recoup draft pick compensation for rental players, changing the landscape.

Let's round up the rest of Rosenthal's rumors…