Here are a couple of links regarding potential free agent third basemen, with a note about an outfielder for good measure:

The tightest division race in the National League is happening out west, where the Diamondbacks have taken a two-game lead over the Giants on the strength of five straight wins. ESPN.com's Buster Olney (Insider link) likens Arizona to a No. 14 seed in an NCAA tournament, holding a lead late in the game and gaining confidence that they can pull off an upset. Here are this morning's notes from around the NL West:

Before the season, MLBTR writers identified 13 players who were set for 'make or break' years. These players had experienced ups and downs in their respective careers and were positioned to re-establish themselves as difference makers at the Major League level and set themselves up for success in free agency.

We checked in on the players at the quarter pole of the campaign and let's do it again now that we're midway through the season (all links go to the MLBTR posts):

The latest from Nick Cafardo of the Boston Globe…

The trade market is still developing at this point in the season, but it’s starting to take shape. Buster Olney outlines the plans for National League teams in a highly recommended insider-only piece at ESPN.com. Here are the details:

Before the season, MLBTR writers identified 13 players who were set for 'make or break' years. These players had experienced ups and downs in their respective careers and were positioned to re-establish themselves as difference makers at the Major League level and set themselves up for success in free agency. Now that we're at the quarter pole for the 2011 season, let's check in on the lucky 13 players (all links go to the MLBTR posts): 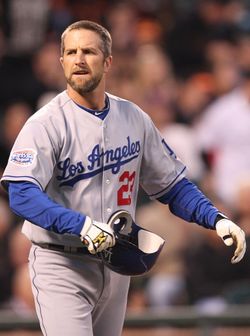 It's not quite as bad as Zambrano-for-Kazmir, but you have to think that Dodgers GM Ned Colletti would love to have a do-over on the trade that sent Carlos Santana and Jon Meloan to the Indians for Casey Blake and about $2MM in 2008. Two-and-a-half years later, Santana has developed into one of the two best young catchers in baseball while Blake finds himself at a career crossroads.

The Dodgers owe Blake a reasonable $5.25MM in 2011, then must decide whether to exercise his $6MM club option for 2012 or buy him out for $1.25MM. Given his declining performance and age, the latter looks more likely right now. The free agent market for players in their late-30's and relegated to the corner infield spots is not robust, so the best case scenario for Blake likely has him playing well enough that the team picks up that option.

If there were any doubts about how much trade deadline acquisitions can affect the postseason, last night's Giants/Braves contest silenced them. A pair of former Royals, Rick Ankiel and Kyle Farnsworth, helped lead Atlanta to victory, while ex-Red Sox Ramon Ramirez gave up Ankiel's game-winning blast. As we prepare for another round of playoff baseball tonight, let's check out a few links….

It's been an eventful week for the Dodgers, with news that Don Mattingly will replace Joe Torre as the team's manager. Let's check out a few more updates out of Los Angeles, as the club prepares for the offseason….

Links for Wednesday, after a roller coaster win by Joey Votto and the Reds…