The Cubs announced that infielders Esteban Quiroz and Jared Young have cleared waivers and been outrighted to Triple-A Iowa.

Quiroz, 31 in February, played in the Mexican League for years and didn’t sign with an affiliated ball club until he was almost 26. He spent time in the organizations of the Red Sox, Padres and Rays before coming to the Cubs in the Harold Ramirez trade. He was selected to the big league roster in September and was able to make his MLB debut as the season was winding down. He hit .275/.370/275 for a wRC+ of 95 over 14 games in that brief audition.

Players have the right to reject outrights assignments if they have three years of MLB service time or have previously been outrighted in their career. Since neither player qualifies, they will remain in the Cubs’ organization as depth but without taking up a roster spot.

The Cubs are making a batch of roster moves prior to today’s game, per reporter Mark Gonzales. Right-hander Adbert Alzolay has been reinstated from the 60-day injured list while infielder Esteban Quiroz has had his contract selected. In corresponding moves, outfielder Seiya Suzuki was placed on the paternity list while left-hander Sean Newcomb and first baseman Frank Schwindel were designated for assignment.

Quiroz, 30, has taken an unusual path to the big leagues as he was playing in the Mexican League for years, not signing with an affiliated club until he was nearing his 26th birthday. He’s spent time in the minor league systems of the Red Sox, Padres and Rays, before coming to the Cubs as part of the Harold Ramirez trade in March. He’s only been healthy enough to get into 40 Triple-A games this season, hitting .212/.358/.322 in that time for a wRC+ of 89. However, he’s been much better since returning from the injured list at the start of August, hitting .299/.450/.442 in that time. He’s played second base and third base this year, though has also played some shortstop in previous season and some outfield work back in Mexico.

With the Cubs well out of contention and just over two weeks remaining on this year’s schedule, they can use those games to audition players for future roles on the team. Quiroz will jump into an infield mix that also includes Zach McKinstry, Christopher Morel, Patrick Wisdom, Alfonso Rivas, David Bote and Nico Hoerner, though Hoerner might not be a factor for a while. He’s missed time recently with an injury and an MRI just revealed a moderate right triceps strain, per Gonzales. “It was a little worse off than we thought,” manager David Ross told Gonzales.

Schwindel, 30, got a nice stretch of play last year after the Cubs traded away many of their regular at the deadline. He made the most of that opportunity, hitting 14 home runs in 64 games, slashing an incredible .326/.371/.591 for a 154 wRC+. He couldn’t keep the fairy tale alive this year, however, as he’s hit just .229/.277/.358 for a wRC+ of 76. With the trade deadline passed, he’ll be placed on waivers in the coming days to see if any other team believes there’s more magic left in Frank the Tank.

Newcomb, 29, once seemed like a rotation stalwart in Atlanta but has fallen on hard times recently. He was bumped to bullpen work and eventually designated for assignment earlier this year, getting traded to the Cubs. The change of scenery hasn’t helped much as Newcomb has a ghastly 8.78 ERA in 27 2/3 innings this year, walking 14.2% of batters faced in the process. This is the second time the Cubs have designated him this year, with the previous instance resulting in Newcomb clearing waivers and accepting an outright assignment. Based on his unfortunate results this year, he’ll likely pass through waivers unclaimed again. With minor league seasons winding down, it’s possible he could accept another outright and make a couple of appearances in the minors, though it’s also possible he just decides to get an early start on free agency.

The Rays have acquired outfielder Harold Ramírez from the Cubs in exchange for minor league infielder Esteban Quiroz, according to announcements from both teams. Tampa Bay announced they’ve placed reliever Nick Anderson on the 60-day injured list to open space for Ramírez on the 40-man roster.

The move brings Ramírez’s Chicago tenure to an end before he ever suited up for the team. The Cubs acquired the right-handed hitting outfielder from the Guardians in exchange for cash in late November. That came after Cleveland had designated him for assignment in advance of Rule 5 protection day, part of an overhaul of more than a quarter of the Guardians’ 40-man roster. 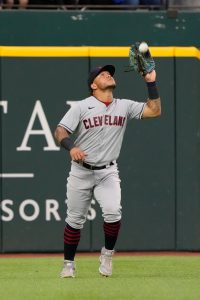 While Ramírez didn’t play in a game with the Cubs, he has logged a fair bit of MLB action over the past few seasons. A former Blue Jays’ farmhand, Ramírez debuted in the majors with the Marlins in 2019. He hit .276/.312/.416 in 119 games as a rookie, but he missed almost all of the following season after suffering a severe hamstring strain. Cleveland picked him up off waivers in February and gave him 361 plate appearances, and his .268/.305/.398 line wasn’t much different than his 2019 performance.

The 27-year-old Ramírez has a career .271/.308/.405 mark in a bit more than 800 plate appearances. He makes a fair amount of contact, leading to a solid batting average. Yet he’s paired that with a minuscule 4% walk rate and a below-average .134 ISO (slugging minus average). Ramírez’s 47.2% hard contact percentage and 91.3 MPH average exit velocity were more impressive than those bottom line power numbers might suggest, but he negated a good bit of that batted ball authority by putting more than half his balls in play on the ground.

Ramírez adds an affordable option to the Tampa Bay outfield. He’ll play the 2022 campaign on just a $728K salary and is controllable via arbitration through 2025. The Rays could keep him around as a long-term piece, but he’s also out of minor league option years. That means Tampa Bay must either carry him on the active roster all season or DFA him themselves.

Whether Ramírez sticks long-term could be determined by what the Rays have planned for the coming weeks. The outfield is already pretty crowded, with Randy Arozarena, Kevin Kiermaier and Manuel Margot lined up as the projected starting group. Austin Meadows will see some time in the corners and at designated hitter, while the out-of-options Brett Phillips and top prospect Josh Lowe figure to be in the mix. It may be tough to carry both Phillips and Ramírez in depth capacities all season, but the former is a better defensive option off the bench. Ramírez has some experience in center field but is better suited for the corners.

Of course, it’s possible the Rays deal from the outfield logjam before the season. Meadows, in particular, has been floated in trade rumors since the lockout was lifted. The front office isn’t going to be pressured to deal one of their regulars because they picked up Ramírez in a minor trade, but today’s deal could be a preemptive move to bolster the outfield depth in case another swap on the horizon.

From the Cubs’ perspective, the pair of Ramírez trades essentially amounts to picking up Quiroz for cash. Despite never having appeared in the majors, Quiroz is actually a few years older than Ramírez. At 30 years old, the lefty-hitting infielder isn’t a prototypical prospect. Yet he has a long track record of performing well in both the Mexican League and in the high minors, one that has caught the attention of a handful of clubs.

Originally signed by the Red Sox out of Mexico, Quiroz was dealt to the Padres for Colten Brewer over the 2018-19 offseason. Tampa Bay picked him up in March 2020 as the player to be named later in the Tommy Pham, Jake Cronenworth, Hunter Renfroe deal. Listed at 5’6″, 199 pounds, he doesn’t have overwhelming physical tools. Yet Quiroz owns a .270/.391/.534 line in his Triple-A career, including a .268/.401/.526 mark with the Rays’ top affiliate in Durham last season. Quiroz won’t occupy a spot on the Cubs 40-man roster; he’ll presumably head to Triple-A Iowa and keep trying to earn an MLB debut.

Anderson’s placement on the 60-day IL was a formality whenever the Rays needed a roster spot. The righty underwent a UCL brace procedure last October that was always expected to keep him out of action past the All-Star Break.

The 28-year-old Quiroz is a longtime veteran of the Mexican League, only joining a big league organization after signing a minors deal with the Red Sox in the 2017-18 offseason.  A year later, Quiroz was swapped to the Padres in exchange for Colten Brewer, and is now on the move again to Tampa.  All the while, Quiroz has done nothing but hit since joining the affiliated ranks, with a .274/.390/.541 slash line and 26 home runs over 499 combined plate appearances at the Double-A and Triple-A levels in the Boston and San Diego farm systems.

Quiroz obviously has a significant age and experience advantage over virtually all of his minor league counterparts, plus his Triple-A performance in 2019 (a .923 OPS in 366 PA) has the twin caveats of coming in the hitter-friendly Pacific Coast League, and during the unprecedented offensive explosion that was the 2019 Triple-A season.  That being said, Quiroz also had a strong track record at the plate before reaching the minors, hitting .293/.402/.451 over 1573 career plate appearances in the Mexican League.  Quiroz only had 38 homers in those 1573 PA, so while it’s probably fair to say that his power game was aided by the Triple-A ball, his on-base skills and overall approach at the plate seems to be translating well.

As a left-handed hitter who seems just about big league-ready, Quiroz is another intriguing addition to the Rays’ depth chart.  Brandon Lowe and Joey Wendle, two other lefty bats, are seemingly ahead of Quiroz in terms of second base duty, though all three players have enough multi-positional flexibility that the Rays (who mix and match their lineups as much as any club in baseball) can conceivably find at-bats for any of them.  Quiroz has mostly played second base over the last two seasons, though he has played shortstop and third base during his time in the Mexican League.

Looking at the five-player deal as a whole, the Rays dealt away the more accomplished MLB performer in Pham, though Pham is also older, more expensive, and perhaps a bit less defensively adept than Renfroe.  While Cronenworth is a solid prospect in his own right, Edwards and Quiroz represents a nice return for Tampa Bay, as the Rays get a near-term option in Quiroz and more of a longer-term player in Edwards.

After you get your turkey in the oven, feel free to check in on a few notes from around baseball.

The San Diego Padres were busy this week in shaping their 40-man roster ahead of December’s Rule 5 draft. The release of former prospect Cory Spangenberg and Christian Villanueva’s transpacific journey to the Yomiuiri Giants prefaced further roster reshaping via a pair of minor-league swaps. Fangraphs’ Eric Longenhagen reviews the prospects in those deals and others involved in swaps from this past week: Walker Lockett, Ignacio Feliz, Colten Brewer, Esteban Quiroz, Rowan Wick, Jason Vosler, Jordan Foley, Jefry Valdez and Tanner Anderson. While these moves appear minor, many of these players will have the opportunity to make an impact for pennant contenders next fall if they can impress their new gatekeepers in Cleveland, Colorado, New York, Boston and Chicago, respectively. Further Rule 5 news and more from around the league…