It’s not always fair to judge baseball operations leaders for free agent signings.  In many cases, the biggest contracts are negotiated to varying extents by ownership.  The same can hold true of major extensions.  It’s just tough to know from the outside.

There’s obviously involvement from above in trade scenarios as well.  But, when it comes to exchanging rights to some players for others, it stands to reason the role of the general manager is all the more clear.

In any event, for what it’s worth, it seemed an opportune moment to take a look back at the trade track records of some of the general managers around the game. We’ve already covered the Diamondbacks’ Mike Hazen, former Astros GM Jeff Luhnow, the Brewers’ David Stearns, the Angels’ Billy Eppler, the Rockies’ Jeff Bridich, the White Sox’ Rick Hahn, the Tigers’ Al Avila, the Braves’ Alex Anthopoulos, and the Padres’ A.J. Preller. We’ll now turn our focus to Ross Atkins of the Blue Jays, who followed Jays president Mark Shapiro in moving to the Toronto organization from Cleveland. (Deals are in chronological order and exclude minor moves; full details at transaction link).

How do you grade the overall work on the trade market? (Poll link for app users.) 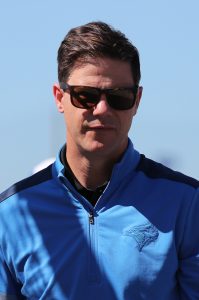 END_OF_DOCUMENT_TOKEN_TO_BE_REPLACED

Blue Jays general manager Ross Atkins discussed some of his team’s offseason plans in an end-of-season chat with reporters (including the Athletic’s John Lott, and Sportsnet.ca’s Shi Davidi and Ben Nicholson-Smith) on Tuesday.  Some of the highlights…

The latest from Toronto…

There may not have been any formal extension negotiations between the Blue Jays and Josh Donaldson, but that doesn’t mean the Jays haven’t been exploring the possibility internally. To the contrary, GM Ross Atkins said at a recent PitchTalks event that the Blue Jays have placed their own valuation on Donaldson and suggested that the team has a good idea of how far it’d go in an effort to extend the former AL MVP (subscription link via The Athletic’s John Lott).

“We do have that number,” said Atkins during his presentation. “We have come up with a clear walkaway that we would be willing to commit to him to extend (the contract) for him to remain a Blue Jay probably for the rest of his career.”

Unsurprisingly, Atkins didn’t delve into the specifics of what that number would entail. Donaldson said recently that to his knowledge, the Blue Jays hadn’t engaged his agents at MVP Sports in extension talks, though one can imagine that the team will explore that possibility in the coming weeks once Spring Training gets underway. That’s typically the timeframe for players and clubs to negotiate extensions, though Donaldson could be one of the tougher players to pry away from free agency.

The 32-year-old got off to a slow start in 2017 but finished with an absurd .302/.410/.698 slash and 22 homers over his final 227 plate appearances, and he’s been on the short list of the AL’s best players for the past half decade. While Donaldson will hit the open market at an older age than most premier free agents, he’d still be primed for a massive contract in free agency, assuming a typically excellent year at the plate and in the field.

On a related note, Atkins also addressed the excruciatingly slow free-agent market, noting that teams appear to be less inclined than ever to push past their comfort levels to win the bidding on a player, calling it “good business to walk away and not [exceed] your value.” Atkins also touched on the fact that free agency tends to reward older players, noting that the “aging curve has been potentially overcompensated in the past.” Atkins did note that the Jays value experience (their signing of Curtis Granderson certainly seems to back that up). While other teams throughout the league surely do as well, it does seem as though the dollar amount associated with that value has declined in precipitous fashion.

How highly the Jays value the experience of Donaldson (financially speaking, that is) and how they’ll proceed with him will continue to be a pressing topic in Toronto for the next six months or more. If no long-term pact is worked out this spring, the question will shift from one of signing Donaldson long term to one of whether the Jays should trade the well-rounded slugger this summer.

Should the team finds itself buried in the AL East, that’ll be a fairly easy question, but if not, the Jays could face the unenviable task of balancing the short-term benefit of chasing down a Wild Card spot with the long-term benefit of bolstering their farm system with a franchise-altering trade of their best player. The Jays would have the option of making a qualifying offer to Donaldson and recouping some value in the 2019 draft, of course, but they’d almost certainly be able to top that value on the summer trade market.

Blue Jays general manager Ross Atkins met with reporters (including Sportsnet.ca’s Ben Nicholson-Smith and MLB.com’s Gregor Chisholm) today to discuss his team’s season and how the Jays plan to move forward going into the winter.  Some highlights…

Blue Jays general manager Ross Atkins met with the media today and addressed a number of topics, including qualifying offers for the team’s free agents, his club’s offseason needs, Jason Grilli’s club option and much, much more. Sportsnet’s Ben Nicholson-Smith was among the many on hand and relayed a number of highlights from Atkins’ media session (all links to Twitter)…