The Royals have designated right-hander Joel Payamps for assignment and optioned infielder Maikel Garcia to Triple-A Omaha, per a club announcement. That pair of moves will open roster space for Hunter Dozier to return from the paternity list and for righty Max Castillo to be recalled from Omaha. Castillo, whom the Royals acquired in the trade that sent Whit Merrifield to Toronto, will start tonight’s game in place of veteran Brad Keller, who has been moved from the rotation to the bullpen.

Payamps, 28, has been a solid member of the Kansas City bullpen this season, working to a 3.16 ERA with a 17.6% strikeout rate, an 8.5% walk rate and a hearty 53.3% ground-ball rate, all of which makes his DFA at least a mild surprise. Fielding-independent metrics aren’t quite as bullish on the righty, who’s benefited from an elevated 78.9% left-on-base rate and given up a fair bit of hard contact (40.9%). Still, Payamps is averaging a career-high 95 mph on his heater, keeping the ball on the ground at a career-best rate and sporting a career-best 10.1% swinging-strike rate.

It’s not an elite package of results and secondary marks, but Payamps has had a better year than the standard DFA casualty and figures to have a decent chance of being claimed on waivers. That’ll be the Royals’ only course of action, as he can’t be traded now that the deadline has passed. Payamps is controllable for another four years beyond the current season but is out of minor league options, so any team to claim him will have to carry him on the MLB roster.

Castillo, 23, slotted in as the Royals’ No. 24 prospect at Baseball America in their post-deadline reranking of the system. He made his big league debut with Toronto earlier in the season, appearing in nine games (two of them starts) and working to a 3.05 ERA with a 20-to-5 K/BB ratio in 20 2/3 innings. It’s been a strong season on the whole for Castillo, who notched a 3.10 ERA in Double-A before jumping to Triple-A and yielding six runs in 31 innings (1.74 ERA).

Castillo isn’t a power pitcher but has displayed solid walk and ground-ball rates while garnering praise for an above-average changeup and command of the strike zone. The Royals will take at least some of the remainder of the season to evaluate him as a potential rotation piece, though it’s always possible that he ultimately slots in as a multi-inning reliever or swing man. For now, he’ll join Zack Greinke, Brady Singer, Daniel Lynch and Kris Bubic on the starting staff.

The deal officially ends a run of more than a decade in the Kansas City organization for Merrifield, who entered pro ball as a 2010 draftee. He reached the big leagues in 2016 and had cemented himself as a regular by the following season. He’d spent the next few seasons as a top-of-the-order presence and consistently productive contact hitter. Merrifield twice led the American League in steals, twice more led the league in hits and was selected to a pair of All-Star Games. As recently as last season, he paced the circuit in doubles and swiped 40 bags, although his overall offensive output had begun to dip.

Merrifield’s production has continued to fall this year, as he’s amidst the worst offensive season of his career. He’s hitting .240/.290/.352 through 420 plate appearances, although that’s largely a reflection of a dismal April in which he hit .141/.190/.179. From May 1 onwards, he has a roughly league average .266/.315/.397 mark, striking out in only 14.9% of his plate appearances. He’s connected on just six home runs, but Merrifield brings a high-contact bat to the Jays lineup. 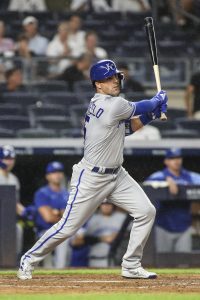 The 33-year-old is also a versatile defensive option capable of covering either of second base or in corner outfield. Public defensive metrics have been mixed on his performance at the keystone so far this season, but he’s typically a highly-regarded defender there. Santiago Espinal has had a nice season overall as the Jays primary second baseman, but he slumped offensively in July. Merrifield adds some cover there while also adding some extra right-handed depth to a bench that currently skews left-handed.

The Jays are a bit of a surprising destination for Merrifield, who was placed on the restricted list during a recent series while still with K.C. That indicates he wasn’t vaccinated against COVID-19 at the time — and was thus ineligible to cross the border — but Merrifield indicated he was open to receiving the vaccine to contribute to a playoff contender. General manager Ross Atkins declined to comment when asked about Merrifield’s vaccination status this evening (via Ben Nicholson-Smith of Sportsnet), but it’s difficult to imagine Toronto topping the trade market if they weren’t confident he’d be available for half their games.

Merrifield is under contract for another season and a half. He and the Royals agreed to a restructured deal just before Opening Day. He’s making $7MM this season, around $2.5MM of which is still to be paid out. He’ll receive a $6.75MM figure next season, and he’s due a $500K buyout on an $18MM mutual option for 2024. That’s a more than reasonable tab for the Jays if they believe Merrifield has put his rough April behind him.

Kansas City has resisted trade overtures on Merrifield for years, holding onto him throughout their recent rebuild. Amidst another down season and with his window of club control falling, however, president of baseball operations Dayton Moore and his staff finally made him available this summer. In exchange, they bring back a pair of young players with extended windows of club control who could contribute to the major league team shortly.

Castillo has already gotten to the big leagues, making his debut in mid-June. The 23-year-old righty has a 3.05 ERA through his first 20 2/3 frames, primarily working as a multi-inning option out of the bullpen. He’s punched out 24.7% of batters faced, induced grounders on more than half his batted balls, and only walked 6.2% of opponents. The Venezuela native has averaged around 93 MPH on his fastball and leaned heavily on his changeup during his limited big league time.

Baseball America recently named Castillo the #14 prospect in the Jays farm system, praising his feel for pitching and crediting him with average command. The outlet suggests his lack of a true plus offering is likely to relegate him to a back-of-the-rotation or swing role, but there’s still value in that kind of arm while he’s affordable. Castillo won’t reach arbitration-eligibility until 2025 at the earliest, and he still has all three minor league option years remaining. He gives the Jays an affordable rotation depth option for the coming seasons.

Taylor, 24, is an upper minors infielder. A former tenth-round pick, he’s played his way to Triple-A and had a decent season in Buffalo. Through 280 plate appearances, the righty-hitting second baseman owns a .258/.337/.426 line with nine home runs and 23 stolen bases. BA slotted Taylor 23rd in the Toronto farm system, writing that he could be a utility type in the big leagues. He’ll be eligible for the Rule 5 draft if he’s not added to the 40-man roster at the end of the season.

Mark Feinsand of MLB.com first reported the Royals were trading Merrifield, while Jon Heyman of the New York Post was first to report the Jays were the acquiring team. Feinsand was first with the return.

Castillo will make his Major League debut whenever he first gets in a game. Signed out of Venezuela, the 23-year-old has been with the Blue Jays since the 2016 season. He made it to Triple-A for the first time this season, posting a 0.66 ERA in 27 1/3 innings. This came after putting up a 3.10 ERA over six starts (29 innings) in Double-A. Despite the gaudy numbers, Castillo wasn’t on MLB.com’s, Baseball America’s, or Fangraphs’ list of Blue Jays top 30 prospects. He profiles as a reliever, despite mostly starting games throughout his minor league career.

Lawrence, 34, made just three appearances for the Blue Jays in his first bit of big-league action since 2018 with the Mariners. For his career, he owns a 6.38 ERA/5.10 FIP over 86 career innings with the Jays and Mariners, dating back to his debut in 2017.

The Blue Jays are going to select the contract of right-hander Max Castillo, per Alfonso E. Saer Gomez. The Blue Jays have an open spot on their 40-man roster, due to the outright of right-hander Bowden Francis, per his transactions tracker at MLB.com. A corresponding move on the active roster has not been announced.

An international signing of the Blue Jays out of Venezuela, Castillo made his professional debut in his age-17 season in 2016. Since then, he’s worked his way up the minor league ladder, working primarily as a starting pitcher. This year, between Double-A and Triple-A, he’s thrown 56 1/3 innings with a 1.92 ERA, 28.8% strikeout rate and 10.8% walk rate. There’s certainly some good fortune in there, as Castillo has a .203 BABIP and 89.8% strand rate on the year. Nonetheless, he’s showed enough to earn a spot on the club’s roster.

It’s not clear what role Castillo, 23, will play for the Jays, though the pitching staff has taken a hit in recent days with the Tommy John surgery of Hyun Jin Ryu. That has bumped Ross Stripling from a long relief role and into a primary rotation slot. Castillo could potentially head to the bullpen and attempt to take over the job of the long man out of the bullpen.

As for Francis, 26, acquired in the Rowdy Tellez trade, he was selected to the club’s 40-man roster in the fall, ahead of the Rule 5 draft that ended up getting canceled by the lockout. He made his MLB debut earlier this year, tossing two-thirds of an inning, but has spent most of his time in Triple-A. In 41 2/3 innings for Buffalo, he has an unfortunate 7.78 ERA. After regularly running strikeout rates of 23% or above in previous years, it’s slipped to 18.8% this year. His 11.7% walk rate is also a personal worst. There was no previous reporting of the team designating him for assignment, but he’s evidently cleared waivers and will now stay in the organization without occupying a roster spot.